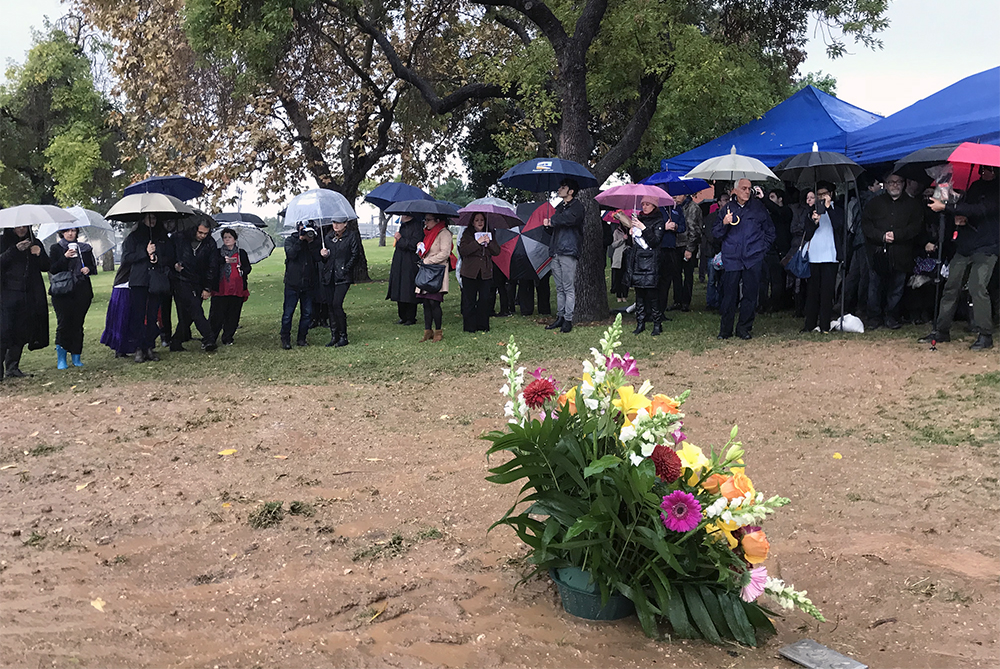 Dozens of people gather for an interfaith service honoring the unclaimed dead who were buried at the Los Angeles County Crematorium Cemetery on Dec. 4, 2019. RNS photo by Alejandra Molina
December 4, 2019
Alejandra Molina

LOS ANGELES (RNS) — Dozens of people gathered under blue tents in the pouring rain Wednesday (Dec. 4) for an interfaith service honoring the unclaimed dead who were buried at the Los Angeles County Crematorium Cemetery.

“Today is the day in which we as a community say, ‘We’ve kept the remains and now it’s time to put them in the earth,’” said the Rev. Chris Ponnet, who has coordinated the services for more than a decade.

The ceremony, in the Boyle Heights neighborhood of Los Angeles, was held in remembrance of those 1,457 who died in 2016 and whose cremated remains have stayed in the county’s possession for three years.

“These people came from different stories, from different spirit traditions,” said Ponnet, director of spiritual care at Los Angeles County-USC Medical Center. “I want to pay respect. That’s my goal, to get as diverse of a service as possible.” 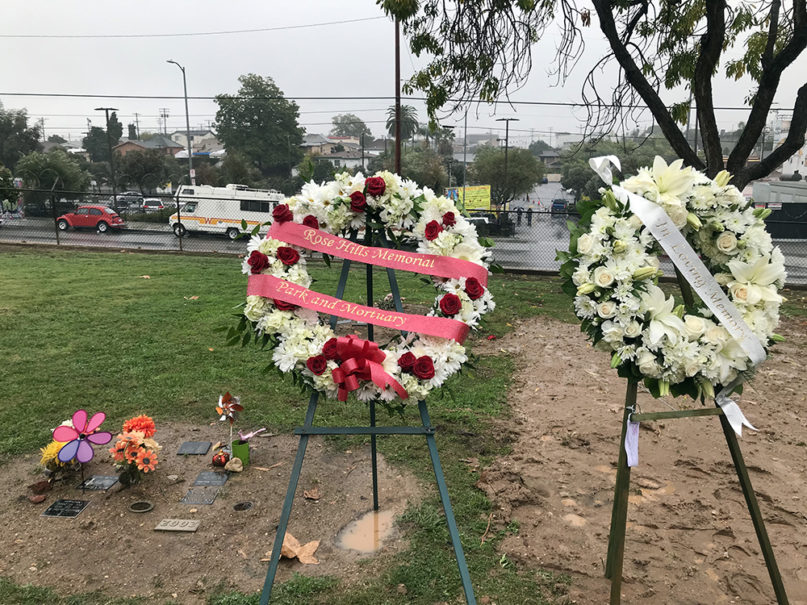 Wreaths stand near the burial ground of the cremated remains of 1,457 unclaimed dead from 2016 at the Los Angeles County Crematorium Cemetery. RNS photo by Alejandra Molina

The burial ground, in a Native American tradition, was blessed with sage during the ceremony. A rabbi read from Psalm 23 and Chaplain Nick Jordan recited the Christian Lord’s Prayer that was repeated by others in Spanish and Tagalog. Members of the Zen Center of LA led a Buddhist chant. Others recited a poem in honor of the city and its residents.

The Street Symphony Chamber Singers sang a piece by Maurice Duruflé as attendees paid their respects by burning incense that was then spread onto the burial ground where the cremated remains were put to rest.

The Rev. Elizabeth Gibbs Zehnder helped close the ceremony with a blessing call for the children, teenagers, adults, immigrants and others without a home who were unclaimed. As she called for the blessings, participants responded in Spanish with, "Presente." 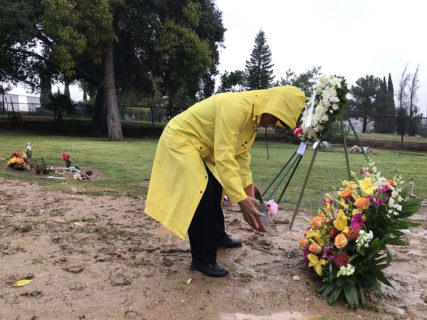 Burned incense is scattered on the burial ground of the cremated remains of 1,457 individuals who died in 2016 and were unclaimed. A service was held in their honor on Dec. 4, 2019, at the Los Angeles County Crematorium Cemetery. RNS photo by Alejandra Molina

For Alice Murray, with the Street Symphony Chamber Singers, it was important to participate in the ceremony because the unclaimed "deserve the honor of being buried in sacred ground."

"This represents Los Angeles," she said.

Murray was moved by the interfaith aspect of the service.

"I get something from every single faith. It all comes together in this beautiful moment," she said. "That, I think, is what is the most significant about it.

This was the fifth such gathering for Jordan, the chaplain who recited the Lord's Prayer. 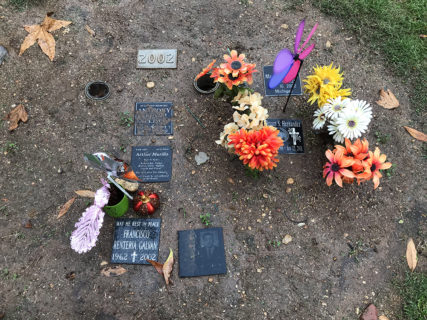 Plaques, flowers and other decorations adorn the burial ground for those unclaimed who died in 2002 at the Los Angeles County Crematorium Cemetery. For some, family came forward later to claim their loved ones and placed a plaque in remembrance. RNS photo by Alejandra Molina

As a chaplain for Los Angeles County-USC Medical Center, Jordan said some of the unclaimed may have been patients he accompanied.

"That same sense of coming alongside the bedside with no agenda, no pretense, no judgment, and just journey with that individual, I strive to carry that same spirit here," Jordan said.

Ponnet said he is grateful for the annual ceremony.

"I truly hope and pray that as the word continues to get out, that other cities, and counties, countries will emulate something similar to this, make it their own," Ponnet said.

Ponnet also works as a chaplain and said he's heard stories of economic hardship that have led to family disconnection. Divorce, addiction or a bad family event can also lead to these individuals being unclaimed.

"You have people from around the globe who come to LA for various family reasons, economic reasons," he said.

"I and the other chaplains visit people who are disconnected and we know they may end up here once they die," Ponnet added. "They have many gifts and talents. For whatever reason, they come. They get ill and they die in our county." Members of the Zen Center of Los Angeles lead a Buddhist chant at the interfaith ceremony in remembrance of the unclaimed dead on Dec. 4, 2019, at the Los Angeles County Crematorium Cemetery. RNS photo by Alejandra Molina

Related Posts
By Eboo Patel
From King to Gandhi, racial justice brings faiths together
By Shumaila Hemani
As a Sufi singer, I believe the sounds of world religions can cultivate compassion during COVID-19
By Carr Harkrader
12 Black faith leaders who shaped America
By William Kole
Interfaith group: No Buddhist or Hindu statues in nightclubs
By Alejandra Molina
California bishops say protesters ‘failed the test’ of history in toppling Junipero Serra statues