LAS VEGAS (RNS) — Fatima Motti spent years crisscrossing the country searching for meaning in her life: as a dancer, as a wrestler, as a Sun Dancer with the Lakota Nation.

She found what she was looking for inside the prayer hall at Masjid Ibrahim.

“This place saved my life,” the recent convert said after Friday prayers earlier this fall. “I was being attacked by shaytan (Satan), and then it stopped. I came here and I knew had to accept Islam.”

Motti discovered the mosque after finding herself stuck in Vegas with a broken leg. When a Facebook friend sent her some verses of the Quran to comfort her, she felt like she was “on fire” after reading them, she said. So she began calling up local mosques.

She knew she’d found the right place after taking one look at Masjid Ibrahim. Motti said she’d seen the mosque and the surrounding street in a dream.

“I come here every Friday,” she said, the rhinestones on her slip-on hijab glinting. “I come here because it’s the only place I find light.” 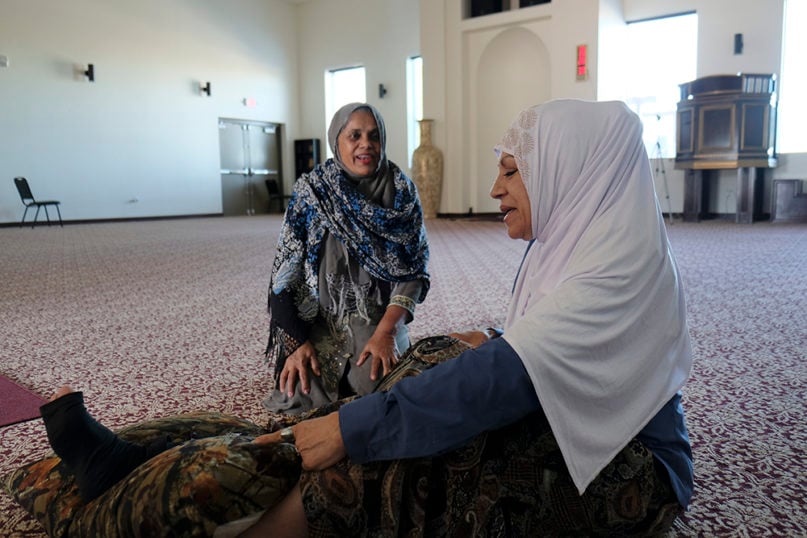 Stories like this bring a smile to the face of Sharaf Haseebullah, the 74-year-old Pakistani immigrant who founded Masjid Ibrahim four years ago. Haseebullah, who donated $3 million of her own to the project, appears to be the first woman to fund a mosque in North America entirely by herself.

“This is my last achievement of my life,” she said. “This is my mission accomplished. Now I hope that Allah gives me a good death.”

The Sunni mosque serves a diverse congregation of several hundred local families, offering a Sunday school for children, regular social gatherings, service projects, computers for kids to do homework, career services for locals, an open library stocked with Islamic literature, marriage counseling, Islamic studies classes and interfaith events in partnership with other Southern Nevada communities. Every weekend, members of the mosque prepare hundreds of sandwiches to deliver to another local mosque, Masjid As-Sabur, where congregants offer them to the homeless. The mosque has become “part and parcel” of the Vegas community, said Imam Shamsuddin Waheed, noting that non-Muslims in the area often come to the mosque seeking aid.

“Masjid Ibrahim offers a refuge,” said Waheed, who was leading a congregation in Toledo, Ohio, before Haseebullah hired him about a year ago. “Our modern life can be stressful and disheartening. This place, where people gather for no reason other than to worship God, can be nothing but a light in a world that’s increasingly difficult.”

Haseebullah and her husband arrived in the U.S. from Pakistan in 1975 and settled first in Chicago before moving to Las Vegas. She’s a pharmacist and graduated from the University of Karachi at the top of her class.

A mother of seven, Haseebullah owns a popular drugstore in the city, Raxo Drugs Inc. But her real financial gains have come from her penchant for profitable real estate investments.

Haseebullah owns dozens of properties across the country. The income from those properties pays for half of the mosque’s upkeep and monthly expenses; the other half is paid for by donors.

Five years after Haseebullah and her husband moved to Vegas in 1990, they purchased nearly an acre of land on North Jones Boulevard. Her husband, also a pharmacist, offered it to her to build another pharmacy.

Haseebullah surprised him by suggesting they instead convert the run-down home on the property into a place for Muslims to worship God.

“I told him, ‘We’re doing so much working, running around 24/7, but what are we doing for our akhirah?’” she recalled, using the Arabic term for the afterlife. “I said, ‘What are we doing for Allah? Nothing. We have the big house, the housekeeper, the nanny, we send our kids to the best private school. My kids are grown up. We don’t need any more money. Now I want to use this house to teach Quran.’”

In 1997, the small building, which they dubbed Masjid Haseebullah, opened as a mosque. Dozens of families began using the space to hold congregational daily prayer, and Haseebullah offered lessons in how to read the Quran to about 20 neighborhood children, the same way she had taught her own children and grandchildren. But after her husband died in 2005 of a brain aneurysm, forcing her to sell many of her properties in order to pay the medical bills, Haseebullah began thinking about turning the makeshift mosque into a new, full-blown Islamic community center.

“I was thinking, this one is old and just one bedroom,” she said. “It was so crowded. I just started visualizing what it would look like.”

By 2009, she began the process of obtaining the property’s necessary zoning permits. Construction on a new, 7,000-square-foot structure began in 2012, complete with a dome, minarets, a mihrab, classrooms for Sunday school and foot-washing stations for men and women.

This time, she called it Masjid Ibrahim.

“This mosque is not for my family,” she said. “This is for Allah.”

Haseebullah decided not to fundraise for the mosque’s construction, as is the norm among American mosques, and to instead self-fund the project. For one thing, she said, she had no idea how to go about raising money.

“It took me seven or eight years, because I don’t know how to do fundraising,” she said. “I just have me and my Quran. So I don’t know how it happened, but this mosque was built. When Allah helps you, you always win.” 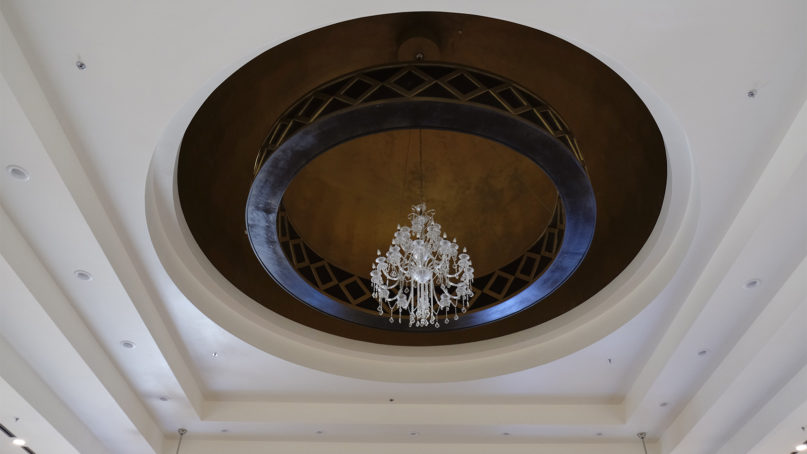 Some local Muslims had also been skeptical that she, an elderly widow who spoke with an accent, would be able to bring the mosque to fruition. And those few who were willing to donate wanted to have a say in the way the mosque would be built.

“Everyone was telling me it would be too hard and it’s not going to happen,” she said. “But I have trust in Allah. In everything, Allah helped me.”

When the mosque opened in 2016, Haseebullah made international headlines, with media seizing on the fact the mosque was likely one of a few in the world financed entirely by a Muslim woman.

“She’s a very humble person, though,” he added. “She doesn’t walk around putting on any airs of authority or anything, but she’s recognized as an elder whose advice and help is sought out often.” 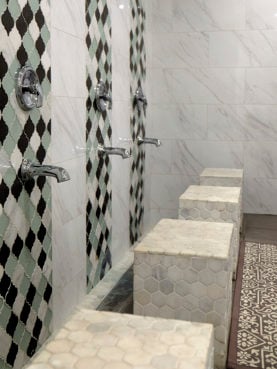 On Fridays, close to 300 people attend the mosque’s jumah prayer service. On the holidays of Eid, they serve around 600 Muslims. The mosque offers a large main prayer space where men and women can both pray in congregation without a barrier dividing the genders. Still, most women choose to pray in an adjoining room where they can see the imam through a large television screen.

Haseebullah proudly showed off the the tiling along the foot baths she installed for worshippers to perform their ablutions, the calligraphy and art she commissioned outside the mosque’s doors, and even the color-changing lights on the interior of the mosque’s dome — “it’s the Vegas thing,” she said with a smile.

When a Christian couple from the neighborhood stopped by to check out the mosque, explaining that they had grown curious after driving past the structure every day, she encouraged them to come inside, then brought them along for the tour, too.

“Everyone is welcome,” she said, propping open the front door and encouraging the couple to follow her within. “We’re neighbors. Masjid Ibrahim is for the whole community.”