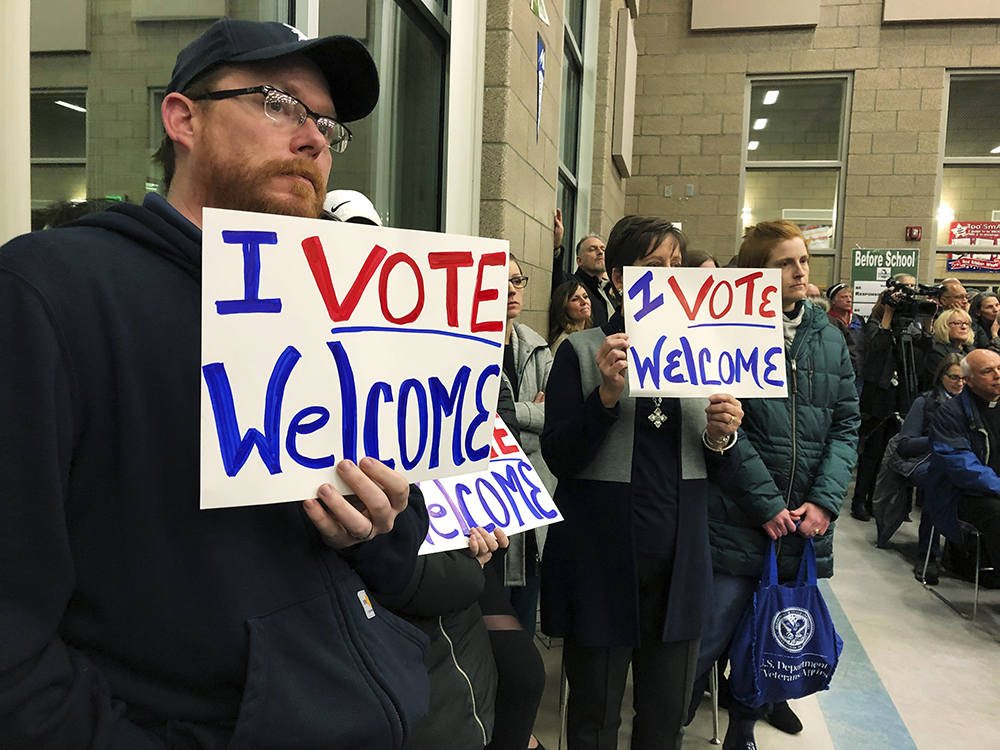 Residents in support of continued refugee resettlement hold signs at a meeting in Bismarck, North Dakota, on Dec. 9, 2019. President Donald Trump's executive order that states and counties should have the power to accept or refuse refugees is being challenged in court. (AP Photo/James MacPherson)
December 10, 2019
James MacPherson

BISMARCK, N.D. (AP) — A North Dakota county on Monday (Dec. 9) voted to accept no more than 25 refugees next year, after initially signaling it would be the first to ban them since President Donald Trump ordered that states and counties should have the power to do so.

The 3-2 vote by the Burleigh County Commission, which included a provision for further study of the issue, followed a four-hour meeting and came a week after a vote was postponed when the audience overflowed the county's usual meeting space. If commissioners had voted no, refugee resettlement groups say they believe Burleigh — home to about 95,000 people and the capital city of Bismarck — would have been the first local government to do so since Trump's executive order in September.

Burleigh County doesn't receive many refugees — just 24 in fiscal 2019, after 22 the year before — but interest in the vote has been intense. Monday's meeting was shifted to Horizon Middle School cafeteria, where a standing-room-only crowd of more than 450 people showed up testifying for and against refugee resettlement. Inside the building, a significant presence of police and county deputies was apparent. 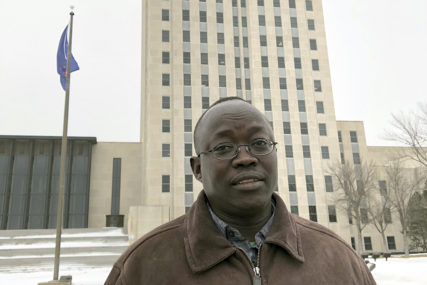 Reuben Panchol is shown Dec. 6, 2019, at the state Capitol in Bismarck, North Dakota. Panchol, who emigrated from Sudan to North Dakota as a child, said he hoped to tell his personal story at a meeting Dec. 9 at which the Burleigh County Commission was to consider voting against accepting any new refugees. It's believed the county would have been the first to do so since President Donald Trump's executive order earlier this fall gave states and counties the ability to do so. (AP Photo/James MacPherson)

"Look at the room and tell every immigrant here that they are not welcomed," said Geraldine Ambe, who moved to Bismarck from Cameroon and is now a U.S. citizen. She said her aunt and her husband and their four children "ran from Nigeria to seek protection."

"Please look at her face and tell her 'we can't help you,'" Ambe said.

"People think we are lazy and just sit at home and get the government money," said 20-year-old Tresor Mugwaneza, who came from Congo four years ago. "We are not in this country just to take your government money. We are here to work and be successful in life just like all of you."

Mugwaneza said he was attending college and has "dreams of having my own business one day."

Chairman Brian Bitner said at least a dozen church leaders wrote in support of the resettlement program, part of an outpouring of public comment that Bitner last week said was running decisively against any new refugees. Bitner voted against accepting new refugees.

"Refugee resettlement is not only the right thing to do, but it is good for Burleigh County and North Dakota," Bishop David Kagan, of the Roman Catholic Diocese of Bismarck, wrote in a letter to commissioners. The diocese, which covers the western portion of the state, serves some 62,000 Catholics.

"In my own mind, we would basically be writing a blank check, and somebody in Washington, D.C., or elsewhere would make a decision on how many people would come to Burleigh County and we'd have to respond," Bitner said. "And that's simply not a good way to govern." Burleigh County Commission Chairman Brian Bitner poses for a photo as he prepares for a meeting in Bismarck, North Dakota, on  Dec. 9, 2019. Several church leaders urged Burleigh County not to be the nation's first to refuse new refugees since President Donald Trump ordered that states and counties should have the power to do so. (AP Photo/James MacPherson)

Bitner and others, including Republican state Rep. Rick Becker and Bismarck Mayor Steve Bakken, cited lack of control and the potential new costs of supporting refugees. The county doesn't track such costs.

Becker told the commission the issue is not about race, religion or fear.

"This is not anti-refugee," Becker said. "This is about policy."

Bismarck resident Clay Jenkinson, a North Dakota historian, said in 1920, 70% of the people in the state "had been born abroad."

He called banning refugees from the county "wrongheaded."

"This vote is being watched by the whole world," he said. "It will tell us who we are."

Patricia Hager of Bismarck said a man she called "M" who was a refugee cared for her 98-year-old father, who was in a nursing home.

"Had there been a blanket refusal of refugees in place when 'M' came to our community, my father and our family would have missed out on his love, gentle care, and skills he brought to us," Hager said.

"There is room at the inn for people who need a helping hand from us," she said.

Republican Gov. Doug Burgum said last month that North Dakota would continue accepting refugees where local jurisdictions agreed, and his spokesman said the governor saw it as a local decision.

Soon after, Cass and Grand Forks counties, which are home to the state's largest city, Fargo, and third-largest city, Grand Forks, respectively, declared they would continue taking refugees. Fargo Mayor Tim Mahoney said refugees were needed to boost the city's economy and that 90% were fully employed within three months of resettling in his city.

Shirley Dykshoorn, a vice president for Lutheran Social Services, which handles all of North Dakota's refugee resettlement cases, said her agency used to handle about 400 cases per year, but that number dropped to 124 in fiscal 2019, which ended in September.

The program has been in existence in North Dakota since 1948.

The Lutheran Immigration and Refugee Service, which works with Lutheran Social Services, is one of three national organizations suing to block Trump's executive order. President and chief executive Krish O'Mara Vignarajah said her organization is aware of no other local government that has voted to reject refugees.