(RNS) — This weekend my husband and I were visiting my hometown in western Illinois and decided to attend a Sunday service at the Presbyterian church where we got married many years ago. We looked up the worship times on the church’s website — 9 a.m. and 11 a.m., just like back when I was a member there in high school — and decided to catch the 11 o’clock service.

The first change I noticed was the easy availability of parking, even though we pulled in a few minutes late. In the old days, not arriving early meant that there would often be no parking at all, especially because three “big steeple” downtown churches all shared a parking lot: the Presbyterians, the Methodists and the Lutherans.

Parking was not remotely a problem in 2019. What was a problem was the sign out front announcing that the church had one consolidated service at 10:30 a.m., despite what the website had promised. It looked like the sign had been there for some time.

There is a canary-in-the-coal mine element to a church that can’t be bothered to update its website with something so basic as its times of worship. What it communicates is that, while visitors are welcome, no one expects any to show up.

We wound up catching part of the Methodist service next door, and it, too, was very different from what I remembered in the 1980s. I think that every member of the small choir had gray or silver hair. There was a smattering of teens in the congregation, but nothing like the thriving youth group I remembered some friends being part of. There was a friendly and kind spirit in the service, which filled the room — that feeling of beloved friends who have known one another for years and loved each other through many trials. Several people introduced themselves and inquired about us, but they did not seem surprised when they heard we were just passing through.

The problems of aging congregations and diminishing numbers are so well-documented in mainline Protestantism that they hardly need repeating here, yet it’s rare for me to have so personal and piercing an experience of it.

What I saw in western Illinois is a microcosm of what’s happening all across the country, especially with young adults. If a picture is worth a thousand words, here is a graphic from sociologist of religion Ryan Burge, a Religion News Service contributor, who has analyzed several decades of General Social Survey data to demonstrate what has happened over time with Americans in their 20s. 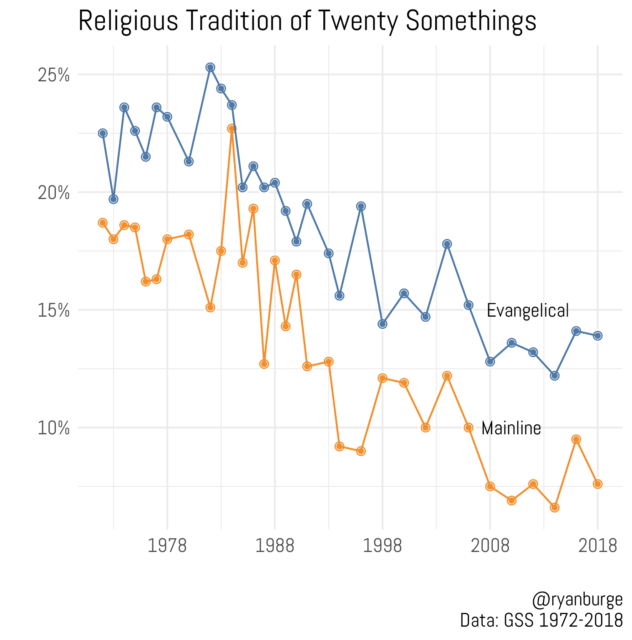 As you can see, both mainline (orange) and evangelical (blue) Christian traditions are experiencing decline, though the evangelical pattern is not yet as devastating. The two traditions have tracked together in surprising tandem in the last two decades, despite evangelicalism’s higher baseline.

That means that about 1 in 5 of these young adults were Protestants at all in 2018, compared with twice that when I was in high school. The long-term trajectory is trending downward, even though there have been some uneven “rebound” years, as in 2017.

Sometimes, because of my research into young adult Mormons, I meet people who are clinging to the belief that many young adults tend to leave religion in their teens and early 20s, only to return to the fold after they’ve sown some wild oats and established their adult identities independently of their parents. Once they get married and have children of their own, the thinking goes, they will come back to church.

There are definitely kernels of truth to this; the “life cycle effect” is a real phenomenon that we have data about stretching back for decades. Late adolescence and the early 20s are the most vulnerable time for people to leave religion.

The differences now are that 1) more young people than ever before are leaving during that vulnerable period and 2) many of them are not coming back at all, even if they buck the demographic trends by getting married and having children while they’re still in their 20s. (More are delaying marriage or not marrying at all; according to the U.S. Census Bureau, the median age for marriage in 2018 was nearly 30 for men and 28 for women.)

It’s a different religious landscape now, and some churches are scrambling to keep up. When my husband and I were looking up worship times in western Illinois, we came across a storefront congregation that is calling itself “Fields Church” and boasting that it’s a church for people who really don’t like church. The website has photos of young adults out enjoying themselves in nature, not doing anything that smacks of traditional worship. There are no seniors visible anywhere on the front page.

The website came across to us as slick — it was recognizable marketing by people who would probably swear up and down that they don’t do anything so cynical as marketing. You can see the thinking behind it: Millennials love nature, we know from numerous studies, so let’s show them out in nature. Millennials don’t like church, so let’s position ourselves as the renegade, hip counterchurch.

But hey, at least they’re trying. If this weekend is any indication, the mainline church of my adolescence and early adulthood has basically abandoned all hope. 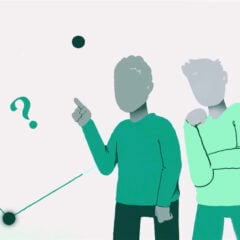 Ahead of the Trend
Millennials adopt digital worship, but not at the expense of IRL faith
Follow us on Facebook!
Submit your photos to RNS