RIVERSIDE, Calif. (RNS) — A few of the pilgrims walked barefoot up the mountain.

Some danced to the sounds of a tamborazo ensemble pounding the drums and playing the trumpet behind them.

Others carried a large statue of Our Lady of Guadalupe.

Several hundred people celebrated the Virgin Mary this week by taking part in a 2.5-mile pilgrimage on Saturday (Dec. 7) that ended with a hike up Mount Rubidoux, a mountain in the city of Riverside in Southern California’s Inland Empire.

The annual “El Camino de San Juan Diego” started about two decades ago and takes place on the weekend before the Feast Day of Our Lady of Guadalupe, which falls on Dec. 12. 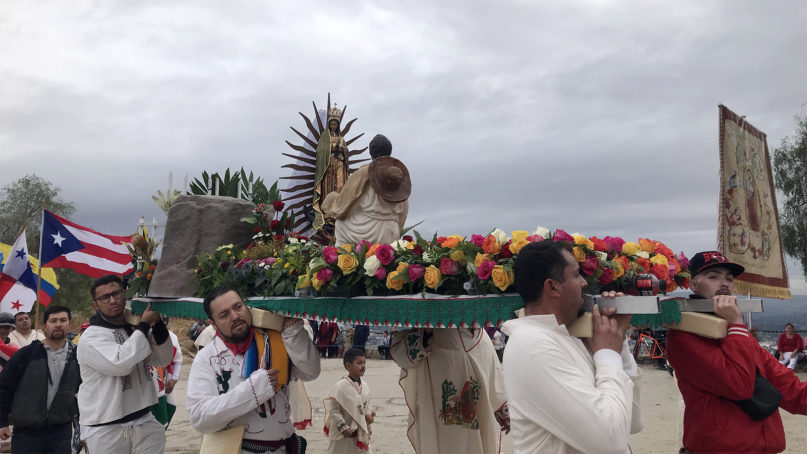 Men carry a statue of the Virgin Mary and Juan Diego in an annual procession ahead of the Feast Day of Our Lady of Guadalupe in Riverside, California, on Dec. 7, 2019. RNS photo by Alejandra Molina

“This is beautiful,” said Esperanza Flores, 55, who has been participating in the pilgrimage for about 10 years. “I have no words. My heart feels happy. There’s harmony.”

Flores said she took part in the pilgrimage because of her faith “in our mother,” who she said has blessed her and her family with good health.

The feast of Our Lady of Guadalupe — according to Catholic teaching — marks the appearance of Mary to St. Juan Diego, an indigenous man, on a hill of Tepeyac in Mexico in 1531. The brown-skinned Virgin, patron saint of Mexico, is honored during this time with Masses and other celebrations outside the church across the region.

In the Orange County city of Santa Ana, resident Luis Cantabrana converts his house into a giant Virgen de Guadalupe shrine and invites the public to pray and celebrate in the days leading up to the feast day. The house is embellished with flowers and Christmas lights resembling the Mexican flag. A large statue of la Guadalupana stands atop a set of doorsteps as if she’s rising among the heavens.

The Cathedral of Our Lady of the Angels in Los Angeles hosts its celebrations on the evening before the feast day with the veneration of the Relic of the Tilma.

“The faithful believe, that the image of the Tilma, or cloak, of a poor Indian named Juan Diego, was miraculously created by the Virgin Mary in 1531,” according to the cathedral. The relic — believed to be the only one in the United States — was given to then-Archbishop John Cantwell of Los Angeles by the former archbishop of Mexico City, Luis Maria Martinez, in 1941. 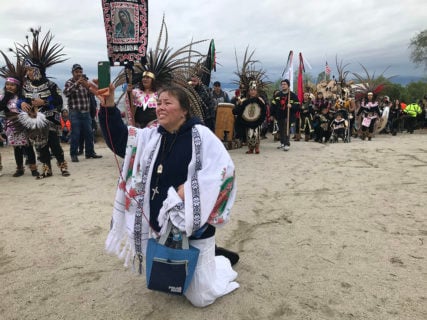 A woman takes a photo of a Virgin Mary statue after kneeling in prayer at the top of Mount Rubidoux during a pilgrimage honoring Our Lady of Guadalupe, in Riverside, California, on Dec. 7, 2019. RNS photo by Alejandra Molina 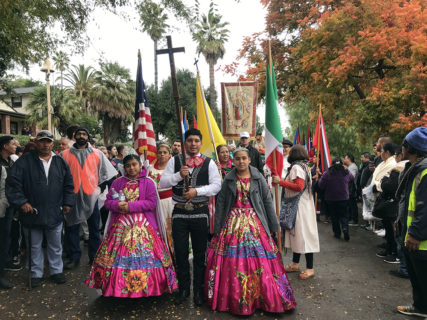 People participate in “El Camino de San Juan Diego” ahead of the Feast Day of Our Lady of Guadalupe in Riverside, California, on Dec. 7, 2019. RNS photo by Alejandra Molina

In Riverside, the procession, which began at Our Lady of Guadalupe Shrine, culminated with Mass atop Mount Rubidoux. A series of Masses at the church were scheduled to follow.

Daisy Vargas, a professor at the University of Arizona who specializes in Catholicism in the Americas, said the Virgin evokes “strong feelings of love and care that unites the community together.”

To Vargas, it’s exciting to see how this devotion is displayed outside houses of worship. Too often, Christianity and the Catholic faith are measured in church attendance, she said, and not acts of devotion like the Our Lady of Guadalupe feast.

“We see another way that people experience religion,” Vargas said.

While studies show that Latinos in the U.S. become less Catholic, the Virgin Mary still remains a cultural icon.

“Sometimes these devotional practices begin in churches, but they’re also tied to things that are passed down generationally,” Vargas said. “For some Catholic folks who are not regular church attendants, many of them will show up for devotion to la Virgen de Guadalupe.”

La Virgen de Guadalupe takes on many forms. She is someone who champions the innocent and heals the sick. To others, she’s a symbol for immigrants and of the fight against community injustices.

Her name was invoked during the movement for Mexican independence, and images of the Virgin were also emblazoned in banners against the Spanish occupation, Vargas said. In recent years, she’s been used as a symbol against housing displacement and to protest gentrification.

For Patty Delgado, the founder of Hija de tu Madre, “Our Virgencita Jacket represents everything I am.”

“Our Virgencita Jacket represents everything I am. For me, there’s nothing more Mexican than La Virgen de Guadalupe and nothing more American than denim” – @partyskinny

Vargas said the Virgen de Guadalupe is accessible to everyone.

After all these years, she maintains her prevalent status for a number of reasons.

She’s rooted in the Catholic faith and upheld institutionally by the church, but her story of appearing to an indigenous man carries significant meaning, Vargas said.

“Who would be more appealing than somebody who presents herself on the terms of the people … as accessible and as one of the people?” Vargas said. 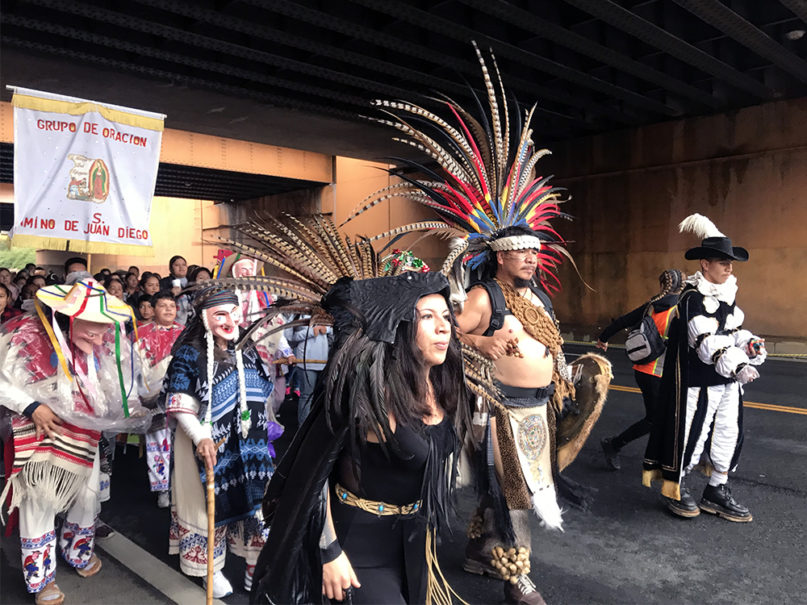