(RNS) — Two weeks ago, I wrote a column, not coincidentally, about feeling uneasy after paying my tithing: December is the season of individual tithing settlements for members of the Church of Jesus Christ of Latter-day Saints, and what I find unsettling is that the church, unlike many other religious denominations and charities, never explains what it is doing with my donations. I would very much like to know — not just for my own benefit, but because accountability is as important for institutions as it is for individuals.

Yet the church has not released a substantive financial statement in 60 years. “I think the church stopped making disclosures in 1959 because it was on the brink of financial disaster,” I wrote in my earlier column, “as its final report indicates, it outspent its income by $8 million that year.”

I voiced my suspicion that poverty is no longer behind the church’s silence, alleging that “it has grown wealthy enough that exposing the extent of its holdings could cause embarrassment and prompt unwanted questions.”

Yesterday, a “whistleblower” who used to help manage the church’s investment portfolio released a series of documents alleging that the church has mismanaged more than $100 billion of charitable donations, including by channeling a portion of that money into for-profit investments on which it has failed to pay taxes — The Washington Post and Religion Unplugged have more details.

Another person, apparently the whistleblower’s brother, seems to have written the report that is publicly available for download here.

That report alleges that the church receives an excess of $1 billion a year that it doesn’t need for its own operating expenses and that since the 1990s that money has been funneled into a church-owned investment company called Ensign Peak Advisors, which operates as a nonprofit arm of the church. Ensign Peak Advisors, the report claims, has not used its money as a nonprofit should.

The report further claims that Ensign Peak Advisors has made only two disbursements in its history, and neither was for a charitable purpose; one was to prop up a failing insurance company owned by the church, and the other was to support the City Creek Mall in downtown Salt Lake City.

Here is a screenshot from the report’s list of grievances: 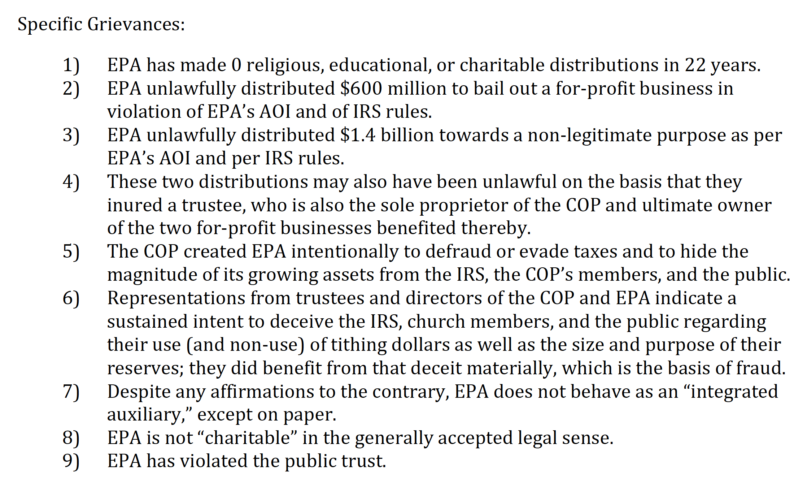 A list of grievances in a complaint from a former LDS church employee to the IRS.

I’ve gone through the 74-page report, including the attached documentation. I’m actually grateful that these charges have come to light, as I’ll address at the end, but to my mind this opening salvo seems far from a slam-dunk.

The main problem is that the author of the report has a clear agenda, which damages the report’s overall credibility. For example, even if it seems a stretch for church officials to claim the funds are being held in reserve for the Second Coming of Christ, it’s not helpful (or financially relevant) to compare the church’s belief in that event to Scientology’s teaching about the intergalactic alien Xenu. This seems to have been done solely for the purpose of ridiculing both religions.

Neither is it helpful to weaponize rhetorical questions to over-prove a point:

But you should know how much you gave their (Ensign Peak Advisors) slush fund since the COP (Corporation of the President of the Church of Jesus Christ of Latter-day Saints) created it in September 1997: at least $18.4 billion. What did they do with this tax break? “Nada,” said a whistleblower. What have they done with the rest of Mormon, Inc.’s leftovers since 1997? Zilch. And how big are those leftovers now? $124 billion.

It’s entirely possible that these numbers are correct; I have no way of knowing, which is the main problem with a church that refuses to disclose its finances. But convincing readers that the numbers are correct would have been better accomplished by simply presenting the facts without such relentlessly strident commentary.

Sometimes the report wants to have things both ways. On the one hand, it accuses church employees of lying openly about finances, and on the other, claims that very few people — only the most senior apostles — ever know the full extent of the institution’s holdings. The whistleblower says the church didn’t want any one person to have so much information that he or she would prove to be a liability, but in almost the same breath accuses Gerald Caussé, who is a high-ranking leader but not an apostle, of being “shifty” and “a master of carefully worded statements” that obscure the truth.

Isn’t it possible that church employees who have made public statements about the limitations of the church’s finances  — Caussé included — made those declarations in good faith because they didn’t have the whole picture?

For that matter, isn’t it also possible that these documents that appear to show no charitable distributions from Ensign Peak do not represent all of the EPA’s outflow? I think it’s important that we keep an open mind here, and assume that there is another side to the story … if the church is willing to come clean with actual documents.

That’s a big if, given that the church’s standard response to journalists’ estimates of its financial holdings is to trot out the phrase “grossly exaggerated.” If this report and its accompanying internal documents are to be believed, those journalists were actually underestimating the church’s finances. If the church is going to defend itself, simply releasing another “grossly exaggerated” dismissal is not going to cut it.

In other words, show us the money.

What’s weirdly karmic about this whole debacle is that it could have been avoided if the church had simply continued to exercise transparency about its income and expenditures, as it did in the early and mid-20th century. Instead, its commitment to secrecy, presumably to avoid criticism, has opened the door to further criticism.

The optimal way for the church to deal with this is to fight fire with fire, releasing all of its own internal financial documents. Other than the shocking size of its portfolio, it’s possible that those revelations will turn out to be a yawnfest.

It’s easy for me to believe that the church is guilty of hoarding its wealth; despite its privileged status, it still actively perceives itself as a victim of religious persecution and learned early on to trust only its own. As well, it’s facing a future in which its “First World” growth has flatlined or even (in the case of Europe) entered into negative territory, while new converts are still joining in, for example, West Africa.

Perhaps its utterly excessive stockpile has less to do with the theological possibility of Jesus’ return than it does with the prosaic current reality that the church is only growing in areas of the global south where its members cannot self-sustain their buildings and programs.

It’s harder for me to believe that a church that is as a rule so overly meticulous has been intentionally defrauding its members and the federal government. It’s possible, of course, but … really? Even these internal documents show an institution that has stuck with a conservative 60/40 investment portfolio, so it’s not a question of the LDS church engaging in wild speculation with money contributed by the faithful.

Neither does it seem to be a question of top leaders becoming personally rich from the church’s wealth; what greed and hoarding propensities leaders have demonstrated seem to have enriched the church as an institution, not lined their own pockets. So the report’s references to the Mormon “gigachurch” in conjunction with megachurches’ personal jets and private islands seem unwarranted.

Still, the ball is in the church’s court now. It must not only demonstrate to the IRS that it has been in compliance with the law, but reassure believers that it has adhered to the fourfold mission outlined in one of its training slides for new employees — which includes “caring for the poor and needy.”