PARIS (RNS) — The story of Akiva Weingarten, a Hasidic man from New York who was ordained an ultra-Orthodox rabbi in Israel and started over again as a Reform rabbi in Germany, sounds like a made-for-TV movie saga.

Weingarten’s unlikely but true biography covers all of the above, including the television angle. He advised the popular Israeli television series “Shtisel” —  available on Netflix in the United States — on how to depict his former ultra-Orthodox life. He even has a bit part in it.

For the past five years, Weingarten has been in Germany, first studying in Potsdam to become a Reform rabbi and now leading a synagogue in Dresden and a liberal community in the Swiss city of Basel.

It’s a long way from New York’s Rockland County, about an hour north of Manhattan, where he grew up the oldest of 11 children in a Satmar community. His journey took him next to Israel, where he was ordained a rabbi, married and became a father to three children. He had to leave them behind because his ex-wife would not quit the ultra-Orthodox community.

He has not left his former life of faith entirely behind. “Many people who leave the community leave with much anger. But I’m not angry,” Weingarten, who will turn 35 on Monday (Dec. 23), told Religion News Service. “I’ve made peace with what they are and who they are. Everybody gets to live their life.

“There are many good things within the ultra-Orthodox world,” he added. “I try to introduce them to traditional Hasidic songs, customs and foods. The reaction has been very, very positive.”

Weingarten’s life initially followed a well-worn path for an ultra-Orthodox Jewish male —  yeshivas in Monsey, New York, and Williamsburg in Brooklyn, the move to Israel at 18, an early marriage and children and rabbinical ordination in Bnei Brak, a center of Israel’s Haredi Judaism. 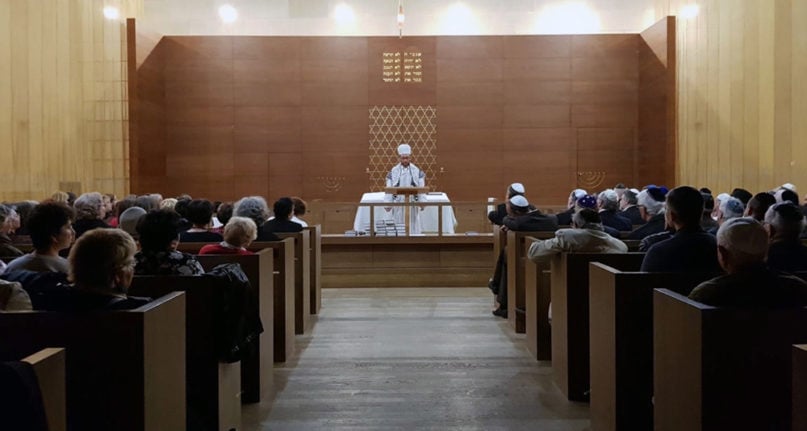 From an early age, though, Weingarten found ultra-Orthodoxy limiting and angered teachers by asking too many questions. Years later, he decided to go “off the derech” (path, in Hebrew) and leave his Hasidic community for life in the wider world.

He took a flight to Berlin in 2014 and discovered the reviving Jewish life in the homeland of the Holocaust.

It might seem strange for a Jew whose grandparents survived Auschwitz and whose father never bought German products to choose Germany for a career reboot. Weingarten simply said that “it’s a bit different” for his generation.

“I went to Germany because they had free college there,” he said matter-of-factly. “I just wanted to study something, I didn’t know what.” In the university in Potsdam, southwest of Berlin, he found a program with language courses to integrate migrants.

With Yiddish as his mother tongue, he had a good ear for German, from which Yiddish evolved centuries ago. Speaking the language of his adopted country was a different story.

“The grammar is so different between Yiddish and German that it took over a year just learning German,” said Weingarten, who now speaks the language with ease.

At school he gravitated toward the university’s Abraham Geiger Kolleg, the first new rabbinical school to open in Europe after the Holocaust.

Dresden, an eastern German city known for its active far-right political scene, was not an obvious choice. But the starkly modern New Synagogue, built on the site of the Semper Synagogue destroyed in the 1938 pogrom known as Kristallnacht, was looking for a rabbi.

“Dresden is said to be one of the worst Nazi cities in Germany. I actually haven’t had any bad experiences here,” said Weingarten, who is not afraid to wear his kippa in public. “I actually hear it’s worse in France.”

Most of the more than 700 members of New Synagogue are Jews from Russia. The synagogue’s prayer books and its weekly bulletin are printed in both German and Russian. While he now prefers a more liberal Judaism, Weingarten does not want to give up some aspects of Hasidic life. He has kept contact with his children in Israel and his mother in New York, who, unlike many ultra-Orthodox parents, did not shun him when he left. But the gulf with his ex-wife seems too wide to bridge.

“There are many good things within the ultra-Orthodox world,” he explained. “One of the main things is their approach to helping others. I think it’s lovely to have ‘gemachim’ (charities) for every purpose — if people are sick, if people need a loan to marry off their children, if people need more chairs and tables if they have guests for Shabbat.”

He has been introducing some aspects of this life to his two congregations. “Dresden is more a conservative synagogue, but I’m also a rabbi in Basel where the community is a more liberal American Reform-type synagogue,” he said. “Even they enjoy very much the customs and traditions I bring with me.”

“My general approach to Judaism is that everything that is in Judaism belongs to us, the people,” he explained. “We will determine which parts we want to keep and which parts we don’t.”

Weingarten, often seen in a three-piece suit, even dresses up occasionally in full Hasidic garb topped off with a shtreimel, the distinctive round fur hats Hasidic men wear.

“People say, why do you wear a shtreimel on Shabbat; that belongs to the ultra-Orthodox Hasidic people,” he said. “I say no, shtreimel and anything else that comes with Judaism belongs to all of us.”

In Israel, Weingarten had friends in the film industry, which is how he came to advise the secular actors who play in the “Shtisel” television series, including Michael Aloni, who plays the rabbi’s son, also named Akiva.

“Before we started shooting, we had months of preparation,” Aloni told the New York Jewish Week. “We had to learn Yiddish. We had a rabbi teach us the prayers and the rules.”

“First they would have to know how to pronounce the Yiddish words correctly,” Weingarten recalled. “That was a big challenge. Many times there were small things that only an insider would notice.”

One actress left her blouse open at the top, a no-no for ultra-Orthodox women. Books had to be checked to make sure no secular book was stacked on top of a religious book.

Weingarten had a bit part in one episode of “Shtisel” and did some audio for the American version in a studio. But there were enough other OTDs — “off the derech” people who had left ultra-Orthodoxy — in New York that that work has since dried up.