(RNS) — Given President Donald Trump’s rock-solid support from the evangelical Christian community, the appearance late last week (Dec. 19) of an editorial titled “Trump Should Be Removed From Office” took many by surprise — even, to judge from his Twitter feed, Trump himself. No doubt he, like many pundits, spent last weekend wondering if the editorial portends cracks in his base.

While I remain unconvinced of that, it is nevertheless encouraging that Christianity Today, the magazine founded by Billy Graham and a bastion of white evangelical thought for a half-century, has named what is so obviously true about Trump. But apart from the politics, an important question has yet to be reckoned with. Why this editorial, and why now? Is there something deeper, perhaps even unspeakable, going on?

To this last question, I answer yes. The CT editorial points not just to a crisis within the evangelical version of American religion; it points to an unspeakable melancholy that marks American whiteness itself.

The editorial represents an effort to rescue evangelical religion and, more deeply still, to rescue the American project from Trump’s endangering of that project, which has come to be seen as endangering the very respectability and supposed civility of whiteness itself.

This comes through most forcefully when CT’s editor-in-chief, Mark Galli, concludes the editorial by telling his fellow evangelicals that Trump’s impeachment has brought both evangelicalism and the country to an inflection point. Using the imagery of a poker game, he writes: “And just when we think it’s time to push all of our chips to the center of the table, that’s when the whole game comes crashing down. It will crash down on the reputation of evangelical religion and on the world’s understanding of the gospel. And it will come crashing down on a nation of men and women whose welfare is also our own.”

It is this anxiety about evangelicalism’s future, woven together with an anxiety over the American project, that the purely political commentary has left unaddressed. Let’s call this anxiety “the melancholy of whiteness,” or whiteness losing itself and violently trying to save itself, or the effort to “make America great again.” This must all be understood within the long history of an unspeakable whiteness: whiteness as American religion and American religion as American culture. We are in a crisis of the religion of whiteness. 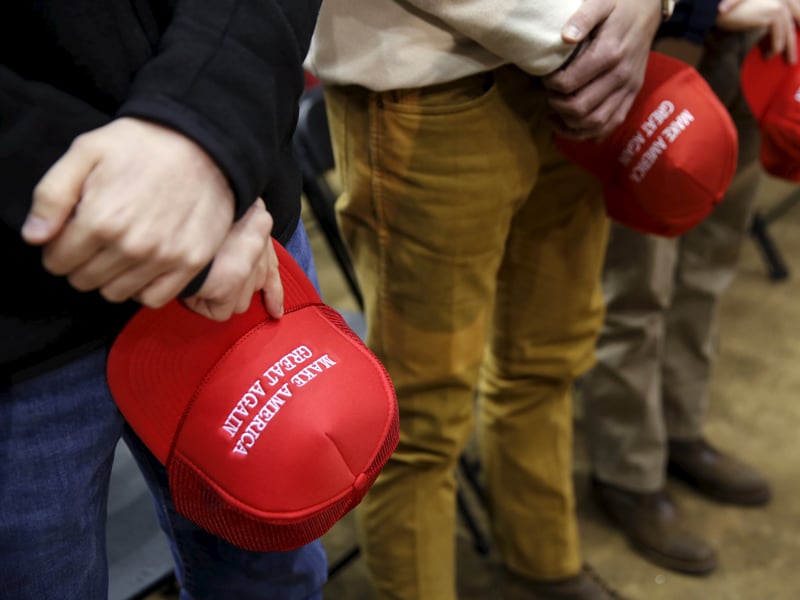 Supporters of Donald Trump stand during a prayer before a rally with Trump at Clemson University’s livestock arena in Pendleton, South Carolina, on Feb. 10, 2016. Photo by Jonathan Ernst/Reuters

In speaking of whiteness as religion, I am pointing to whiteness’s emergence in the 17th century, leading to the founding of the nation. It is then that whiteness emerged as a political and cultural practice, an imaginary glue meant to bind together the settlers who came to the New World and who needed a new solidarity.

As historians Nell Irvin Painter, Gerald Horne and Jess Row have shown, whiteness names a “solidarity of power” between those who settled — or, less euphemistically, took — land from supposedly inferior native “races,” land then worked by forced African labor. This is the original moment of gentrification — both of the imagination and of space itself.

But this new solidarity also involved a process of religion-ing, where “religion” in its deepest sense means just this: “to bind together.” Fusing Christian, colonial and state power, the settlers became a “We the People.” But this whitened “We” emerged through imposing geographical and mental borders that violently exclude even as they violently consume and incorporate everything in their path.

This is the unspeakable violence that is buried inside of the phrase by John Winthrop, governor of the Massachusetts Bay Colony, in a sermon in 1630: “a city on a hill.” The city shines only by virtue of what it claims to be above and is settled upon — the nonwhite.

Too terrifying to address head-on, the violence buried in Winthrop’s phrase and that drives the American consciousness is precisely what the national mythology — America as beacon of freedom, righteousness and the rule of law — disavows, which is why the violence constantly returns. Indeed, it constantly returns because it never went away. This avowal of freedom and disavowal of violence that is at the heart of America is the melancholy of whiteness.

This is the problem that the CT editorial hesitates in the face of and ultimately leaves in place. Indeed, what the editorial refuses to address is this: Whether in its left liberal or right conserving expression, American whiteness works by way of a certain claim to respectability and civilization while attempting to hide its founding and ongoing violence.

Trump renders naked the ongoing solidarity of settler power, the incorporating yet exclusionary “We” that has always been at the heart of the nation. The exposure of that nakedness has now incited more white melancholy and, at least for some white folks, has caused a certain embarrassment.

There’s no clear answer to this, but one thing is certain: If there is to be a different future for religion it will not emerge within the terms given by American whiteness or the practice of the political as we know it.

My hunch is that it will be a reimagining of America along the lines of what James Baldwin envisaged in “Another Country,” or perhaps of the sort that the sorely missed Toni Morrison envisaged in “Beloved” or in her last work, “The Source of Self-Regard.”

What’s needed is another (re)source. Those (re)sources are undercommon and are already among us, but whiteness, which has always violently drawn on those (re)sources, chooses melancholy over mourning, refusing to feel, hear and see them. Refusing, in short, another world.

(J. Kameron Carter is professor of religious studies at Indiana University, Bloomington. His book “The Religion of Whiteness” is near completion. The views expressed in this commentary do not necessarily reflect those of Religion News Service.)