WASHINGTON (RNS) — When a student stood to read from the Bible during a Catholic service at Gallaudet University earlier this year, she conveyed the sacred words in a language the group would understand: American Sign Language. The psalm — often chanted or sung — was signed as well.

And when the priest addressed the worshippers, he signed: “The Lord be with you.”

A flurry of hands signed back: “And with your spirit.”

For many, vocalized hymns, homilies, and prayers make up much of the experience of a typical religious service. Yet worshipping silently — in ASL — is standard fare at Gallaudet, the world’s premier college for the deaf and hard of hearing. And religious students say the language shift is but a small window into the subtle ways their communities intertwine deaf culture with the divine to produce uncommon expressions of faith and activism.

Christina DiSalvo, a hearing Catholic who serves as a lay chaplain to Gallaudet’s Catholic community and often works as an interpreter during services, explained that her team uses a lectionary that adapts phrases such as “hear the gospel” to be signed “pay attention,” or “hear our prayer” to “accept our prayer.” Other changes would be striking to anyone used to a Mass where the hearing are in the majority. DiSalvo said that unlike services at hearing parishes, where the priest may remain up front during scripture readings, the priest at Gallaudet sits down with the community to avoid being a visual distraction.

“Having information is the most important thing,” said DiSalvo, who works for the Archdiocese of Washington’s Department of Special Needs Ministries. “If the pastor is up at the front, they can’t see what’s going on.”

Equal access to information is not just a practical matter; it’s also a fundamental value in deaf culture. For faith groups at Gallaudet, it doubles as a religious principle.

“That comes from oppression,” DiSalvo said. She offered an example: “If something goes on in church, (a deaf person) asks, ‘Oh, what did they say? What are we praying for?’ Then someone responds, ‘Oh, I’ll tell you later. It doesn’t matter.’” 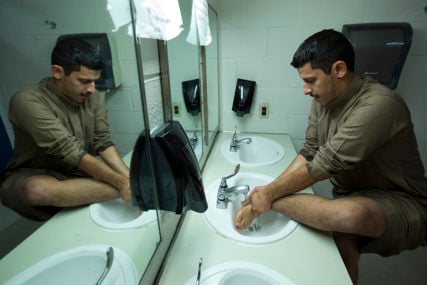 Lack of information in worship was a childhood struggle for Abdulrahman Alshehri, a student who belongs to Gallaudet’s sizable Muslim population — around 20 of whom, like Alshehri, hail from Saudi Arabia. Until he came to the U.S., he didn’t realize how much he had been missing at Friday prayer services.

“I came to America, and there was this person who said, ‘Do you understand anything about what they’re saying (during worship)?’ And I answered honestly that I didn’t,” Alshehri said through an interpreter.

Back home in Saudi Arabia, Alshehri now attends services where a live video feed shows an interpreter signing the imam’s words in Arabic Sign Language. But at Gallaudet, the ritual Islamic daily prayers often make an interpreter unnecessary: He simply mouths the words silently to himself.

“There’s no need to hear what’s said,” he explained, adding that he long ago memorized sections of Friday prayer services as well. “I know that passage of the prayers by heart.” 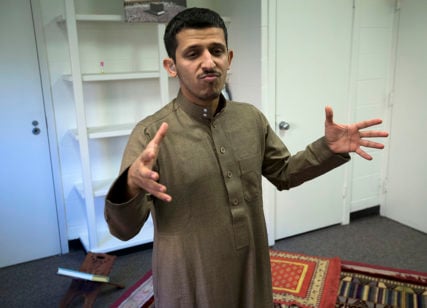 When asked how communicating in ASL alters his experience with scripture, Gideon Firl instructed an interpreter who had been vocalizing Firl’s signs to stop. Then Firl, a Christian who is deaf, began to sign theatrically, adding dramatic flourishes and gestures to his words.

His exact phrasing was unclear to those unschooled in ASL, but his meaning was easy to parse: In the midst of darkness, a tiny ball of light burned; then a figure emerged to lead others away.

“Jesus came to show us the way,” Firl said, permitting the interpreter to speak again. He smiled as he appeared to paraphrase a quote from the Gospel of John: “(He is) the light, and the light in our lives.”

He added: “I feel like sign language is in a way universal — there’s something there that everyone can understand.”

Religion is closely tied to the history of Gallaudet, which Congress authorized to confer college degrees in 1864. One of the school’s oldest and most prominent buildings is Chapel Hall, where students were once required to attend services. Among its celebrated graduates is Andrew Foster, the first African American to receive a bachelor’s degree at the school, who worked as a missionary to establish schools for the deaf throughout Africa.

“Gallaudet is, at its core, deaf — but (also) at its core are our beliefs and our faiths,” Firl said.

For the most part, Gallaudet students describe a campus religious life similar to that at virtually any small liberal arts college. Sunni and Shiite Muslims, who use a common prayer room that can accommodate an array of Islamic traditions, casually discuss their religious differences. Jews and Christians belong to various on- and off-campus organizations and support groups that host worship services and Bible studies. 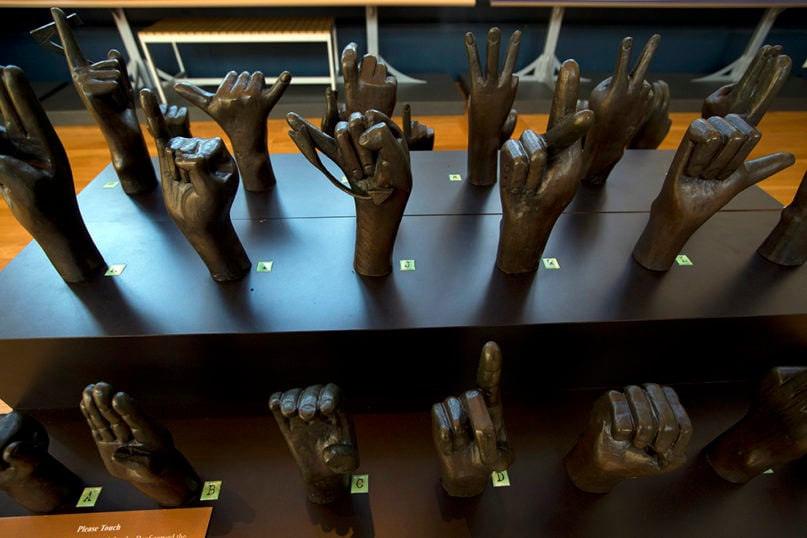 Students of all faiths report occasionally being asked about their beliefs by more secular peers, sometimes to dramatic effect: Firl recounted an incident where he fell asleep reading the Bible at a party, only to be awakened by astonished friends who joked with him about his reading material.

As at other American campuses, religious students say they can sometimes feel isolated. But Abigael Mercurio, a Christian graduate student who is not deaf but signed throughout her interview with RNS, suggested that some deaf people’s disaffection with organized religion is heightened by frustrating encounters with religious institutions.

“I’ve heard people tell me stories where they have negative experiences working with the church, or they feel that they’re deaf because God has punished them in some way, punished their family,” said Mercurio, who grew up a nondenominational Christian.

Alana Solomon, a graduate student who is hearing, pointed to parallels between deaf encounters with persecution and maltreatment and those experienced by Jews such as herself.

“I would say here at Gallaudet (oppression) is a much more common discussion — in a positive way,” she said.

For many at Gallaudet, faith activism is inseparable from the experience of being deaf or hard of hearing. Because Gallaudet receives funding from Congress, student diplomas carry the signature of the president of the United States. But following Donald Trump’s election, some students have begun requesting to have the commander in chief’s autograph removed from their graduation certificate — including Solomon, who said her desire to expunge the president’s name was partially inspired by her Jewish faith. 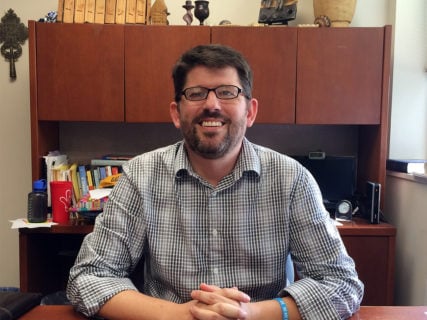 Conversations about injustice are a constant at Gallaudet, which boasts a history of activism, much of it rooted in forging solidarity across difference. When Professor Kirk VanGilder’s class on interfaith work coordinated with the campus Hillel, a Jewish organization, to hold a candlelight vigil in October 2018 after the massacre at the Tree of Life Synagogue in Pittsburgh, Pennsylvania, the gathering seamlessly incorporated commemorations for two African Americans shot at a Kroger in Kentucky and discussion of an anti-transgender incident that occurred on campus.

“We had a vigil that was mostly framed around the Tree of Life event, but also brought in intersections of other kinds of discrimination and marginalization happening on campus,” VanGilder, an ordained Methodist minister, said through an interpreter. “We had a number of people seated from different faiths in the audience.

“Maybe I’m here for you more because we’re both deaf, and that becomes a bridge for developing religious solidarity,” VanGilder said.

Students in VanGilder’s current class added that Gallaudet’s religious diversity lends itself to interfaith dialogue. Anne, the granddaughter of a Baptist minister, said her exposure to other faiths had altered her understanding of faith itself.

“Gallaudet in general has changed my perspective,” she said through an interpreter. “My freshman year my roommate was Muslim, and this was the first Muslim friend I ever had. I learned so much from that person.”

The school is known for exerting broad influence on deaf communities in the U.S. and abroad, and its alumni can crop up in prominent faith spaces: Firl is slated to star in a film produced by Deaf Missions, an Iowa-based Christian group that claims “only 2%” of deaf people “have been introduced to Jesus.”

Firl, who attends a Church of the Brethren congregation in Frederick, Maryland, portrays the titular Christ in a pilot version of the film that focuses on the biblical story of a woman who committed adultery. With enough funding, they are hoping to expand production to chronicle Jesus’ entire life.

“The Bible is wonderful, but (some) people don’t have language to read it, so we focus on presenting it in ASL,” he said.

“I’m a little biased, but I think the Bible is best told in sign language.” Opinion
Deaf Christians often struggle to hear God’s word, but some find meaning in the richness of who they are 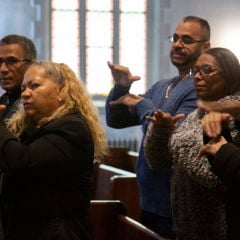 News
A silent worship revival at an Episcopal church for the deaf
Follow us on Facebook!
Submit your photos to RNS