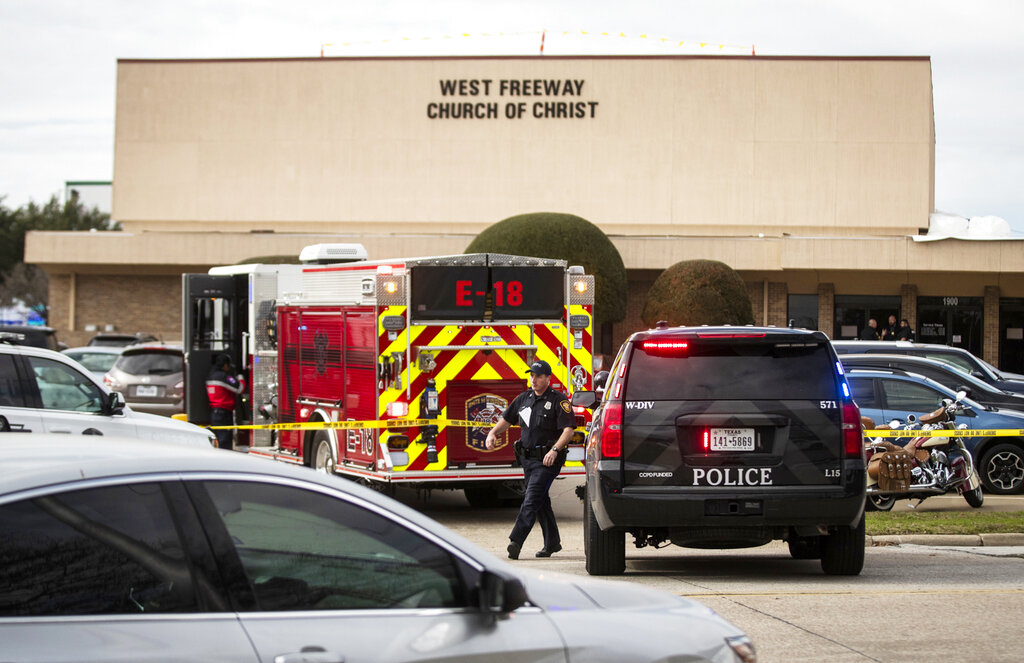 WHITE SETTLEMENT, Texas (AP) — A man who trained others in his Texas church to use guns to protect the congregation fatally shot a gunman seconds after he opened fire during a service, the Texas attorney general said Monday (Dec. 30).

Jack Wilson fired a single shot, quickly ending the attack that killed two people at the West Freeway Church of Christ in the Fort Worth-area town of White Settlement. More than 240 congregants were in the church at the time.

Wilson's bio on Facebook listed him as a former Hood County reserve deputy and a firearms instructor. He posted about the attack a few hours after it happened, saying the event "put me in a position that I would hope no one would have to be in."

"But evil exists, and I had to take out an active shooter in church. I'm thankful to GOD that I have been blessed with the ability and desire to serve him in the role of head of security at the church."

Speaking outside the church, Texas Attorney General Ken Paxton said authorities "can't prevent mental illness from occurring, and we can't prevent every crazy person from pulling a gun. But we can be prepared like this church was."

The Texas Department of Public Safety on Monday identified the attacker as Keith Thomas Kinnunen, 43. His motive is under investigation.

Investigators searched Kinnunen's home in River Oaks, a small nearby city where police said the department's only contact with the suspected gunman was a couple traffic citations.

But Kinnunen appeared to have more serious brushes in other jurisdictions. He was arrested in 2009 on charges of aggravated assault with a deadly weapon in Fort Worth and in 2013 for theft, according to Tarrant County court records.

He was arrested in 2016 in New Jersey after police found him with 12-gauge shotgun and rounds wrapped in plastic in the area of an oil refinery, according to the Herald News Tribune in East Brunswick. It was not immediately clear how those charges were resolved.

Paxton joined other Texas officials in hailing the state's gun laws, which allow weapons in places of worship. He said the church's security team was formally organized after a measure was enacted this year that affirmed the right of licensed handgun holders to carry a weapon in places of worship, unless the facility bans them.

"The big emphasis came after they realized they are able to protect themselves," Paxton said.

That law was passed in the aftermath of the deadliest mass shooting in Texas history, which was also at a church. In the 2017 massacre at First Baptist Church of Sutherland Springs, a man who opened fire on a Sunday morning congregation killed more than two dozen people. He later killed himself.

In a livestream of Sunday's church service in White Settlement, the gunman can be seen getting up from a pew and approaching someone at the back of the church before pulling out a gun and opening fire. Congregants can be heard screaming and seen ducking under pews or running as papers fly to the floor.

"I think you can see by the video, that that guy was surrounded rather quickly by more than just a few people," Paxton said.

Isabel Arreola told the Star-Telegram that she sat near the gunman and that she had never seen him before the service. She said he appeared to be wearing a disguise, perhaps a fake beard, and that he made her uncomfortable.

She said the man stood up, pulled a shotgun from his clothing, opened fire and was quickly shot.

"I was so surprised because I did not know that so many in the church were armed," she said.

Sunday's shooting was the second attack on a religious gathering in the U.S. in less than 24 hours. On Saturday night, a man stabbed five people as they celebrated Hanukkah in an Orthodox Jewish community north of New York City.

Prior to the shooting, the gunman had drawn the attention of the church's security team because he was "acting suspiciously," minister Jack Cummings told The New York Times. He said the team is composed of congregants who are licensed to carry guns and practice shooting regularly.

Cummings said the church added the team because of "the fact that people go into schools and shoot people."

The Texas Department of Public Safety on Monday identified the dead as Anton Wallace, 64, of Fort Worth and Richard White, 67, of suburban River Oaks.

Wallace's daughter, Tiffany Wallace, told Dallas TV station KXAS that her father was a deacon at the church and had just handed out Communion when the gunman approached him.

"I ran toward my dad, and the last thing I remember is him asking for oxygen. And I was just holding him, telling him I loved him and that he was going to make it," Wallace said.

Her father was rushed to a hospital but did not survive, she said.

"You just wonder why? How can someone so evil, the devil, step into the church and do this," she said.

White's daughter-in-law, Misty York White, called him a hero on Facebook: "You stood up against evil and sacrificed your life. Many lives were saved because of your actions. You have always been a hero to us but the whole world is seeing you as a hero now. We love you, we miss you, we are heartbroken."

An elder at the church told the Times that one of those killed was a security guard who responded to the shooter.

"He was trying to do what he needed to do to protect the rest of us," said the elder, Mike Tinius.

Britt Farmer, senior minister of the church, said, "We lost two great men today, but it could have been a lot worse."

The FBI was working to determine the shooter's motive. Matthew DeSarno, the agent in charge of the agency's Dallas office, said the assailant was "relatively transient" but had roots in the area.

Paxton said Monday that the shooter appeared to be "more of a loner." "I don't think he had a lot of connections to very many people," he said.

In a 2009 affidavit requesting a court-appointed attorney, Kinnunen listed having a wife and was living with four children, according to court records. He told the court he was self-employed in landscaping and irrigation work.

White Settlement's website says it was named by local Native Americans in the 1800s for white families then settling in the area. City leaders who worried that the name detracted from the city's image proposed renaming it in 2005, but voters overwhelmingly rejected the idea.