(RNS) — Recently, the online store Zorestina came under fire for its “Namaste” product line. Appearing in its yoga section, all of the items in the line are labeled “Namaste, Mother —-er.” In case you missed the religious reference, an om (ॐ) symbol takes the place of a letter in the word not printable here.

Given the ubiquity of om and namaste these days — precisely the ubiquity that Zorestina is counting on for sales — we hardly need explain that these are two prominent Hindu terms, concepts from an indigenous Indian tradition stretching back millennia. Om is believed to be the primordial sound that both accompanied the creation of the universe and the vibrations that undergird it.  It precedes and concludes every mantra (hymn) recited by Hindus.

Likewise, namaste is a Sanskrit greeting indicating that the divine essence that resides within oneself is the same divinity within all living beings. When a Hindu says “namaste” with folded hands and bows, she is acknowledging that the all-pervasive divinity is also in the person before her.

By reducing namaste to a catchphrase, and an in-your-face one at that, Zorestina desacralizes words and ideas that are deeply meaningful to Hindus. Worse still, the obnoxious product line tells a story about Hinduism and its place in Western culture before you or anyone can grasp what the knowledge tradition is really about.

The Zorestina affair is just the latest example of American merchants abusing Hindu symbols, terms and imagery in profitable jokes. In the past year alone we’ve seen Pharrell Williams and Adidas’ line of Holi shoes; toilet seat covers featuring the Hindu deities Shiva and Kali; craft beers named after Krishna or sporting images of om and Ganesha; as well as skateboards and dog beds with Hindu themes. Society 6 sells more than 200 varieties of Ganesha bathmats on its website.

RELATED: Hindu guest chaplain, at your service — but does he speak for all Hindus?

Many of these have been met with protests by Hindus, but attempting to eradicate all the offensive products is like playing whack-a-mole. When Ganesha bathmats were successfully removed from Amazon last year, they quickly reappeared on Wayfair. When the offending “Namaste” campaign was removed from Zorestina as the result of a petition started by one of us, more than a dozen variants appeared on the same platform in a matter of hours.

This is not only frustrating, but each time Hindus object, we are forced to face the world and explain ad nauseam why this is damaging to us.

It does not seem to be enough to simply point out that putting an om in a profanity is deeply disturbing and actively mocks and degrades a religious tradition. Likewise, putting a Hindu deity on objects we step on, wipe our feet on, in rooms where we defecate and urinate goes beyond mere appropriation and constitutes a deep and painful hollowing out of divinity.

In Hindu culture, the insult is especially painful. Shaucha, or attention to inner and outer cleanliness, is of central importance, especially the cleanliness of spaces where divine objects and images are kept. It is disrespectful in Hindu practice to point our feet in the direction of our elders or step on or over people, art, books or musical instruments. Placing images of divinity in the bathroom, then, especially on the toilet, is a slap in the face. 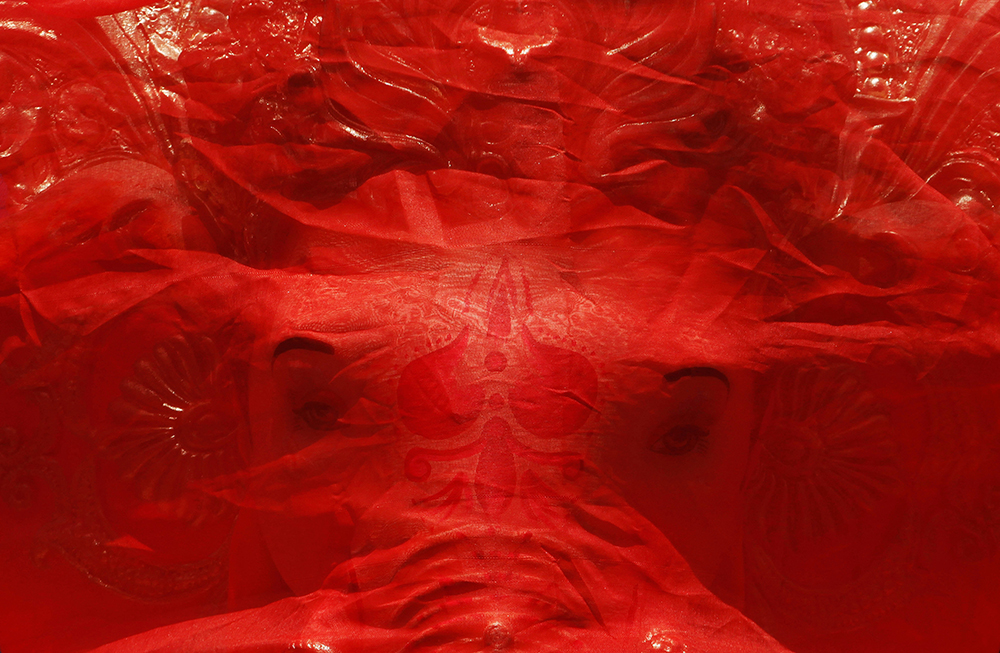 A statue of elephant-headed Hindu god Ganesha is wrapped in a red cloth as it is transported on a vehicle for Ganesha Chaturthi festival in Ahmadabad, India, on Sept. 13, 2018. The 10-day festival celebrates the birth of Ganesha. (AP Photo/Ajit Solanki)

Western culture, of course, is very good at ignoring these kinds of sentiments. One way to fend off such ethical arguments is to protest in the name of free speech. In 2004, a student from India living in the Bay Area sued the Lost Coast Brewery in Northern California over its depiction of Ganesha on its “Indica” beer. A court decided for the brewery under the First Amendment as protected free speech. Since then, the legal opinion has been wielded elsewhere to delegitimize Hindu protests against this desacralization.

Ownership is another inviolable Western value. Zorestina responded to a complaint about its Namaste products with a boilerplate email that linked to an intellectual property claim. The company could only see the discussion in terms of legal ownership. We even briefly considered claiming ownership of the images as Hindus, just to prompt the company to recognize our agency.

The question of ownership raises another one: Should the use of Hindu symbols and imagery be restricted for the use of the Hindu community alone?

This is tricky, but we believe the answer is “no.” However, we do think Hindus have a right to expect others to  recognize, respect and replicate the context in which we see and conceive of these symbols.

It’s not just the symbols that we are concerned about; it’s people. For the most part, Hindus are still gaining a foothold in the West. Until we are seen as equals here, the persistent misuse of Hindu imagery defines us as caricatures that originated from our not-so-long-ago colonization.

This is what we mean when we say that kitschy riffs on Hinduism tell our story before we can explain who we are and what our faith means to us. The irreverent gaze of “Namaste, Mother—-er” teaches the public to think about Hinduism as something familiarly reducible, worthy of parody.

You might get this notion because you treat your own dominant religion this way. A bumper sticker or a television show that pokes fun at the rapture may offend some, but it doesn’t disturb the mass of Americans’ knowledge of Christianity’s basic tenets. You can joke about Christianity because you know what it is: the world’s most popular religion, which has touched every corner of the planet.

Minoritized religions don’t have that liberty. Hinduism’s ancestral history is one of extreme cultural extraction and degradation. In India, a land which experienced centuries of religious colonization, contempt for our knowledge tradition has led to hatred and psychological, academic, geopolitical and colonial violence against us.

We’re certainly not alone. For instance, you don’t see much merchandise being sold, particularly in “progressive” circles, that openly mocks Judaism or Islam. And you shouldn’t, because those are minority faiths in this country and they need some measure of protection, for a variety of reasons.

This is the part of the discussion when we Hindus are inevitably accused of taking things too seriously. Can’t we lighten up? You hear this even from some corners of the Hindu community itself, which argues that we can’t get upset about “every little thing” and Godsplain every battleground away.

Hindu Americans are often viewed as a prosperous, model minority; our success in the professional world, the thinking goes, exempts us from taking offense.

But this is to ignore the dominant culture’s power — indeed, part of its function — to order society according to the established hierarchy. Selling merchandise that makes fun of certain belief systems, including Hinduism and other dharma traditions, is a form of public pedagogy, one that helps sustain disrespect and humiliation for its targets.

Similarly, what underpins free speech and “ownership” arguments is the desire to cling to a status quo, shielding people from confronting the consequences of their actions. Corporatism is an insidious limb of colonialism.

These battlegrounds of bathmats and yoga shirts are indeed small, which is why it sounds so sensible to say that we simply need to chill out. But unless we engage with these phenomena, they will become norms, a cultural staple. As long as people buy these products, it is unlikely that they will disappear.

We hope that making this argument here, reaching out to communities that share our values of belonging, reverence and knowledge, even if we practice them differently, can help mobilize larger networks of compassion and support. We might not be able to stop every symptomatic piece of anti-Hindu merchandise, but we might be able to disrupt the system through the powerful mechanism of intergroup dialogue and solidarity.