(RNS) — Responding to a rash of violent attacks on Orthodox Jewish communities in New York and New Jersey, several Jewish organizations will lead a march in New York City on Sunday (Jan. 5).

The following day, the American Jewish Committee will kick off a new campaign urging Jews around the world to wear clothes or jewelry that identifies them as Jewish.

“The premise is, ‘Let’s stand up and identify ourselves very publicly as Jews,’” said David Harris, CEO of the AJC. “Whether we’re Orthodox or not, let’s all stand up and say, ‘We’re one people with a common destiny.’”

Titled #JewishandProud, the purpose of the campaign is to show solidarity with Orthodox Jews who have been subject to street violence and acts of terror over the past few months by assailants suspected of harboring anti-Semitic beliefs.

Attacks on Orthodox Jews have been growing more frequent this year, climaxing in the stabbings of five Jews who had gathered for a Hanukkah celebration in the home of an Orthodox rabbi in Monsey, New York, about 30 miles northwest of New York City, last week. That followed a mass shooting Dec. 10 at a kosher deli in Jersey City, New Jersey, that killed two Hasidic Jews. 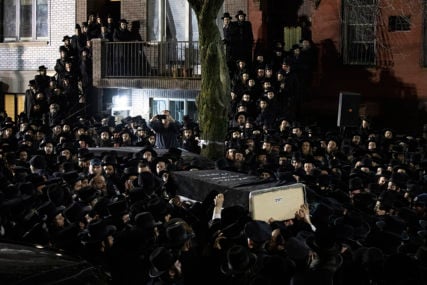 A string of other attacks on Orthodox men have occurred in both states, particularly in Jewish enclaves in Brooklyn, New York, where New York City Mayor Bill DeBlasio has increased police patrols.

Just this week, a 22-year-old Jewish man was chased down the streets of Williamsburg, a section of Brooklyn, and punched by two women who hurled hateful epithets at him, police said.

The Anti-Defamation League’s anti-Semitism tracker lists 37 incidents in December alone, with 21 of them in New York state.

Sunday’s planned solidarity march will cross from Manhattan’s Foley Square over the Brooklyn Bridge. Organized by the UJA-Federation of New York, the Jewish Community Relations Council of New York and others, the “No Hate. No Fear” march will conclude with a rally in Brooklyn’s Cadman Plaza.

There are an estimated 1.5 million Jews in the New York region, the largest Jewish community outside of Israel.

“The symbolism of going over the bridge into a borough that has seen the greatest incidents by far of anti-Semitic attacks seemed appropriate,” said Eric S. Goldstein, CEO of the UJA Federation of New York.

Goldstein said he expects buses of people from Washington, D.C.; Cleveland, Ohio; Boston and Philadelphia, as well as a delegation of Jews from Toronto.

Recently the UJA announced it was hiring a director of security that will supervise a team of six additional UJA staff in the New York boroughs and in Westchester County and Long Island. The team will help Jewish institutions beef up security on their properties.

The #JewishandProud campaign has likewise grown in the short space of time since it was announced. Harris said he has already gotten commitments from as far as Australia, England and Italy. The idea is for Jews to wear yarmulkes and necklaces with the Star of David  and post photos with those items on social media.

American Jews have increasingly been scared to identify their faith publicly. An October survey by the AJC found that 31% of Jews avoided wearing symbols or objects identifying them as Jews. Another 25% said they “always,” “frequently” or “sometimes” avoided certain places, events or situations out of concern for their safety.

The Orthodox Jews who have been attacked were easy to identify because of their clothing: Orthodox men typically wear black hats and suits; women wear long skirts with wigs or head scarves.

In some European countries, where the atmosphere has also grown hostile for Jews, men who wear yarmulkes — a sign of reverence for God — have taken to wearing baseball caps on top to hide the skullcap, often called a kippah.

European synagogues have increased security measures, including the presence of armed guards. Visitors are required to show their passports before they’re allowed in. In other parts of the world, such as a synagogue formed in the United Arab Emirates a few years ago, the congregation meets in an unmarked home in a residential suburb of Dubai. Anyone wishing to attend must call ahead to get the address.

It’s that kind of defensive cloaking that the AJC wants to fight against.

Harris said American Jews refuse to become Marranos, a term of derision applied to Jews of Spanish descent who in the 14th and 15th centuries were forced to convert to Christianity to save their lives but secretly held onto their Jewish faith. (The term may come from the word for swine or pig and was intended to impart disgust.)

“This is America,” said Harris. “It’s always been a country that invited us to affirm our identity, not hide or deny it.”