(RNS) — When President Donald Trump tweeted about the possibility of retaliatory strikes on “52 Iranian sites,” including some that are important to “the Iranian culture,” the world reacted with alarm.

Strikes on cultural sites are considered illegal — some would even say a war crime. The U.S. is a signatory to several international agreements, including the 1954 Hague Convention, which calls on warring parties “to protect cultural property.”

But scholars say it’s important to distinguish today’s Iranian leadership from the rich legacy of Persian culture, which predates the rise of Shiite theocracy, Islam, even monotheism.

Iran is part of the cradle of civilization, the place where civilization is understood to have emerged. Its history goes back at least 2,000 years before the rise of Islam. The country, which is about twice the size of Texas, has many religious sites important to Jews and Christians, too.

“It has very significant sites for the Zoroastrian religion, Jewish and Christian communities, and of course Muslims,” said Omid Safi, professor of Asian and Middle Eastern studies at Duke University. Safi grew up in Iran until the age of 15, and he studies Persian mystical literature. Many pointed out that Iran has 22 cultural UNESCO World Heritage Sites. But in addition, a number of its religious landmarks continue to function as places of worship and pilgrimage.

“They’re not just cordoned off but are woven into the fabric of everyday life,” said Seema Golestaneh, assistant professor of Middle East studies at Cornell University.

Golestaneh compared the threat of attacking these sites to “threatening to bomb Notre Dame or the Sistine Chapel.”

Thousands of people took to Twitter in the wake of the president’s tweet using the hashtag #IranianCulturalSites to post photos of their favorite Iranian landmarks. Here are five that serve as important religious sites:

Long before Islam became ascendant, Zoroastrianism was the dominant religion in Iran. In Zoroastrianism, human life is a struggle between good and evil, truth and deceit, light and darkness. Fire is sacred to Zoroastrians as a symbol of truth, and fire temples began to emerge around the fifth century B.C.

Zoroastrian fire temples can be found in many places across Iran but this brick Zoroastrian temple holds a fire that has burned for more than 1,500 years. This fire, located in Yazd to the east of Shiraz, has burned since 470, during the reign of the Sasanian Empire.

The Tomb of Esther and Mordechai

Located in Hamadan, the tomb is believed by some to house the remains of the biblical Queen Esther and her cousin (or by some accounts, uncle) Mordechai. It is the most important pilgrimage site for Jews in the country. 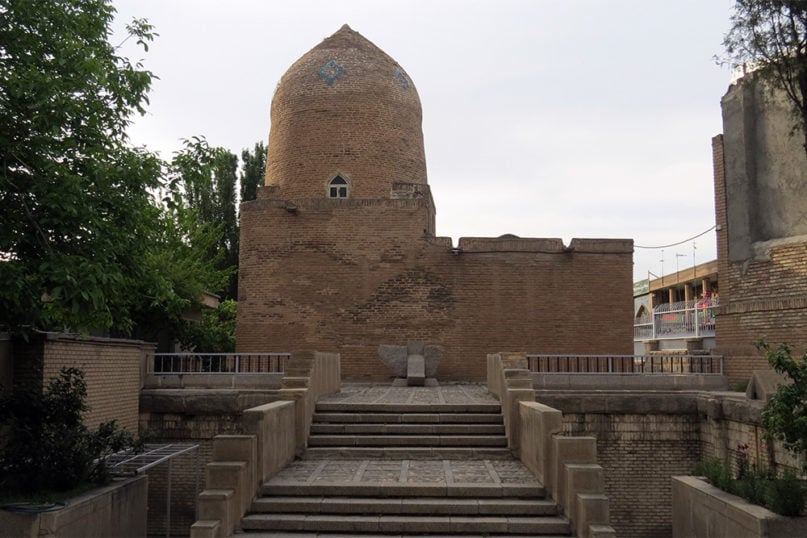 The Tomb of Esther and Mordechai in Hamadan, Iran. Photo by Zahramoradii/Creative Commons

Esther, as described in the Bible, was the Jewish queen of the Persian king Ahasuerus. In the Book of Esther, Mordechai informs her of a plot to kill the Jews, and together they work to save Jews throughout the Persian Empire from annihilation.

The exact date of the 50-foot-tall brick dome’s origin is disputed. An outer chamber holds tombs of famous rabbis. The interior chamber features Hebrew writing along the walls and holds two carved sarcophagi, with the two burial plots for Esther and Mordechai.

The Tomb of Daniel

There are many places that claim to be the traditional burial place of the biblical prophet Daniel, but this one, in Susa, Iran, is the most widely accepted. According to the biblical book by the same name, Daniel was taken to Babylon after the destruction of Jerusalem. There, he was rescued from lions with the aid of the prophet Jeremiah. The apocalyptic genre of the Book of Daniel is important to Jews, Christians and Muslims. Above the mausoleum of Daniel is a conical-shaped building. 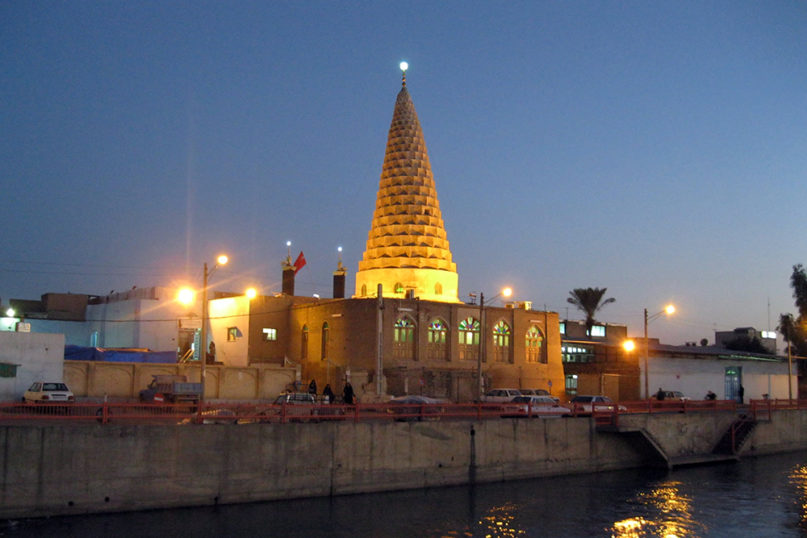 The Tomb of Daniel in Susa, Iran. Photo by Meysam Ebrahimi/Creative Commons

The Tomb of Cyrus the Great

Many evangelicals have compared Trump to King Cyrus, who became the first emperor of Persia. Cyrus is celebrated multiple times in the Bible for freeing a population of Jews who were held captive in Babylon — an act some consider to have made him anointed by God. Cyrus died in 530 B.C. and is buried in Pasargadae, an archaeological site about 56 miles from the modern city of Shiraz. According to literary sources, more than two centuries later, Alexander the Great ordered his tomb to be restored. The Tomb of Cyrus the Great in Pasargadae, Iran. Photo by Bernd81/Creative Commons

Vank means “monastery” or “convent” in the Armenian language, and this one is especially important to Armenians who are part of the Armenian Apostolic Church. There are a total of 16 Armenian churches in the New Julfa region on the outskirts of Isfahan. Murals adorn the walls of the cathedral with gold inlay. The cathedral was completed in 1664 and includes a bell tower, built in 1702. It is still used. 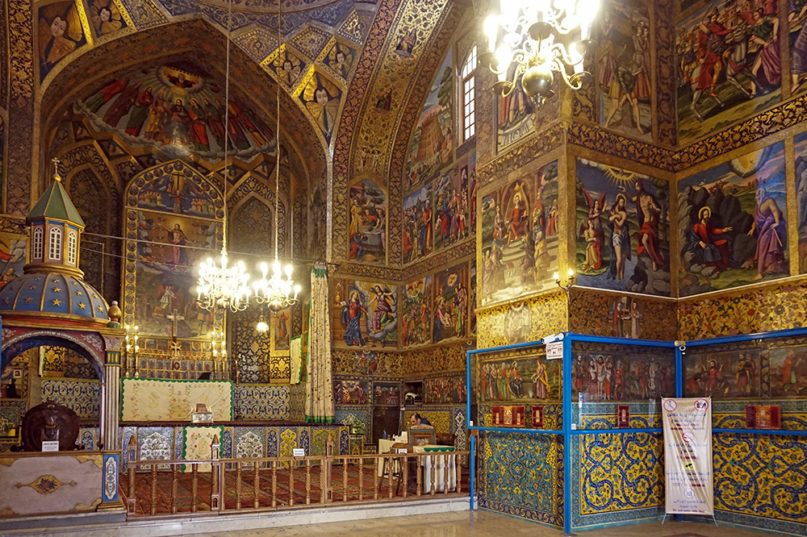 The interior of Vank Cathedral in Isfahan, Iran. Photo by Bernard Gagnon/Creative Commons

Many Shiite Muslims revere the 12 successors to the Prophet Muhammad as divinely ordained leaders. Only one of the 12 is buried in Iran — Imam Reza, who was the eighth imam. (Shrines to the other 11 imams are in Iraq and Saudi Arabia.) The Imam Reza shrine, a huge complex containing a mausoleum, a museum and a library in the city of Mashhad, is a massive pilgrimage site that attracts upward of 25 million visitors a year. It is one of the most important Muslim shrines in the country. 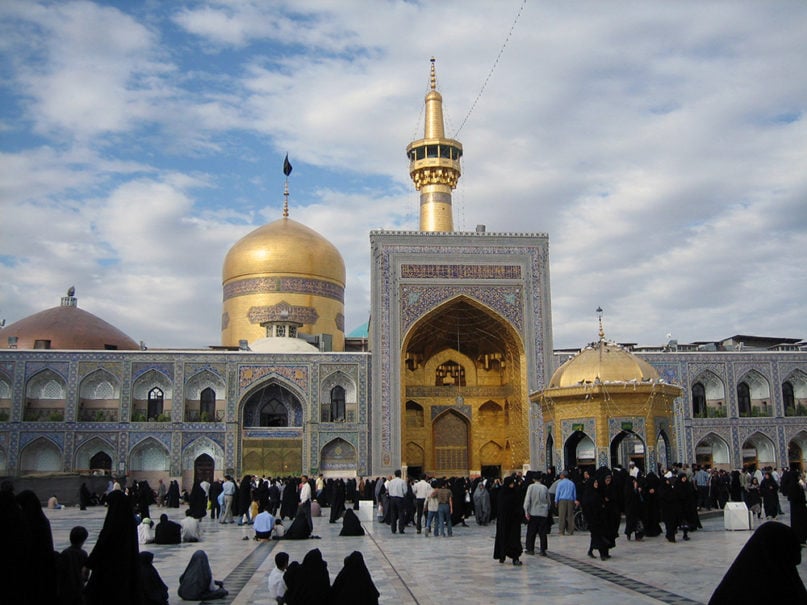 The shrine of Imam Reza in Mashhad, Iran. Photo by Iahsan/Creative Commons