(RNS) — For Nathan Brittsan, it was his own “mini dark night of the soul.”

Days into his first quarter as a student at Fuller Theological Seminary, Brittsan was expelled.

He spent another six months “in limbo,” he said, trying to appeal the school’s decision.

While the American Baptist Seminary of the West was within his own denomination, Brittsan said, he felt called to Fuller, an evangelical, multidenominational graduate school. He never hid his sexual orientation or the fact that he belonged to an LGBTQ-affirming church, he said. He knew others who attended the school who were gay or affirming. He knew the school allowed an LGBTQ student group on campus.

And, he said, he “knew that they really were progressive, especially on issues like immigration and racial relations.

“I just felt like there were a lot of ways they were being a very prophetic voice for the evangelical community,” he added. “And I thought that their progressiveness extended a little further.”

So he was surprised to receive the letter of dismissal from the school — all because officials learned he was married to another man.

Brittsan is the second graduate student expelled from Fuller over a same-sex marriage to join a lawsuit against the seminary.

In an amended complaint filed this week, two former students — Brittsan and Joanna Maxon — allege Fuller Theological Seminary violated anti-discrimination laws when it expelled them after learning they were married to people of the same sex.

The outcome of the suit could significantly impact how faith-based institutions across the country apply Title IX protections to LGBTQ students in same-sex marriages. Title IX prohibits sex discrimination in federally funded education programs or activities.

“That’s one of the main implications,” said Paul Southwick, the attorney representing Brittsan and Maxon.

“That would apply not only to this institution, but to other religiously affiliated institutions across the country, whether or not they have religious exemptions from Title IX.”

Maxon first brought the lawsuit against Fuller in November.

Described in the lawsuit as a “wife and mother who hoped to use her degree to become a better supervisor,” she had been expelled from the seminary in October 2018 as she neared the end of her studies.

Maxon had married her wife in 2016 after the legalization of same-sex marriage, according to the suit. They filed a joint tax return, and Maxon authorized the IRS to share her tax filing with Fuller for financial aid purposes. 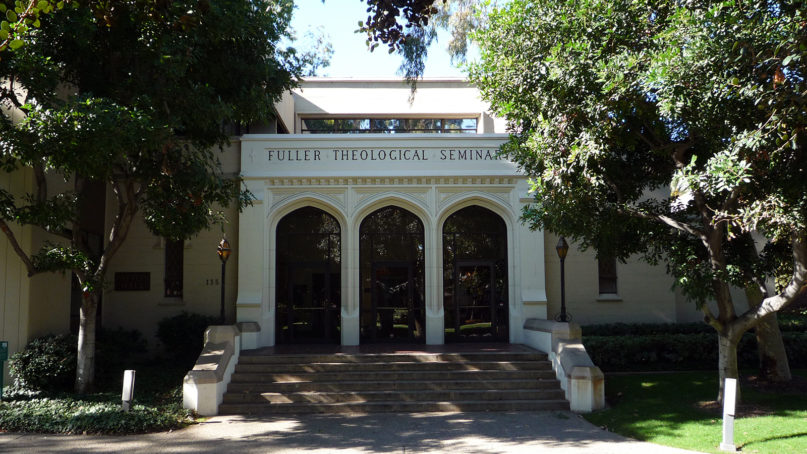 When the Office of Student Financial Services received her tax return, it submitted a complaint she had violated the sexual standards statement in the school’s community standards.

Brittsan recognized his own story in an article about Maxon’s suit in the LA Times, he said, and reached out to her attorney to see how he could help.

Brittsan had received his letter of dismissal the year before, he said.

The letter said Fuller had received his request to change his name and learned he had married another man, according to the suit. A year into marriage, he had applied to the school using his husband’s last name, which he had taken. The school, perhaps drawing from his undergraduate transcripts, registered him under his previous last name, he said.

The letter then said he, too, had violated the seminary’s community standards, which reserve sex for marriage, defined as a “covenant union between one man and one woman.”

“The seminary believes premarital, extramarital, and homosexual forms of explicit sexual conduct to be inconsistent with the teaching of Scripture. Consequently, the seminary expects all members of its community — students, faculty, administrators/managers, staff, and trustees — to abstain from what it holds to be unbiblical sexual practices,” the community standards read.

But those standards don’t “prohibit same-sex dating relationships or same-sex civil marriages,” according to the lawsuit.

And neither Brittsan nor Maxon were asked whether they had engaged in the “homosexual forms of explicit sexual conduct” the standards do prohibit, it said.

Fuller may be “religious in nature,” according to the lawsuit, but it does not require students to adhere to a statement of faith.

The seminary also has not applied for or received a religious exemption from federal Title IX requirements, although it accepts federal funding. It affirms that Title IX “prohibits discrimination based on gender in educational programs that receive federal financial assistance” and “protects men and women from unlawful sexual harassment in school programs and activities.”

Fuller violated Maxon’s privacy rights by using her private tax return information “to essentially start an investigation against her into her same-sex marriage,” according to Southwick.

“There are student privacy issues because now that more and more same-sex marriages are occurring, particularly if they are people of faith who would like to attend a faith-based institution, they may have no idea that by submitting their FAFSA form, they are essentially putting themselves in jeopardy for expulsion or admission,” the attorney said.

Southwick said his clients are both Christians who believe in the Bible and in the mission of Christian higher education.

To Southwick, it’s telling that Fuller is seen by many as a progressive institution that cares about immigrant rights, social justice and diversity. Not only has the school allowed an LGBTQ student group on campus, he said, but also he’s heard of faculty members who have officiated same-sex marriages.

“At least among faculty and certain administrators and students, there is a lot more openness and support for LGBTQ people than the decisions made by a couple of deans” at the school, Southwick said.

The Becket Fund for Religious Liberty, a Washington, D.C.-based nonprofit, is representing Fuller.

Becket defends religious liberty issues and, according to its website, is the only law firm that defends all religious beliefs. That includes such high-profile cases as the Supreme Court case Burwell v. Hobby Lobby and the recent United States of America v. Scott Warren.

Daniel Blomberg, senior counsel for Becket, said the firm was reviewing the new amendments in the lawsuit.

“This case is about whether or not the government can interfere with a religious organization’s ability to train its leadership,” Blomberg said.

It’s a “very important case,” he said, because it could affect many faith groups. The way Blomberg sees it, if Sikhs decided to change requirements regarding wearing a turban, or if Jews decided to change their beliefs about keeping kosher, “those are decisions that those faith groups have the right to make on their own.”

Additionally, Blomberg said Fuller did not expel Brittsan, but rather it “ultimately didn’t allow him to matriculate into the program because it became clear he wouldn’t be able to meet the community standards.”

He added that Maxon kept the credit hours she completed and that Fuller refunded her for any of the classes that started “after she revealed that she was violating the community standards.”

“When they enter, they agree to abide by the community standards that set out what it means to be a part of Fuller’s religious community,” he said.

“Those standards very clearly include exactly the issues that are implicated here.”

But Trista Eazell, a student at Fuller and pastoral intern at an LGBTQ-affirming church, said it’s scary the way the school chooses when and how to apply those guidelines.

“There’s no consistency whatsoever,” said Eazell, who identifies as heterosexual.

Many students go against the seminary’s sexual standards statement and don’t get disciplined. However, she said, “it seems like if you are gay, that’s a different story.”

She also is organizing protests and other gatherings to shed light on discrimination at Fuller with the help of Brave Commons — a nonprofit that advocates for LGBTQ students in Christian universities — and other students at Fuller, she said.

Eazell said they aim to show that Fuller’s community standards “do not reflect the student body, the community around the school and the Christian community in general.”

She sees this case as historic.

“Nothing quite this big has happened at a Christian university,” she said. “It’s a big deal.”

Meantime, Brittsan is continuing his studies at the American Baptist Seminary of the West — but his experience at Fuller has put him a year behind.

It also left him with a sense of disillusionment. “It was difficult to approach this situation in a positive way because it was so disappointing that a Christian institution had treated me this way,” Brittsan said.

It was terrible, he said. It was humiliating.

And he hopes the lawsuit he’s brought with Maxon means it won’t happen to anyone else.

“As much as I did not want to put myself in the public spotlight,” he said, “I thought it was very important to make sure this kind of situation didn’t happen to anyone else again, because I wouldn’t wish this situation on anyone else.”