(RNS) — The last decade has witnessed slowing growth for the Church of Jesus Christ of Latter-day Saints in many parts of the world. The 2018 growth rate internationally was 1.2%, and half that — a rate of just 0.6% — in the United States.

But those numbers don’t tell the full story, according to Matthew Martinich, a researcher who founded the LDS Church Growth blog, which tracks Mormon growth and retention around the world. At the end of each year, Martinich summarizes the most and least encouraging trends in the data worldwide for The Cumorah Foundation, where he is project manager. You can read the full report here, but here are three of the highlights from the glass-half-full side of the story.

1. An increase in missionaries

What’s particularly remarkable about this increase is that LDS birth rates began falling in the 1980s, both in North America and in many places abroad. In the 1990s, Martinich says, there was “quite a lag” in the number of children of record reported by the church, meaning those who were formally blessed as babies.

That means that, despite having a lean missionary pool of young people to draw from 18 or 19 years later, a higher percentage of people who grew up LDS are choosing to serve missions. This is not the artificial temporary surge we saw after the missionary age was lowered in 2012, when for a time there was a “double cohort” in the mission force, but genuine and sustainable growth. A good portion of these young full-time missionaries are converts themselves, Martinich says, especially outside the United States. He is quick to note that just because the church has been closing missionary training centers in several places around the world, “those closures have nothing to do with the number serving. It’s about the church conserving its resources.” Many of the closed MTCs were small, capable of accommodating only 50 to 200 missionaries at a time, which makes it expensive and somewhat redundant to maintain them.

“It’s actually more cost-efficient to send those missionaries to a few larger MTCs around the world than it is to operate little MTCs all over the place. Guatemala is a good example. The Church in Guatemala is doing really well, and it’s self-sufficient. The whole Central American area of the church has been largely self-sufficient in its needs for missionaries,” despite the closure of the Guatemalan MTC this month.

Martinich says that although membership growth has clearly slowed, congregational growth is actually quite healthy, which he attributes to the church doing a better job of “reactivating” lost members. There was a net increase of over 400 new wards and branches around the world in 2019, the highest since 2005.

Reactivation looks especially encouraging in areas of the South Pacific where we can measure the church’s own statistics (everyone who is on the rolls) with national data (only people who claim an LDS identity on the official census). There is always a discrepancy between those numbers, with the church reporting far higher overall membership than the censuses because the church data represents every baptized person, regardless of whether they have attended anytime recently. But the census data shows that more people in nations like Tonga, American Samoa and New Zealand are self-identifying as Latter-day Saints.

“Samoa is probably the best example,” says Martinich. “In five years between 2011 and 2016, census-reported membership increased by nearly 36%, which is huge considering how many members live there.” That’s a much higher increase than what the church’s membership rolls are showing (nearly 9%), which points to successful reactivation efforts among people who are already members.

The Samoan example is important for another reason: American Samoa is about to get its first-ever LDS temple. In many ways, this seems to be a textbook case of what the church is hoping to see: a palpable renewal of commitment among current members, including those who may have been lukewarm before, resulting in the end goal of an operating local temple that is in near-constant use.

It doesn’t always work out that way, and Martinich says that the spate of temple-building announced by LDS President Russell M. Nelson over the last two years doesn’t follow a predictable pattern. Some of the 16 new temples that were announced in 2019 are predictably located in places where the church is growing, like Texas or Sierra Leone, while others will be in areas where the church has had a long-standing presence but little to no recent growth (e.g., Okinawa, Japan).

“There used to be two stakes in Okinawa and now there’s just one,” says Martinich. “It’s extremely small.” Also small is the membership in Hungary, which is about to get its own temple; there are barely 5,000 baptized members in the entire country, to say nothing of which of them are active in the church. 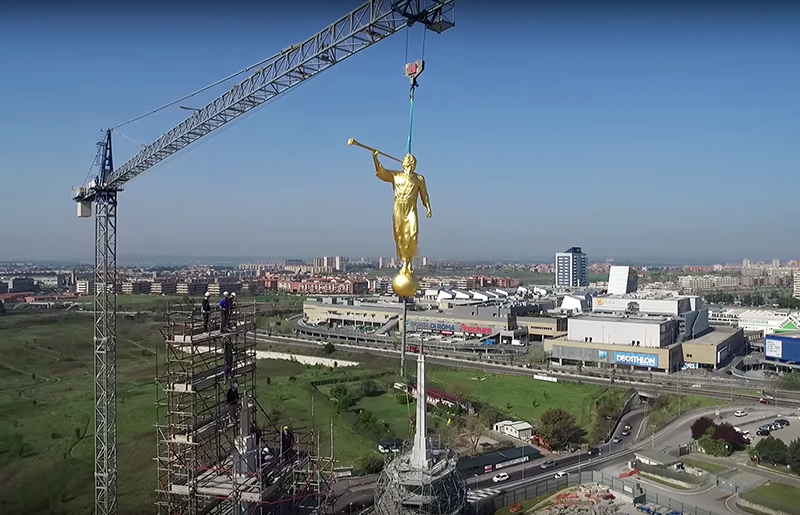 A crane moves a gold-leaf statue depicting the ancient Mormon prophet, Moroni, into position atop the new temple in Rome on March 25, 2017. Screenshot from video by Intellectual Reserve Inc.

Is there a hope that if the church builds a temple, the people will come? That its presence will invigorate a small and struggling membership like that of Hungary?

“That’s an interesting question that I’ve thought about for a long time. I don’t think so. I can think of examples where church growth has exploded after a temple, like in Ghana, and other examples where growth sputtered after the temple. Panama is in that category. After the temple was put in there, the church has foundered ever since. I think it’s very different from place to place.”

Martinich also says that there are strategic reasons for the church to continue building temples in Utah, even though almost all members who live there are already close to a temple. He suspects that the experiences that youth have in doing baptisms in the temple can help keep them in the fold during adolescence and early adulthood, the most vulnerable years for drifting away.

These three highlights don’t mean there aren’t serious challenges ahead for church growth. Martinich is particularly concerned about falling LDS birth rates, not just in the U.S. and Europe, but even in nations that continue to have a strong birth rate overall.

In Mexico, he says, non-LDS women actually have more children than LDS ones do, on average. Since much of the church’s membership growth in recent decades has come through “natural increase” (babies born to parents who are already members), and new conversions are down despite the higher numbers of missionaries trying to reach those prospective converts, the depressed birth rate is a major issue going forward.