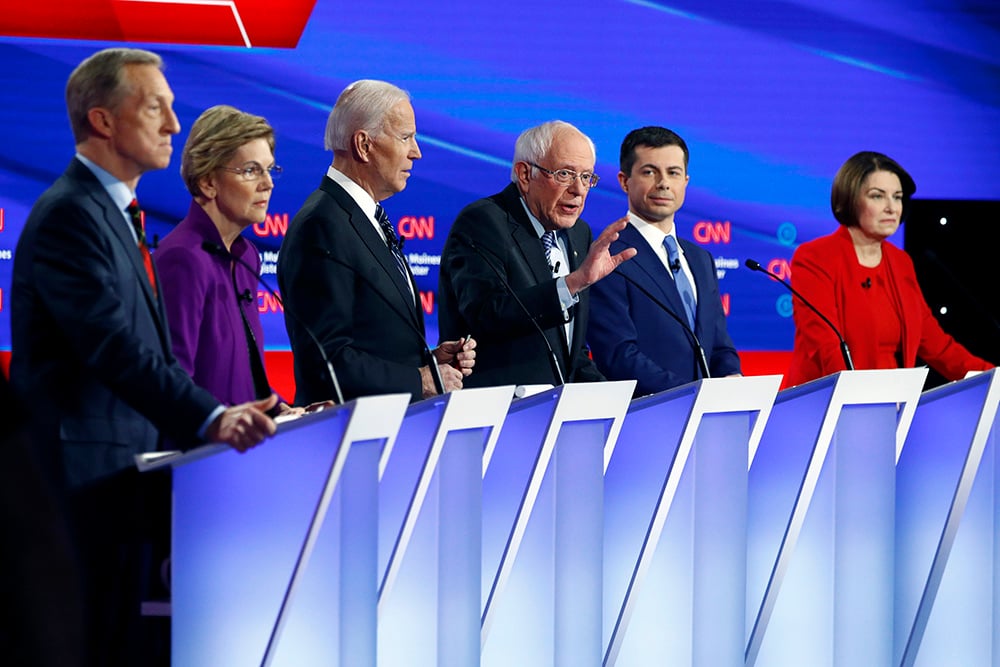 (RNS) — After the U.S. killed Iran’s top military general this month in an airstrike directed by President Donald Trump, thousands of Americans protested at rallies nationwide, from Times Square to outside the Texas State Capitol.

The airstrike served as an unwelcome reminder to many Muslim and Middle Eastern American voters about what they describe as the need for a commander in chief who will protect both the U.S. and the Middle East from further military conflict.

Any further conflict could lead to major civilian casualties in the Middle East and civil rights violations domestically if a war breaks out, warned a coalition of Shiite and Sunni American organizations. 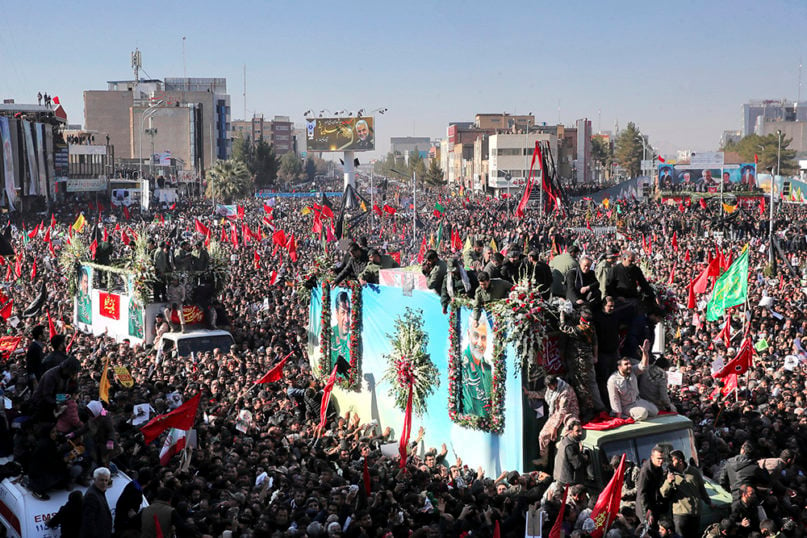 Coffins of Gen. Qassem Soleimani and others who were killed in Iraq by a U.S. drone strike are carried on a truck surrounded by mourners during a funeral procession in Kerman, Iran, on Jan. 7, 2020. (Erfan Kouchari/Tasnim News Agency via AP)

“With the current administration’s history of marginalizing ethnic and religious groups like Iranian Americans, Muslims and immigrants, there is a real fear of how civil liberties of minorities will be suspended for a false sense of security,” the groups, including the Muslim Public Affairs Council and the Shia Muslim Council, said in a statement.

Tension in the Middle East may play a role in the 2020 presidential election, at least for Muslim voters.

Shabana Mir, an associate professor at the American Islamic College in Chicago, said that Sen. Bernie Sanders' willingness to help curb America's global role and his "long and highly consistent record in domestic and foreign policy" have made him a top choice for her and many other Muslim voters.

"Homelessness, hunger and poverty go unaddressed in this country, while politicians fire up their bases to engage in military adventurism as Trump did with Soleimani, Bush did in Iraq and Afghanistan, and Obama did with his drone warfare," Mir said. " ... I am far more happy with Bernie Sanders’ record and policies than with any other candidate. Unlike others, he is in favor of cutting the defense budget."

The independent Vermont senator, who has long highlighted his vote against the invasion of Iraq as a crucial part of his record, has pledged to do whatever he can to prevent war with Iran – and to end American military involvement in the Middle East more broadly. “We must do more than just stop war with Iran,” Sanders said this month. “We must firmly commit to ending U.S. military presence in the Middle East in an orderly manner. We must end our involvement in the Saudi-led intervention in Yemen. We must bring our troops home from Afghanistan.”

This weekend, the Sanders campaign will host a rally in a Turkish community center in Houston, part of the Muslims for Bernie organizing program launched in November. Sanders’ supporters also include two Palestinian American Muslims, activist Linda Sarsour and comedian Amer Zahr, and seven full-time Muslim staffers, per a new report from the Muslim Public Affairs Council.

“As you know, Trump might be putting our country into another never-ending war, which would devastatingly affect the lives of millions of more Muslims overseas,” Harmoush wrote in a Jan. 3 email announcing a Muslims for Bernie webinar. “ ... We are ramping up our volunteer program for that very reason. Our Muslim community depends on it.”

Shakir said Sanders’ focus on bringing world leaders “together in acts of diplomacy and peace, not violence," resonates with voters.

"Bernie has consistently shown the judgment to oppose the Iraq War and fight against the policy of endless war that has endangered lives and cost us trillions of dollars,” Shakir told Religion News Service.

Bernie understands the cost of war. He acknowledges not only the deaths of American soldiers, but the deaths of thousands of Muslims in Iraq and Afghanistan. War in Iran would be far disastrous, more lives lost, trillions more spent. #Bernie2020 #Muslims4Bernie

Sanders has earned endorsements from U.S. Reps. Rashida Tlaib and Ilhan Omar, as well as former U.S. Rep. Keith Ellison, who is now attorney general for the state of Minnesota. Muslim politician Abdul El-Sayed, whose unsuccessful campaign for governor of Michigan gained him a national spotlight last year, also holds pro-Sanders rallies around the country.

Sanders was one of two candidates who spoke at the presidential forum held at the Islamic Society of North America Convention in Texas, where he received a standing ovation from listeners.

But other Democratic candidates have also won over Muslim voters through both their Middle East policy and engagement with Muslim communities. 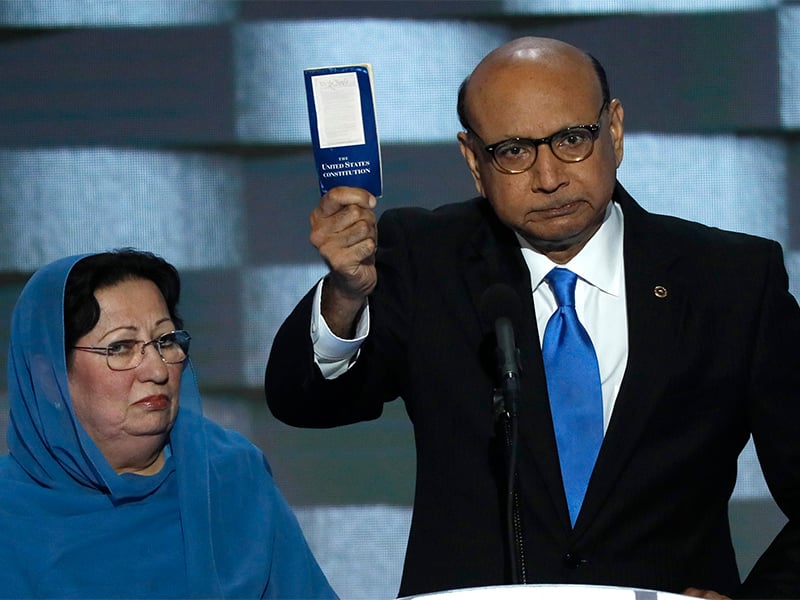 Khizr Khan, right, with wife, Ghazala Khan, whose son Humayun S.M. Khan died serving in the U.S. Army, speaks during the last night of the Democratic National Convention in Philadelphia on July 28, 2016. Photo by Mike Segar/Reuters

Biden has won an endorsement from Khizr Khan, the Gold Star father of U.S. Army Capt. Humayun Khan, who was killed during the Iraq War. Khan has hosted meet-and-greets at mosques and Muslim events around the country as a Biden surrogate, a representative from Biden’s campaign told RNS.

Mary Khalaf, an interfaith advocate in Ogden, Utah, who was once an ardent Trump supporter, now campaigns on behalf of Mayor Pete Buttigieg.

“He has a real natural connection with people of other cultures and he doesn’t demonize Muslims,” Khalaf told RNS. “He sees us as human beings, not as something that’s other and needs to be kept out of America. He speaks Arabic. He’s reasonable, he’s intelligent, he’s calm. … I really like his moral high ground. He’s a person of faith and we shouldn’t discount that.”