(Sightings) — It was breaking news on January 3 when sixteen United Methodists who represent views across the political spectrum of the church released a plan to split the denomination in two. They (with the help of reporting among many media outlets) announced their plan as a notable achievement. But what did they actually achieve?

They produced a plan that proposes to end the impasse in the denomination about human sexuality by having traditionalists leave. But other plans already exist to do that. What they actually did was generate a stunning publicity blitz for a costly schismatic proposal.

It is rare for the mainstream media to pay much attention to internal squabbles within religious organizations, and it was especially remarkable that this one was noticed on a day when the major news sites were dealing with reports that the United States had assassinated one of the highest-ranking military officers of another country at an international airport in a third nation. Yet The Washington Post, The New York Times, CNN, and NPR (plus many local and regional news outlets) deemed it significant to report on a document signed by sixteen self-selected United Methodists.

The “protocol,” as the signers labeled it, was established on December 17, 2019. While it could have been announced before Christmas, the delay until January 3 allowed time for a publicity campaign to be organized to maximize attention right after Christmas.

For the moment, the “protocol” is just a concept paper from the sixteen who signed it. Eight are active United Methodist Bishops — five from the United States (though none is from the Western Jurisdiction) and three from Central Conferences in Africa, Europe, and Asia. Seven of the other eight signatories identify themselves by the caucus groups and advocacy organizations they either lead or represent. The remaining signatory is identified as a clergy person from the Philippines Central Conference. So, of the sixteen, only three are laity. That is astonishing in a denomination whose General, Jurisdictional, Central, and Annual Conference governance bodies are all deliberately designed to have equal numbers of clergy and laity eligible to vote on church matters. 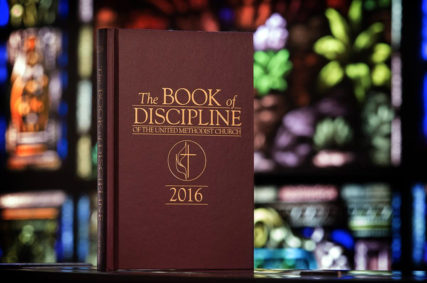 The Book of Discipline contains the rules that guide The United Methodist Church, including its judicial process. Photo by Mike DuBose/UM News

Clearly this “protocol” is a political statement, not a declaration about scripture, Christian mission, holiness or pastoral ministry. It says nothing substantive about the mission of The United Methodist Church, the methods that the Church has defined in its Book of Discipline for interpreting scripture, or the Doctrinal Standards upon which the church is built. The opening clause of the “protocol” acknowledges that the institution and its members “have fundamental differences regarding their understanding and interpretation of Scripture, theology and practice.” But the “protocol” does not seem to care which of those differences align with established church doctrine. It merely mentions “the regional contexts and divergent points of view within the global United Methodist Church” as its political basis. The Bishops identify themselves by their geographical areas. The others omit any reference to local churches or annual conferences of which they are members; the policy positions of their organizations are their priority labels.

Like everything in politics, this proposal rests on compromises. But some truly appalling things have been compromised. The so-called “traditionalists,” who have been able to control the legislative agenda of the denomination through small majorities that enacted restrictive church laws about homosexuality, marriage and ministry, will be paid $25,000,000 to form a new denomination that they already announced they had intended to form and for which they already drafted a book of order. Another $2,000,000 will be placed in escrow for future Methodist denominations to form. “Traditionalists” will also have access to another $39,000,000 from The United Methodist Church to fund specific types of programs, and they will retain access to service on the boards that choose how to allocate the program funds. For decades, “traditionalists” and their allies have held the denomination hostage over legislation on homosexuality. This “protocol” looks like a ransom note.

In effect, what remains of The United Methodist Church after the schism, under this “protocol,” could deliver more than $50,000,000 to new Methodist denominations that might continue advocating discrimination on the basis of human sexuality without having to define the theological, ethical or moral basis on which it will deny the “sacred worth” of all persons.

It is not clear how many among the sixteen signers will have a voice or vote at the 2020 session of the General Conference in Minnesota (May 5–15, 2020). Bishops cannot vote at a General Conference and can speak to that body only if they receive permission from the General Conference to do so. None of the other eight reveals whether she or he will be a delegate to the meeting in May, but their signatures appear to commit that their organizations will not support any other plan for schism or unification except this one.

Some details in it will violate the church Constitution. In addition, the “protocol” makes bold requests and files aggressive claims, insisting that constitutional bodies of the church grant to their “protocol” special privileges. A deadline for sending petitions to the General Conference passed months ago. But the signers of the “protocol” demand that the denomination’s Judicial Council consider any legislation that the sixteen will draft to be the same as if it were a properly proposed petition. The “protocol” also asks the Council of Bishops to persuade committees and boards of the General Conference to make blocks of privileged time available on the agenda for discussion of “protocol” legislation. It asks the Bishops to make privileged time and space available after the General Conference so that “traditionalists” can work on plans for their new denomination. And it asks that the Council of Bishops commit to support a previously submitted proposal for a “Regional Conference” if the terms of the “protocol” are not successfully enacted.

One wonders if a progressive group might arise, ask for similar privileges, and seek equal amounts of funding for some new Methodist denomination of its liking. One wonders if General Conference delegates will support separation but not the payment of ransom. One wonders if United Methodists, including those who signed the “protocol,” increasingly understand that “breaking up [really] is hard to do.”

William B. Lawrence, is a retired clergy member of the North Texas Annual Conference of The United Methodist Church and professor emeritus of American Church history at Perkins School of Theology, Southern Methodist University. (This article originally appeared in Sightings, a publication of the Martin Marty Center for the Public Understanding of Religion at the University of Chicago Divinity School. The views expressed in this commentary do not necessarily represent those of Religion News Service.)