(RNS) — When President Donald Trump leaked, at a rally for evangelical supporters in Florida on Jan. 3, that his administration would issue guidance about prayer in public schools, he started a mini-firestorm, and not just among the fired-up crowd.

When the guidance was released on Thursday (Jan. 16), however, it turned out to be hardly worth the excitement. According to long-settled legal and constitutional protections for religious expression in the public schools, public school students are free to pray, wear religious clothing and accessories and talk about their beliefs. Religious groups can meet on school grounds, and teachers can teach about religion as an academic subject. Religious liberty, in short, is already a treasured value in our nation’s public schools.

So why are the president and White House staffers making inflammatory and misleading statements, claiming our constitutional rights are under attack?

It could be that the administration simply wanted to remind public schools of their constitutional duties. But some comments officials made before and in their announcement of the guidance vastly overstated the supposed problem and echoed the claims of Christian nationalism, a dangerous movement that harms both Christianity and the United States by implying that to be a good American, one must be Christian.

Christian nationalists often point to two Supreme Court cases from the 1960s, Engel v. Vitale and School District of Abington Township v. Schempp, to claim that the government “banned school prayer” or “took God out of the schools.” These are harmful misrepresentations. These cases didn’t ban the free exercise of Christian worship. They banned mandatory Bible readings and prayers written by the government. It should not be controversial to oppose government-dictated religious practice.

Instead of enforcing government-mandated religion, these Supreme Court cases ensured that public school students are free to exercise their constitutionally protected religious beliefs and affirmed the proper way to handle religion in public schools.

And it’s worked: For decades, public schools across the nation have modeled how religiously diverse populations can build relationships of trust and care, respecting the unique role that religion plays in people’s lives. Like our neighbors of all faiths, we are empowered by the First Amendment to live our beliefs in the public square, which includes the public school. 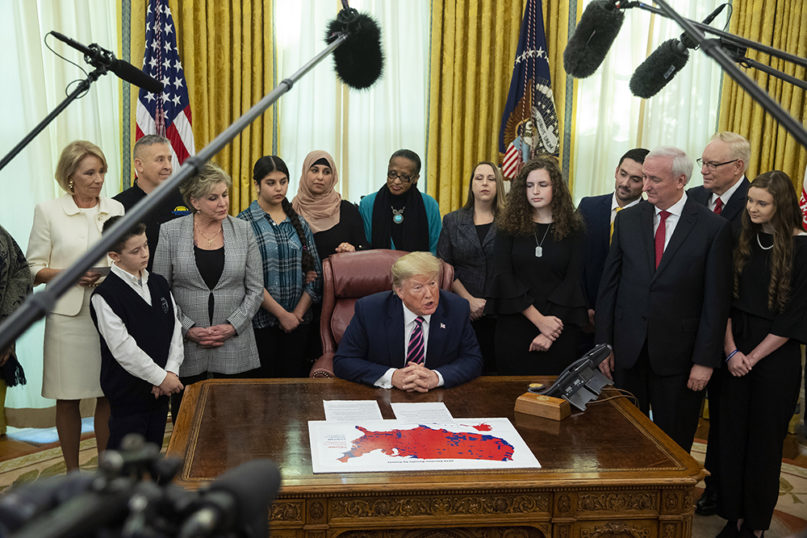 The law cannot anticipate the nuances of every situation that might arise at a given school, and sometimes a misunderstanding or misrepresented incident spurs a call to “bring back prayer” to our schools. In most cases, these misunderstandings simply create an opportunity to reaffirm commonsense guidance and constitutional principles that support voluntary, student-led religious exercise.

But using any incident to institute state-sanctioned prayer, written and delivered by school officials, should be deeply concerning for all Christians. For a Baptist, as I am, voluntary prayer is an important part of my religious practice, and it has been since I was a student in Texas public schools. Why should government schools have a say in how and whether our children pray?

Importantly, ensuring faith freedom for all isn’t only an issue of concern for Christians. If Christian nationalists were able to realize their goal and prioritize Christianity over other traditions in public schools, it is religious minorities who will suffer the most. In our religiously diverse society, why should our schools favor Baptists over Buddhists, Anglicans over atheists, or Methodists over Muslims?

Instead of demanding that a distorted vision of state-sanctioned Christianity be upheld by public schools, Trump should celebrate what public schools already are: a place where religious liberty ensures that Americans can work and learn together across lines of religious difference.

To guarantee religious freedom for students of all faiths and nonreligious students, we must embrace our nation’s constitutional vision that has served us well and push back against the dangerous influence of Christian nationalism.

(Amanda Tyler is executive director of BJC, the Baptist Joint Committee for Religious Liberty, an 84-year-old organization committed to preserving faith freedom for all people. The views expressed in this commentary do not necessarily reflect those of Religion News Service.)

Religion Hub
State funds for students at religious schools? Supreme Court says ‘yes’ in Maine case – but consequences could go beyond
Follow us on Facebook!
Submit your photos to RNS