(RNS) — In this time of remembering Dr. Martin Luther King, we should remember him not as a celebrity but, as he called himself, as a drum major for justice. Dr. King had a dream, but he was much more than a dreamer. He helped transform America, yet he never held a public office nor amassed a great fortune. He was a bold leader, a committed organizer, and he wasn’t tranquil. He forced America to look at hard truths and grim realities that most preferred not to face.

Many people wonder how Dr. King would feel today. The best measure is to look back to what he said and did. He surely would have been pleased at the progress that has been made, the end of legal apartheid. He would see the integrated football and basketball teams, and watch as people cheer the color of the team uniform not the color of the players’ skin, and be cheered. The freedom agenda that he helped to marshal has made great progress.

At the same time Dr. King would surely tell us that the dream was still under attack. Amid islands of hope he would see oceans of despair. He would be amazed by March Madness of the college basketball playoffs, but troubled by graduation sadness after the same athletes dropped out of college. A leader deeply committed to nonviolence, he would be appalled by an America marked by the violence of the attempted assassination of Representative Gabrielle Giffords (one of one hundred thousand injured in gun violence every year) and the deaths of the innocents, Americans killing Americans (about thirty-two thousand killed each year). He would see the reaction — the sale of even more guns — as a sign of our moral incapacity.

Dr. King called for “a true revolution of values,” understanding that the moral world would “look uneasily on the glaring contrast of poverty and wealth.” And, sadly, he would see more people in poverty today than in his years and far more concentration of wealth among the few. 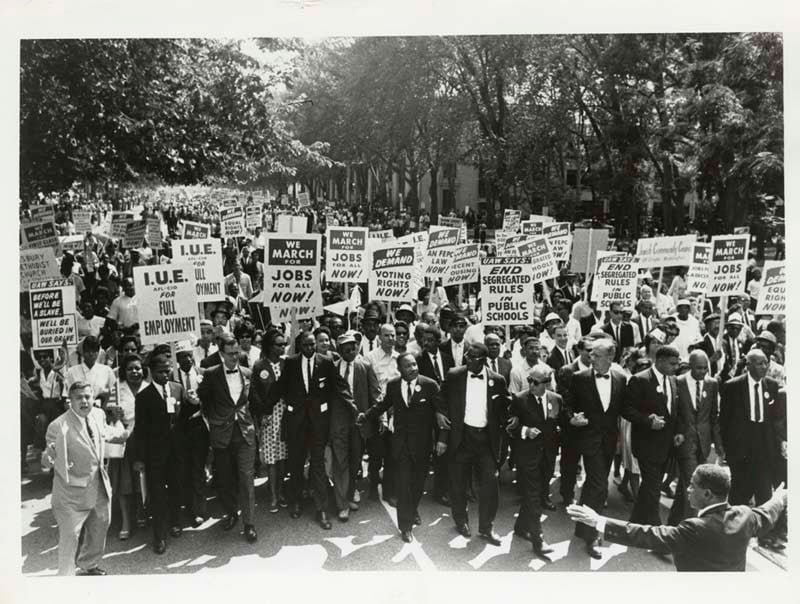 The Rev. Martin Luther King Jr., center, leads the March on Washington for Jobs and Freedom in 1963. Photo courtesy of Center for Jewish History

Dr. King realized that in wealthy America unemployment is both cruel and unnecessary. “There is nothing except shortsightedness to prevent us from guaranteeing an annual minimum and livable income for every American family.” He argued not for welfare but for work: “We must develop a federal program of public works, retraining and jobs for all — so that none, white or black, will have cause to feel threatened.” He would not be satisfied with a Congress that has failed to act while long-term unemployment hits record levels and over twenty million Americans are in need of full-time jobs.

Dr. King publicly opposed the war in Vietnam, understanding that the money for the war on poverty at home was being lost to the war in the jungles overseas. He would be pleased that Americans are overwhelmingly committed to defending Social Security, Medicare, and Medicaid. But he would be alarmed by the cuts now envisioned in programs vital to people, even as we squander an estimated $3 trillion on wars in Iraq and Afghanistan. “Congress,” he reported, “appropriates military funds with alacrity and generosity. It appropriates poverty funds with miserliness and grudging reluctance. The government is emotionally committed to war. It is emotionally hostile to the needs of the poor.” And so he would find it to this day.

Dr. King would recognize the progress that has been made, but he would not be dancing; he would be organizing. “Change,” he taught, “does not roll in on the wheels of inevitability, but comes through continuous struggle.” And he would indict us for our silence in the face of current conditions: “The greatest tragedy of this period of social transition,” he argued, is “not the strident clamor of the bad people, but the appalling silence of the good people.”

To honor his memory, let us end the silence!

Black Protestants
‘Fifth Little Girl’ of 1963 Klan bombing reunites with nurse
Follow us on Facebook!
Submit your photos to RNS