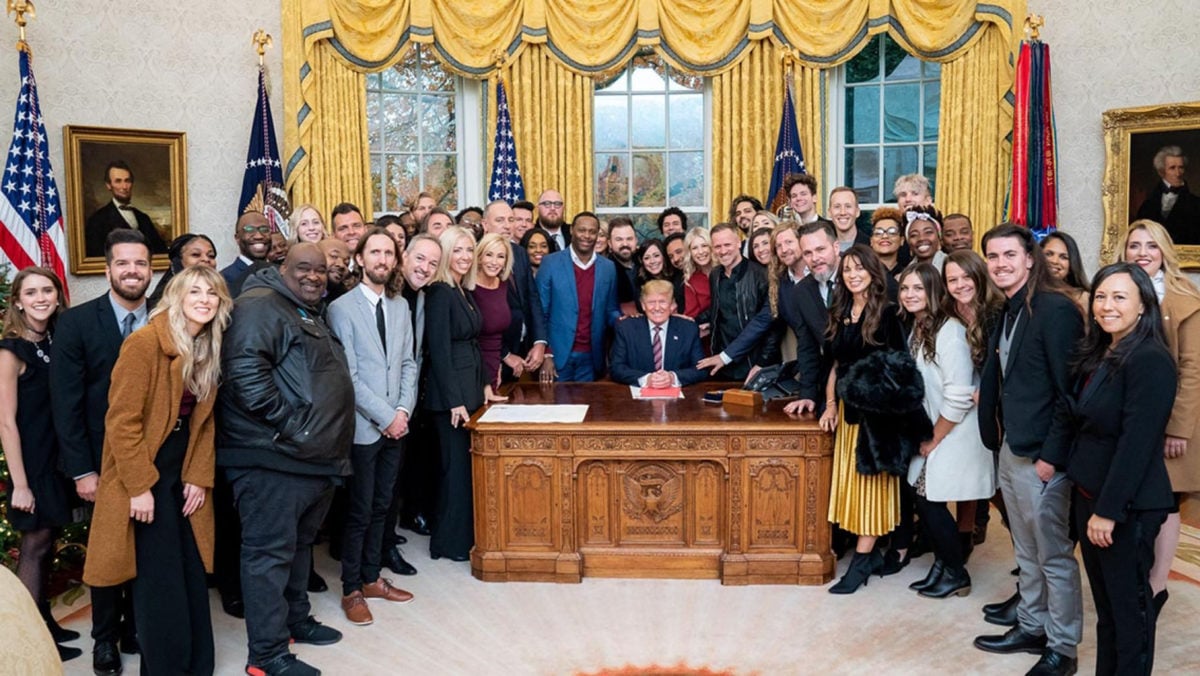 (RNS) — A lot of contemporary worship music doesn’t offer the best theology.  Many of the lyrics focus entirely on going to heaven when we die, rather than reminding us that we have a mission to transform the earth — to bring God’s “kingdom on earth as it is in heaven” — while we are alive. Many songs depict a God who saves us individually from our sins but miss the part about welcoming the stranger, caring for the poor and loving our enemies.

There's a reason for this: Christian worship leaders are among the 81% of white evangelicals who voted for Donald Trump in 2016. Many of them gathered recently at the White House to praise Jesus and bless President Trump. The same folks who are writing worship songs to Jesus line up behind a president whose policies directly contradict the core teachings of Jesus.

So it moved me to tears to hear “Hymn for the 81%," a song by a South Bend, Indiana, worship leader that has gone viral in recent days. A cocktail of prophetic fire and Christ-like grace, Daniel Deitrich's hymn is both a love song to the church and a call to repentance, which castigates the Trump administration for "putting kids in cages, ripping mothers from their babies," but blames the church for failing to rein them in: "I looked to you to speak on their behalf/But all I heard was silence/Or worse you justify it."

It is also a warning to the church: "You weaponized religion and you wonder why I’m leaving to find Jesus on the wrong side of your walls … ”

I talked to Deitrich about his background, the song and what drove him to write it.

Tell us how you got involved in making music.

I grew up in a small farm town in southwest Michigan. I was a pretty shy kid, I’m still an introvert, but my youth pastor taught me three chords on guitar and I’ve been writing songs and playing in bands ever since. For a good eight years, I toured with a band made up of my best friends playing bars and clubs while also leading worship more and more in my church. 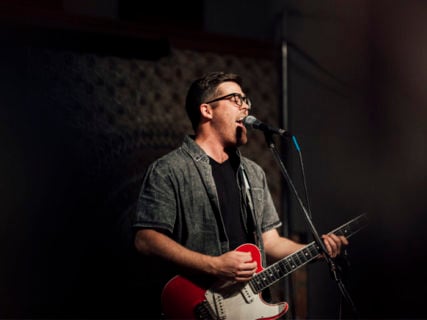 Eventually the band called it quits and I became full-time staff at the church where I grew up, but those honest conversations over post-bar-show beers definitely informed how I approach church and worship music. Like, if church isn’t addressing the questions and struggles that real people are going through, what are we even doing?

About four years ago a friend invited me to help start a new church in South Bend, Indiana. South Bend City Church is a Jesus-centered community for believers and doubters and everyone in between. It’s a place where spiritual exiles have found a home, a place where you don’t have to check your brain at the door, and it’s been so beautiful to see people who have been excluded from or wounded by the church feel safe and seen and loved.

We also think that while the message of Jesus often has political ramifications, it’s not partisan. We want to be a community that transcends political parties, where those that watch CNN or Fox News can worship side by side and be challenged by the teachings of Jesus together.

What do you think is the purpose of worship music?

There’s this great line from a prayer in the old Church of God hymnal that says, “We thank you for music, and for everything that elevates our spirits above the smoggy confusions of our time and gives us hope.” I love that. I’m stuck in the smoggy confusion a lot. Worship music should give us hope — hope that the way of Jesus can bring healing and peace to a hurting world here and now.

Worship music teaches and shapes us, so what we sing about really matters. There are a ton of great songs that help us praise and thank God, but worship music should also help us lament, reflect, confess, celebrate, challenge and push us outside the walls of the church to be the hands and feet of Christ.

The seed for this song has been rumbling around in the back of my mind for a few years now.  In 2016, 81% of white evangelical Christians voted for Donald Trump after, among other things, hearing an audio recording of him bragging about sexually assaulting women.  Even after enacting deliberately cruel policies to rip families apart and put children in cages at the southern border, evangelical support is as fervent as ever.

I was raised in the evangelical world and was taught to take the words of Jesus seriously: Love God, love your neighbor, feed the hungry, fight against injustice. I was taught that things like love, peace, kindness, gentleness and self-control matter. That's why I have been so confused and deeply saddened by the unflinching loyalty to a man who so clearly embodies the opposite of these values.

So this song is a lament and a rebuke, but I hope people hear that it comes from a deep well of love.

Does prayer play a part in the way your songs are born?

Prayer, or at least a posture of listening, eventually brought out the love behind the critique (in this song). Originally I had this big loud bridge that was basically an angry middle finger to the listener. While it was cathartic, it probably wasn’t helpful. The “come home” bridge came late at night in my home studio after my wife and kids were in bed. I remember gearing up for that angry bridge but being hit with a wave of sadness instead. “Come home, you taught me better than this” came out. That’s the take in the finished recording.

What do you hope people will think as they sing it?

This song might ruffle some feathers, but maybe some feathers need to be ruffled. Maybe some tables need to be turned over. Hear me on this, though: It is because I was taught to take the words of Jesus and the prophets seriously that I cannot stay silent.

And look, I'm not perfect and have so much growing and learning to do. I'm not shouting down from my high horse, I'm attempting to repeat the words of Jesus and the prophets even though it might be uncomfortable to hear.

Above all, my hope and prayer is the refrain of this song: May love overcome and justice roll down.

Many people are leaving the church. How do you still believe in it?

Yeah, I keep getting messages responding to this song like, “This is exactly why I left the church.” My friend and teammate Ryan Yazel summed it up really well, saying, “To the evangelical world that raised me, if I am distant from you, it's because you raised me to be distant from what you've now become.” People have had to leave the church to continue following Jesus.

The community that has formed here at South Bend City Church isn’t perfect, and maybe that's not the point, but it’s life-giving and challenging in the best ways. I don’t think I could follow the way of Jesus without the support of those around me or without the practices we return to regularly. We keep discovering that there are more of us out there looking for a community to follow Jesus with.

I wish I didn’t have to write this one! (Laughing.) I suspect it will continue to be necessary, though. There’s so much work to do to combat white supremacy, homophobia, transphobia, sexism — all the ways in which people are treated as less than the children of God that they are.

My music is on all the streaming platforms, but if you’re awesome you can purchase it on iTunes or Bandcamp. Find me on social media under @danieldeitrich.