DURHAM, N.C. (RNS) — On a Friday afternoon, Rabbi Zalman Bluming whizzed through a series of errands in his Honda minivan — dropping off a dozen loaves of challah bread at the hospitality house he helps run a block from the Duke University Hospital, delivering kosher chicken to Jewish patients who will spend the night at the hospital and picking up his kids from the Jewish day school.

His wife, Yehudis, meanwhile, was back at their Chapel Hill home cooking a traditional Shabbat dinner for 50 people, many of them college students.

The Blumings are missionaries, or in their preferred parlance, “emissaries,” to this spot of North Carolina where they have lived for the past 18 years, part of a devout subset of Hasidic Jews who lead a pious, strictly Orthodox lifestyle that prizes family and children.

Despite the rise of anti-Semitic incidents directed at Hasidic Jews, the couple’s calling remains steadfast. As the world marks International Holocaust Remembrance Day, which this year coincides with the 75th anniversary of the liberation of Auschwitz, they put forward a hopeful narrative about America and its future.

“I love this country deeply,” Bluming said. “It’s built on goodness, faith and optimism. That’s the soul of our country and it always will be. It’s our responsibility to care for the moral conscience of the country and the world and to educate them about some of the beauties we take for granted — about the cohesion of the family and raising nurturing souls.”

Unlike the majority of Durham and Chapel Hill’s 11,000 Jews who can easily pass for any other U.S. citizen, the Blumings are especially conspicuous: Zalman sports a beard and a black yarmulke on his head. He wears knotted ritual fringes, or tassels, hanging from the side of his pants. Yehudis wears skirts or dresses and typically covers her hair with a wig.

The couple and their seven children are part of the Chabad-Lubavitch movement of Judaism based in Crown Heights, a neighborhood of New York’s Brooklyn borough.

Chabad equips 2,000 emissary couples across the U.S. These couples work in all 50 states plus Puerto Rico and the U.S. Virgin Islands. In many places, such as South Dakota, which three years ago became the 50th state to have a Chabad emissary, they are the face of Judaism, since there are no other full-time rabbis.

The emissaries live their lives in service to the larger Jewish community. In the case of the Blumings, that means teaching classes on Judaism, mainly to students at the region’s universities, cooking Shabbat meals, leading religious services and providing a raft of other life-cycle rituals. Zalman Bluming is particularly proud of the house of hospitality he helped set up for families of patients undergoing medical treatment at Duke hospital. 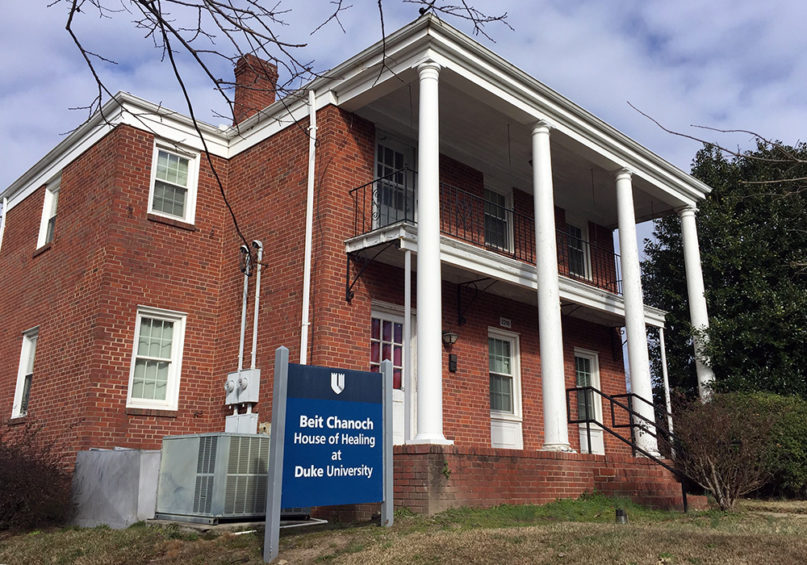 The hospitality house run by Rabbi Zalman Bluming is a block away from Duke University Hospital in Durham, North Carolina. It has four suites with bedrooms for families caring for loved ones in the hospital. RNS photo by Yonat Shimron

So far, the Blumings have not been subjected to the anti-Semitic violence leveled at fellow Hasids. One month ago, five Jews were stabbed at a Monsey, New York, rabbi’s home during a Hanukkah celebration. A few weeks before that, a deadly attack at a kosher supermarket in nearby Jersey City, New Jersey, left six dead, including two Jews.

But the Blumings, who frequently travel to Crown Heights where the Chabad-Lubavitch movement is based, are all too familiar with the parade of insults directed at Hasidic Jews.

“My children have been harassed, on the subways, in the street,” said Bluming. “Inflammatory anti-Semitic statements hurled at them.”

Alongside the deadly incidents, there has been a spate of lesser attacks. Late last year, a man threw a brick through the window of a Hasidic girls’ school in Crown Heights. In Brooklyn’s Borough Park neighborhood, three Hasidic men were punched by assailants. In another incident, eggs were thrown at a group of Hasidic men.

Durham and Chapel Hill have not seen violence, though neither have they altogether escaped anti-Semitism.  Last year, anti-Semitic flyers warning of an “evil Jewish plot” were found at the main library of the University of North Carolina at Chapel Hill. And in 2018, a mural at Duke University created to honor the victims of the 2018 Pittsburgh synagogue shooting was defaced with a swastika.

The Blumings aren’t taking chances. A security camera now hangs above the door of the Blumings’ suburban home. And they have met with local law enforcement, especially police, to make sure they are aware of their particular circumstances.

They won’t say much more, taking their cue from Chabad, which has been tight-lipped about security.

“The very nature of security strategy precludes discussing its details in public, but suffice it to say that we, of course, take it very seriously and work closely with security experts worldwide,” said Rabbi Motti Seligson, a spokesperson for the Chabad-Lubavitch movement.

Zalman Bluming would much rather focus on the good works he’s doing, such as Beit Chanoch — which he runs in partnership with Duke University. Beit Chanoch houses family members for up to a month while critically ill loved ones undergo lung transplants or brain tumor surgery or stem cell therapies at Duke hospital.

The house has four suites and a kosher kitchen. Bluming said he never barges in without an invitation because he wants to give people as much privacy as possible. But he also wants them to know he prays for them daily and is available, should they need him. He will also loan them a car for the time they’re there.

“People come here, they feel very much alone,” said Bluming. “They walk around and don’t know anybody. You want them to know there’s family and people who care about them.”

Serving these families — most of them are Jewish, although the house accommodates Christian and Muslim families, too — is a calling that gives him mission and purpose, he said.

That work will continue regardless of an uptick in anti-Semitic incidents.

“I can’t cure people’s illnesses, but I can lessen the pain and the loneliness they go through and try to be a beacon of light and hope for them,” he said. “That’s the core of what I do.”

Or in the words of his wife, the Blumings’ mission is to put the “J” in “oy.”

Opinion
How a little-known federal land use law could help combat antisemitism in America
Follow us on Facebook!
Submit your photos to RNS