LOS ANGELES (RNS) — All Romell Witherspoon can do is pray and reflect as he prepares for this weekend’s game at Staples Center between the Los Angeles Lakers and the Portland Trail Blazers.

On Friday night (Jan. 31), Witherspoon will be stepping into the downtown Los Angeles arena that fans refer to as “The House that Kobe Built.”

For the past three years, Witherspoon has spiritually guided NBA players as the chaplain for the Lakers. Using Scripture, he helps the team as well as opposing players mentally prepare before home games at Staples.

But this time he knows it will be different.

It’s been four days since Kobe Bryant; his 13-year-old daughter, Gianna; and seven others died Sunday morning in a helicopter crash in the hills above Calabasas, California.

“This is not something that anybody has practice in,” said Witherspoon, 33. “This is a different level, if you will, because the way he (Bryant) impacted each individual personally is different. 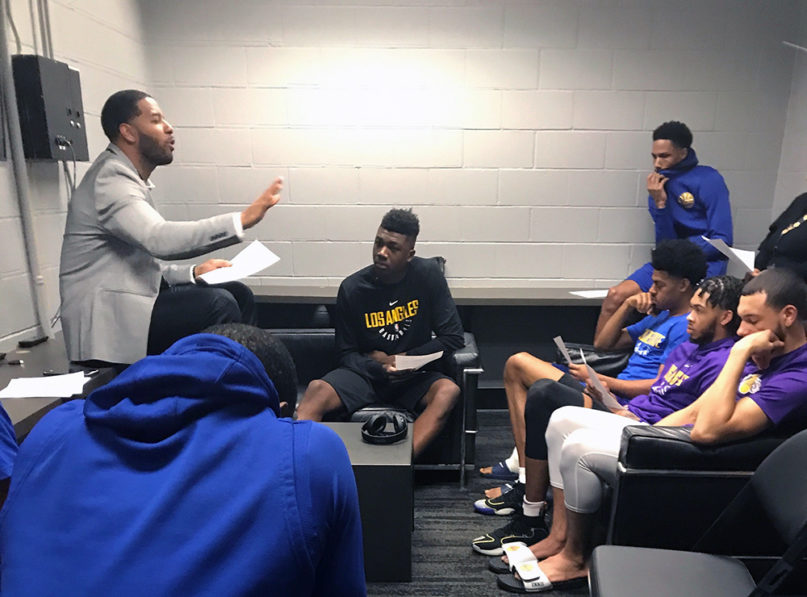 “What I often say is that the presence of trouble does not destroy the potential of triumph,” Witherspoon added. “I think that when you’re in it, it’s very difficult to see the light of day. That’s where my job becomes so important.”

The tributes for Bryant have been pouring in. Outside Staples Center, fans in purple and gold have knelt in tears, shot basketballs into makeshift hoops and in unison have chanted “KO-BE” and “M-V-P.” Murals of the basketball legend and his daughter have popped up across the city. Young athletes, NBA players and other sports stars have shared on social media how Bryant influenced their game and life.

On Instagram, LeBron James posted a photo slideshow of himself and Bryant with the caption, “Please give me the strength from the heavens above and watch over me!”

Witherspoon said he’s been in contact with a number of Lakers players since the crash shook the city and the globe. Some contacted him through text messages. Witherspoon also reached out to players whom he’s established a bond with.

“I just wanted to reinforce the fact that I was present, ready, willing and able to assist in any way that I could,” Witherspoon said.

Witherspoon said Magic Johnson hired him as team chaplain after Witherspoon participated with the former Lakers president of basketball operations in a panel at West Angeles Church. 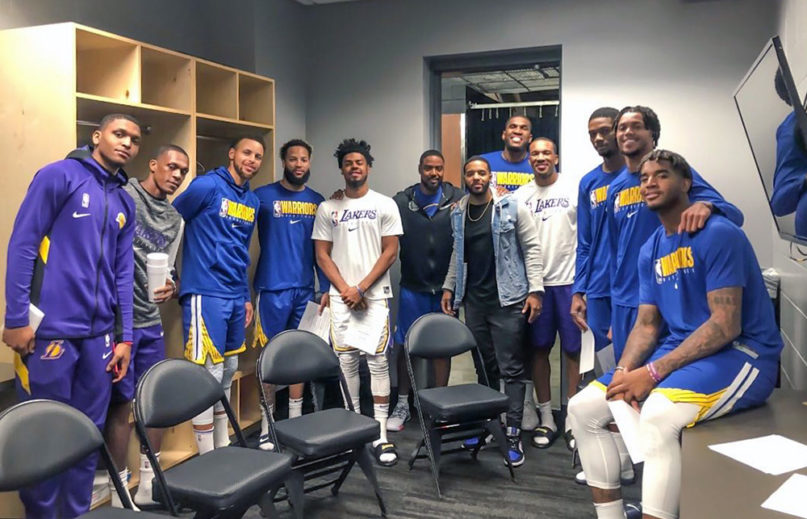 Lakers team chaplain Romell Witherspoon, center in jean jacket, poses for a photo with players from the Lakers and the Warriors in Oct. 2019, at Staples Center in Los Angeles. Photo courtesy of Romell Witherspoon

“The team was young and he thought it would be very beneficial to be able to speak the players’ language,” Witherspoon said.

As chaplain, Witherspoon performs ministerial duties apart from a parish. On average, about 15 people — including players from both the home and opposing teams and other staff members — gather for a session with Witherspoon before games.

Witherspoon did not personally meet Bryant since he began his chaplaincy just after the 18-time NBA All-Star retired in 2016. Earlier this week, Witherspoon shared an image of Bryant beside a quote that said, “There can be nothing more consoling to those who mourn than to know that a loved one worshipped God right before his death.”

Death is stunningly final. Nothing can prepare us for the departure of a loved one or one we significantly admire and respect. But the challenges of life are won and lost in the trenches of your faith. Hold fast to this👇🏽👇🏽👇🏽👇🏽 Isaiah 43:2 “When you pass through the waters, I will be with you; and when you pass through the rivers, they will not sweep over you. When you walk through the fire, you will not be burned; the flames will not set you ablaze.” No matter how aggressive this unfortunate tragedy may attempt to consume you, God will never leave you nor forsake you. No level of adversity will overwhelm you. Trust God in a low place, and he will in turn trust you in a high place. Confidence in Christ is the key, but FAITH unlocks the door. ***** To everyone that fell victim, all the families and loved ones affected in this tragedy, my prayer are with you. Let this comfort you….TO BE ABSENT IN THE BODY, IS TO BE PRESENT WITH THE LORD. Heavens gates received some fire power! @lakers we are all in a position of support! Because of how close this tragedy is to home I'm sending a special prayer up to my guys @kingjames @qcook323 @caldwellpope @acfresh21 @boogiecousins @troydaniels30 @antdavis23 @greenranger14 @dwighthoward @kuz @rajonrondo @javalemcgee @5talen @magicjohnson Avery Bradley!

Bryant, on the morning of the crash, was seen praying inside Our Lady Queen of Angels in Newport Beach before the 7 a.m. Mass, according to Angelus News, a media platform launched by the Archdiocese of Los Angeles.

In a Facebook post Monday, Bishop Timothy Freyer of the Diocese of Orange said Bryant was a committed Catholic who was a parishioner in its diocese.

“Kobe would frequently attend Mass and sit in the back of the church so that his presence would not distract people from focusing on Christ’s Presence,” he said.

Catholic news sites and other media outlets have reported that a priest helped Bryant deal with a sexual assault charge he faced in 2003-04.

Bryant in 2003 was accused of raping a 19-year-old employee at a Colorado resort. He said the two had consensual sex, and prosecutors later dropped the felony sexual assault charge against Bryant at the request of the accuser. The woman then filed a civil suit against Bryant that was settled out of court. Bryant later issued an apology.

“Was I afraid of going to jail? Yes. It was twenty-five to life, man. I was terrified. The one thing that really helped me during that process — I’m Catholic, I grew up Catholic, my kids are Catholic — was talking to a priest,” Bryant told GQ in a 2015 article. Fans play toy basketball at a memorial for Kobe Bryant near Staples Center Tuesday, Jan. 28, 2020, in Los Angeles. Bryant, the 18-time NBA All-Star who won five championships and became one of the greatest basketball players of his generation during a 20-year career with the Los Angeles Lakers, died in a helicopter crash Sunday. (AP Photo/Ringo H.W. Chiu)

These series of events have been highlighted as fans mourn and celebrate the life of Bryant, who also won a Best Animated Short Film Oscar for his movie “Dear Basketball” in 2018. But that same year, he was dropped from an animation film festival jury after an online protest emerged over the 2003 rape allegation. Bryant said he was focused on changing the world “through diverse stories, characters and leadership.”

For now, Witherspoon is reminded of Scripture, John 12:24: “Truly, I say to you, unless a grain of wheat falls into the earth and dies, it remains alone; but if it dies, it bears much fruit.”

“I think that on the back of Kobe Bryant a lot of lives will be saved, and changed and relationships rearranged,” Witherspoon said.

“Now he lives within us,” he added.