(RNS) — Do the current Democratic candidates for president have any chance of winning evangelicals in November 2020?

Of the candidates left in the Democratic primary race, Pete Buttigieg has made the most of his Christian faith. Buttigieg regularly quotes the Bible on the campaign trail and is always ready to remind us that the Christian right does not have a monopoly on the language of faith.

But for many evangelicals, Buttigieg’s Bible-infused sermonettes seem indistinguishable from the usual Democratic talking points. One wonders if there is anything about his understanding of Christianity that would put him at odds with party orthodoxy.

Over the last couple of years, I have talked with a lot of Trump-voting evangelicals. Some go to my church. Some are in my family. We have exchanged emails and social media messages. I met many of them during the tour for my book “Believe Me: The Evangelical Road to Donald Trump.”

“Believe Me: The Evangelical Road to Donald Trump” by John Fea. Courtesy image

These evangelicals might vote for a Democratic candidate who speaks in genuine and sincere ways about reducing the number of abortions in America. Ideally, this candidate would support the Hyde Amendment, the legislative provision that prevents the government from using federal funds to pay for most abortions.

Evangelicals might also consider voting for a Democratic candidate who recognizes legitimate threats to religious liberty. Such a candidate might be willing to endorse the Fairness for All Act, a bill that both outlaws discrimination against the LGBTQ community and protects the convictions of faith-based institutions.

Perhaps this candidate might embrace something akin to what Washington University law professor John Inazu calls “confident pluralism.” Inazu calls both the left and the right to think more deeply about how Americans can live together amid their deepest differences and, in the process, forge a healthy republic defined by “tolerance, humility, and patience.”

If a candidate will speak proactively on these issues, he or she just might steal a small number of evangelical votes away from Trump. In another close election, such votes may be all that is needed to defeat the president in 2020.

Unfortunately, no such candidate exists in the Democratic field.

The Democratic candidates seem to be taking the same route Hillary Clinton took in 2016. The candidate who spoke openly about her faith during the 2008 Democratic primary battle against Barack Obama, and made visits to Messiah College and evangelical celebrity Rick Warren’s California megachurch, seemed tone-deaf on matters important to evangelicals eight years later.

During the Democratic primaries in July of 2015, when a conservative pro-life group published videos showing Planned Parenthood employees discussing the purchase of body parts and the fetal tissue of aborted fetuses, Clinton said, “I have seen the pictures (from the videos) and obviously find them very disturbing.” Such a response, reiterated a year later, could have helped her reach evangelicals who also found these videos disturbing. 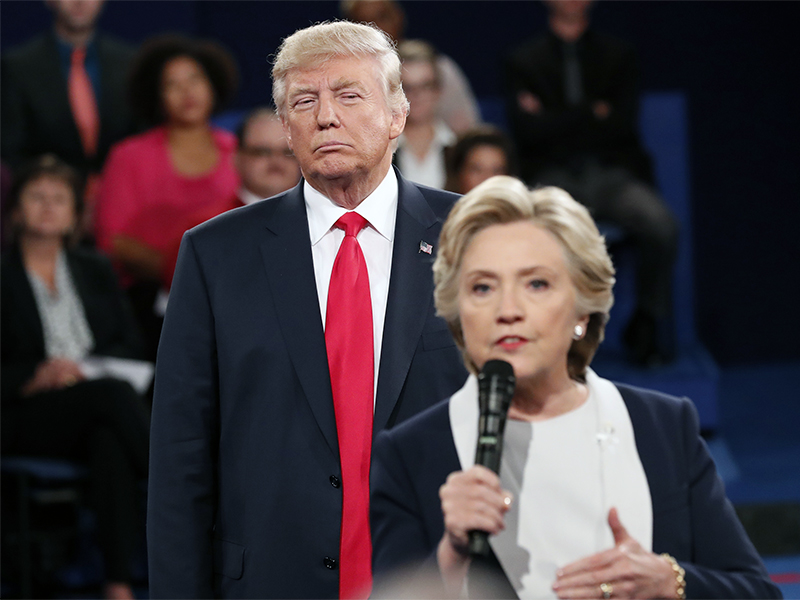 But during the general campaign Clinton showed little ambivalence about abortion, or any understanding that this practice might raise ethical questions. During the third presidential debate, she defended a traditional pro-choice position and seemed to dodge Fox News host Chris Wallace’s question about her support for late-term abortions.

Clinton was also quiet on matters pertaining to religious liberty. While paying lip service to the idea whenever Trump made comments about barring Muslims from coming into the country, she never addressed the religious liberty issues facing many evangelicals.

This was especially the case with marriage. Granted, evangelicals should not have expected Clinton to defend traditional marriage or promise to help overturn the Supreme Court’s decision in Obergefell v. Hodges to legalize same-sex marriage. But she seemed unwilling to support anything close to a confident pluralism that respected the religious liberty of those who believe marriage is a union between a man and a woman.

When Clinton claimed that her candidacy was a candidacy for “all Americans,” it seemed like an attempt to reach her base, not to reach across the aisle. Conservative evangelicals were not buying it.
The question of how to make room for people with religiously motivated beliefs that run contrary to the ruling of Obergefell is still being worked out, and the question is not an easy one to parse.
As we enter the 2020 primary season, it doesn’t make much political sense for Democratic candidates to keep quoting the Bible if they are going to ignore evangelical concerns about abortion and religious liberty. They should just simply try to win the election without evangelicals.
Let’s remember that such a strategy almost worked in 2016. Clinton won the popular vote by 3 million.
(John Fea teaches American history at Messiah College in Mechanicsburg, Pennsylvania.  He is the author of “Believe Me: The Evangelical Road to Donald Trump.” The views expressed in this commentary do not necessarily reflect those of Religion News Service.)
Share
Tweet
Share

Spiritual Politics
Running on ‘Stop the Steal,’ the GOP goes all in on presidential sedevacantism
Follow us on Facebook!
Submit your photos to RNS