In 2017, Barbarin was charged and later convicted for not reporting the abuse of a minor, which resulted in a six-month prison sentence. His was the most high-profile case of a member of the Catholic hierarchy to be tried and sentenced for sexual abuse coverup.

The prosecutors accused Barbarin of not reporting the notorious pedophile Bernard Preynat, who was convicted in July for sexually abusing up to 45 young Boy Scouts under his care in the diocese of Lyon. The Catholic Church removed him from the clerical state, meaning Preynat is no longer a priest.

Lyon is an important diocese in France, overseeing more than 1.2 million Catholics, and traditionally a stepping stone for becoming a cardinal and occupying other prestigious positions.

The victims who accused Barbarin of covering up abuse plan to appeal the matter to France’s highest court, the Court de Cassation. Victims may also present the case before the European Court of Human Rights. In either case, a final decision over Barbarin’s guilt or innocence may not be made for several years.

At the time of his conviction, the 69-year-old Barbarin presented his resignation to Pope Francis even though the cardinal hadn’t reached the retirement age of 75. Francis refused the resignation due to the “presumption of innocence,” but in June he appointed Bishop Emeritus Michel Dubost of Evry-Corbeil-Essonnes to oversee the diocese while Barbarin maintained the title of Archbishop of Lyon.

Despite being acquitted, Barbarin said he presented his resignation once more to the pope, who has the last word in these cases.

“For the Church in Lyon, it’s time to open a new chapter,” the cardinal told French reporters after his court hearing. “Once again I will present my resignation as archbishop of Lyon in the hands of Pope Francis.”

Vatican spokesman Matteo Bruni stated on Thursday that the Vatican and the French bishops “reaffirm their closeness to all the victims of abuse, in their suffering, and to their families and communities.”

“The Holy Father, who continues to follow closely the unfolding of these painful events, will communicate his decision at the appropriate time,” he said.

In a tweet, Cardinal Robert Sarah, who heads the Vatican Congregation for Divine Worship, said that he greeted the news of Barbarin’s acquittal with “emotion.”

“We have long awaited this important day with him. Our friendship never wavered. He has always been a great servant (of God),” he wrote. 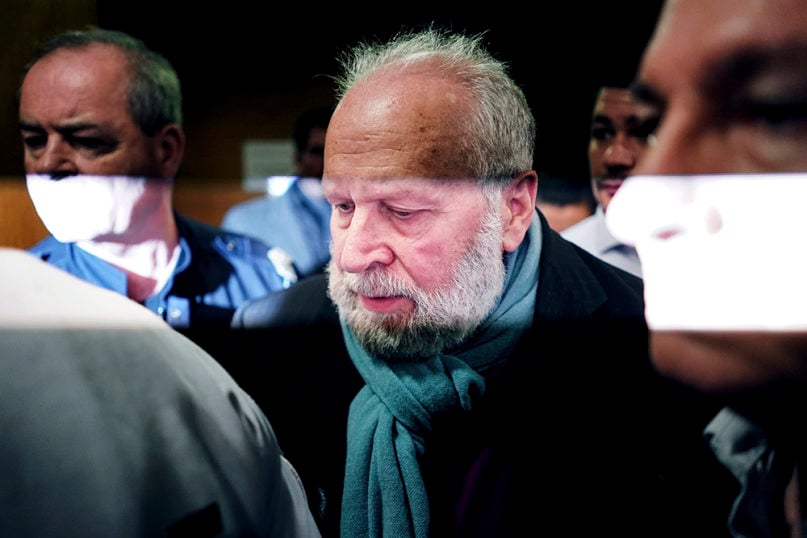 A camera flash lights up part of former French priest Bernard Preynat, center, as he arrives at the Lyon court house, central France, Monday, Jan. 13, 2020. Preynat, who is accused of sexually abusing dozens of Boy Scouts, went on trial Monday. Preynat admitted in the 1990s to abusing boys but was only removed from the priesthood last year. (AP Photo/Laurent Cipriani)

The charges against the cardinal haven taken place amidst great upheaval in the French Catholic church and society.

The papal representative to France, Archbishop Luigi Ventura, has been under investigation for allegedly groping people. The Vatican, in a rare move, lifted the prelate’s diplomatic immunity, which would have insulated him from such an investigation.

The emergence of cases of sexual abuse by clergy led the French bishops to create a commission in June 2019 to study current and historic abuse cases involving clergy in the country. A majority of the episcopacy agreed to pay compensation for abuse victims in their diocese.

France also has been coming to terms with its lackadaisical approach toward the protection of minors well beyond the confines of the Catholic Church. Acclaimed author Gabriel Matzneff has come under fire after a woman came forward accusing him of sexually abusing her when she was a child.

Matzneff’s interest in underage girls was well-known. In his book, “Under 16 Years Old,” he wrote that “to sleep with a child, it’s a holy experience, a baptismal event, a sacred adventure.” Since the accusations in late December he has fled to Italy.

The prolific Director Roman Polanski, who left the United States to avoid sentencing for raping a 13-year-old girl, found a new home in France where he continues to make movies and win nominations for prestigious awards.

Following France’s sexual revolution of 1968, a powerful lobby of individuals began to form that viewed pedophilia as a sexual orientation and objected to the idea that children are not able to willfully partake in a sexual experience.

Despite attempts to change the law in France, prosecutors must prove sex with someone under 15 was forced in order to bring rape charges.