LOS ANGELES (RNS) — Aztec dancers knelt, swirled and stomped on the street. Others pounded drums and sounded shell trumpets. A woman held an incense burner above her, pointed it toward the sky and shook it in all directions around her.

On a recent Sunday afternoon, more than 100 people gathered in a northeast Los Angeles intersection to honor what some refer to as the neighborhood’s most sacred mural.

Titled “Mexico-Tenochtitlan: The Wall That Talks,” the mural fuses Aztec, Mayan and Native American images in unity with one another. Quetzalcoatl, the feathered serpent deity of Mesoamerican culture, winds his way through cultural icons like the Virgin Mary, the patron saint of Mexico; the Aztec calendar; and Cesar Chavez, who led the farmworker movement in the ’60s. 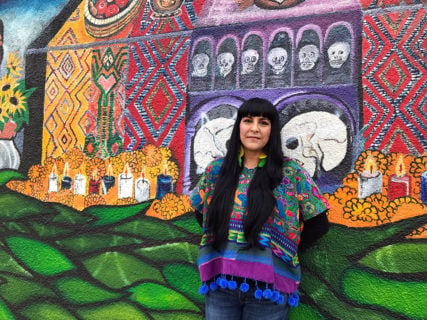 Brenda Perez created the Restorative Justice for the Arts project to help restore and preserve murals and sacred imagery around the area. RNS photo by Alejandra Molina

“These murals help us connect to our past and present,” said Brenda Perez, who grew up in this neighborhood of Highland Park.

That’s why Aztec dancers and healers assembled on Jan. 26 on Figueroa Street and Avenue 61, to bless and protect the mural after word spread about plans to build windows on that particular wall. The mural is on the outside of a building that, in August 2019, sold for $5.8 million, property records show. The space is tied to a limited liability company, Fig Crossing LLC.

The ceremony, Perez said, was a way to invoke “ancestral protection” for the mural, despite a statement from Fig Crossing that said it had no plans to “erase, paint over, alter the mural or demolish the wall.”

In the statement, Fig Crossing said certain declarations surrounding the building and the company’s intentions with the mural have been “false and inflammatory.”

“We are committed to being thoughtful, transparent neighbors to this vibrant community,” the statement read.

Perez said the community will not be satisfied until the company signs a legally binding document that confirms its commitment to keep the mural intact. Fig Crossing could not be reached for comment about its plans for the building. 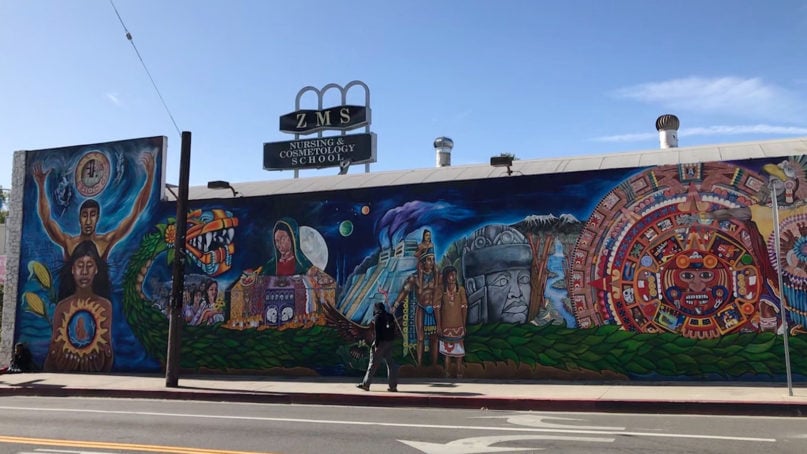 Conrado TerrazasCross, a spokesperson for City Councilman Gil Cedillo, said murals in the neighborhood’s historical area cannot be removed without approval. “The Wall That Talks” is in an area covered by the Highland Park-Garvanza Historic Overlay Zone, he said. The city intervened after hearing of Fig Crossing’s rumored plans to build windows on the wall, TerrazasCross said.

To Perez, the whitewashing of murals is part of a larger problem in Highland Park, which has been described as one of the most gentrifying LA neighborhoods. She has seen murals completely painted over to cover graffiti, instead of having the artwork restored. Some murals, she said, have disappeared after new businesses occupy neighborhood buildings. Perez said artwork that’s registered to the Los Angeles Department of Cultural Affairs has also been illegally removed.

Historically, murals and street art on the walls of Highland Park businesses have paid homage to the area’s Chicano identity and Latino culture. Images of the Virgin Mary, ice cream street vendors and lowrider cars have embellished storefronts across the neighborhood. 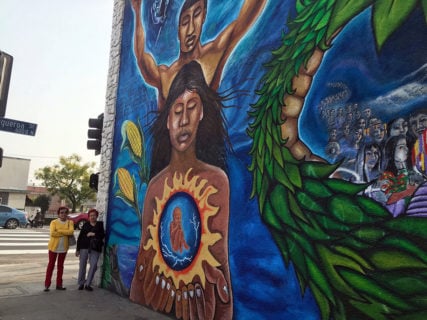 Women stand beside a mural in the Highland Park neighborhood of Los Angeles and watch a group blessing it on Jan. 26, 2020. RNS photo by Alejandra Molina

Perez created the Restorative Justice for the Arts project to help restore and preserve murals and sacred imagery around the area. The way Perez sees it, she and her neighbors look through murals as “windows into the spiritual landscape.”

As a doctoral candidate in psychology, Perez researches how sacred indigenous symbols and community art can help heal trauma and resist discrimination. She decided to focus on this topic when she realized how emotional she and other residents felt when certain community artwork disappeared.

She recalled a Virgin Mary image on a liquor store wall that was painted over.

“When murals with her image are whitewashed, it’s a sacrilegious act,” she said. “That’s something that everyone must respect because it’s a culture.”

Artist John Zender Estrada said some of his art has been removed.

One mural, “Resist Violence With Peace,” featured an Aztec warrior surrounded by eagles and was painted over a few years ago. He completed it in 1993, in the wake of the LA riots. Zender Estrada said he assumed his mural was protected under a city ordinance that considered artwork created before October 2013 as “vintage original art murals.”

He recalled real estate developers assuring him the mural would remain in place despite construction of an art studio and restaurant. However, that was not the case. TerrazasCross did not immediately know how that mural was removed.

Zender Estrada is also one of the artists who created “The Wall That Talks” mural. He helped paint a brown-skinned Adam and Eve, with Adam opening up his arms as Eve holds a radiating sun with an image of a fetus. He said the artwork depicts “giving birth to creation.”

To Zender Estrada, the sacredness of these murals depends on the community. Participants wear indigenous attire during a mural blessing on Jan. 26, 2020, in the Highland Park neighborhood of Los Angeles. RNS photo by Alejandra Molina

He said he expects his artwork to be removed in industrial areas because “there is no one to speak up for it.” But if residents of a neighborhood find their art important and sacred, they should “stand together” and bring “awareness of it,” he said.

Zender Estrada said it was a noble act for residents to unite in the mural blessing.

“If the community doesn’t speak up for the mural, it’s almost like leaving a child abandoned in the street,” he said.

“There should be more events like that, for every mural in the communities of Los Angeles,” Zender Estrada added. 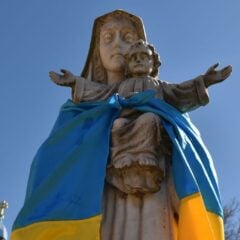