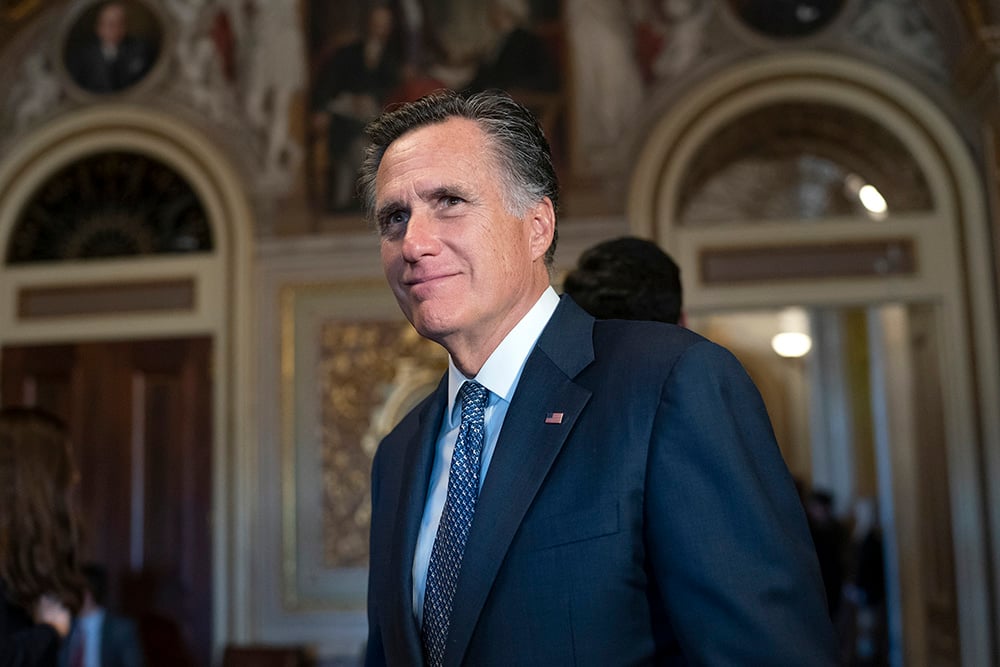 Sen. Mitt Romney, R-Utah, pauses as he speaks to a reporter outside the Senate chamber during a break in President Donald Trump's impeachment trial, at the Capitol in Washington, on Jan. 29, 2020. (AP Photo/J. Scott Applewhite)
February 6, 2020
Mark Silk

(RNS) — There is evidence that Americans respond positively to a politician who explains taking a difficult position by citing personal religious conviction.

Running for governor of Virginia in 2005, Tim Kaine, who is Catholic, explained his principled opposition to the death penalty by citing his church’s teaching against capital punishment (while at the same time pledging to uphold state law permitting executions). His Republican opponent, Jerry Kilgore, seized on the issue, running an attack ad that accused Kaine of saying “Hitler doesn’t qualify for the death penalty.”

Virginia voters, redder then than they are now, nevertheless did not bite. As The Wall Street Journal put it after Kaine won the election, “Mr. Kilgore’s nonstop death-penalty demagoguery might have backfired with social conservatives who saw a man being attacked for his religious beliefs.”

Which brings us to Mitt Romney’s citation of his religious faith in explaining his decision to vote to impeach President Donald Trump.

“I am profoundly religious,” Romney declared in his speech on the Senate floor. “My faith is at the heart of who I am. I take an oath before God as enormously consequential.”

Anyone who has followed Romney's career knows this to be the case. A scion of a leading family in The Church of Jesus Christ of Latter-day Saints, he served as bishop (Mormon pastor) of his Massachusetts ward while he was a businessman in Boston. (See this account by one of his counselors at the time.)

When running for the GOP presidential 2008 nomination, Romney was at some pains to talk about his faith, acknowledging the party’s evangelical base was distinctly lukewarm to the idea of a Mormon standard-bearer.

The speech he made in December of 2007, in conscious imitation of John F. Kennedy’s speech to the Protestant ministers of Houston in 1960, included a bold critique of the country’s history of persecuting religious dissenters, including his own religious forebears.

“Americans were unable to accommodate their commitment to their own faith with an appreciation for the convictions of others to different faiths,” he said. 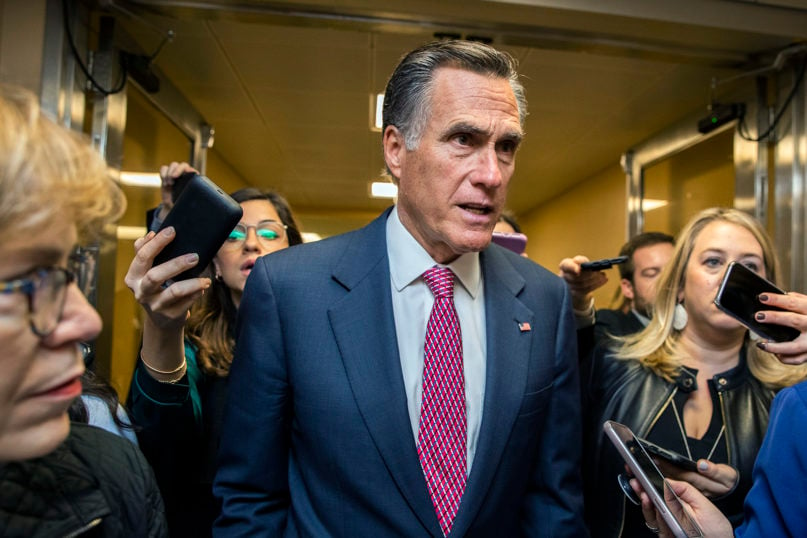 Sen. Mitt Romney, R-Utah, speaks to reporters as he arrives at the Capitol in Washington on Jan. 27, 2020, during the impeachment trial of President Donald Trump on charges of abuse of power and obstruction of Congress. (AP Photo/Manuel Balce Ceneta)

To be sure, Romney has sometimes seemed to be a straw in the political wind. Perhaps the most notorious case in point was his opposition to Obamacare, which was nothing other than a national version of the health care plan he instituted while governor of Massachusetts.

In an interview this week with Mark Leibovich of The New York Times, he expressed regret for having on occasion allowed calculations of “political benefit” to lead him to do the wrong thing.

It is hard to imagine anyone who listened to that interview and watched his Senate speech coming to the conclusion that Romney was guilty of bad faith — anyone, that is, except a dyed-in-the-wool partisan of Trump. That his fellow Republican senators have so far refrained from criticizing him is telling.

If there is something in his own religious tradition that helped Romney find the courage to break with his party, it may be the idea that the Constitution was divinely inspired — which he referred to explicitly on the Senate floor, saying, “I believe that our Constitution was inspired by Providence.”

Constitutional faith may be on the wane elsewhere, but, it seems, not in The Church of Jesus Christ of Latter-day Saints.

That said, Romney’s case for impeaching the president was not religiously particularistic in the way Kaine’s case for opposing the death penalty was. In the course of the Trump impeachment proceedings, there was no shortage of declarations of the sacredness of their oath of office from senators of different faiths, on both sides of the aisle.

Acknowledging he would be on the receiving end of disapproval, denunciation and abuse for what he was about to do, Romney asked his colleagues, “Does anyone seriously believe that I would consent to these consequences other than from an inescapable conviction that my oath before God demanded it of me?”

Does anyone seriously believe that all of his fellow Republican senators considered their oath before God to be as demanding?