VATICAN CITY (RNS) — While the newly elected Pope John Paul II stood before Catholic cardinals in the Sistine Chapel on the 16th of October 1978, half a world away in Argentina a middle-aged priest named Jorge Mario Bergoglio was following the election on the radio of his car.

In that moment began a connection between the Polish pontiff and the man who would later become his successor as Pope Francis.

It is this historical moment that opens a new book by the Rev. Luigi Maria Epicoco, in which the Italian priest interviews Francis about his predecessor, finding continuity instead of rupture.

The book, titled “St. John Paul the Great,” was released in Italy on Tuesday (Feb. 11) in honor of the 100th anniversary of the birth of St. John Paul II. It is already being translated into several languages, including English.

Francis “recognizes John Paul II to be an extraordinary figure of a pope, a saint,” Epicoco said in an interview with Religion News Service on Tuesday.

John Paul II was the pope who promoted Bergoglio from priest to auxiliary bishop, from archbishop to cardinal, allowing him to become eligible — and then elected — to the papacy in the 2013 conclave. In turn, Francis placed a halo on Pope John Paul II’s head in 2014, making him a saint.

The book was the result of an informal conversation between Epicoco and Pope Francis, who had shown interest in the works of the young priest, teacher and theologian from the Italian Diocese of Aquila. Epicoco’s book on the importance of fatherhood in contemporary society, “Telemachus Wasn’t Wrong,” was much appreciated by the pontiff, he said.

During a meeting with Francis in June 2019, Epicoco voiced his intention to write a “spiritual biography” of John Paul II and was so taken by Francis’ personal anecdotes and stories of the pope that Epicoco suggested the idea of interviewing him on his predecessor.

“We told the story of John Paul II through the eyes of Pope Francis,” the priest said, adding that the book touches on many subjects dear to both pontiffs. 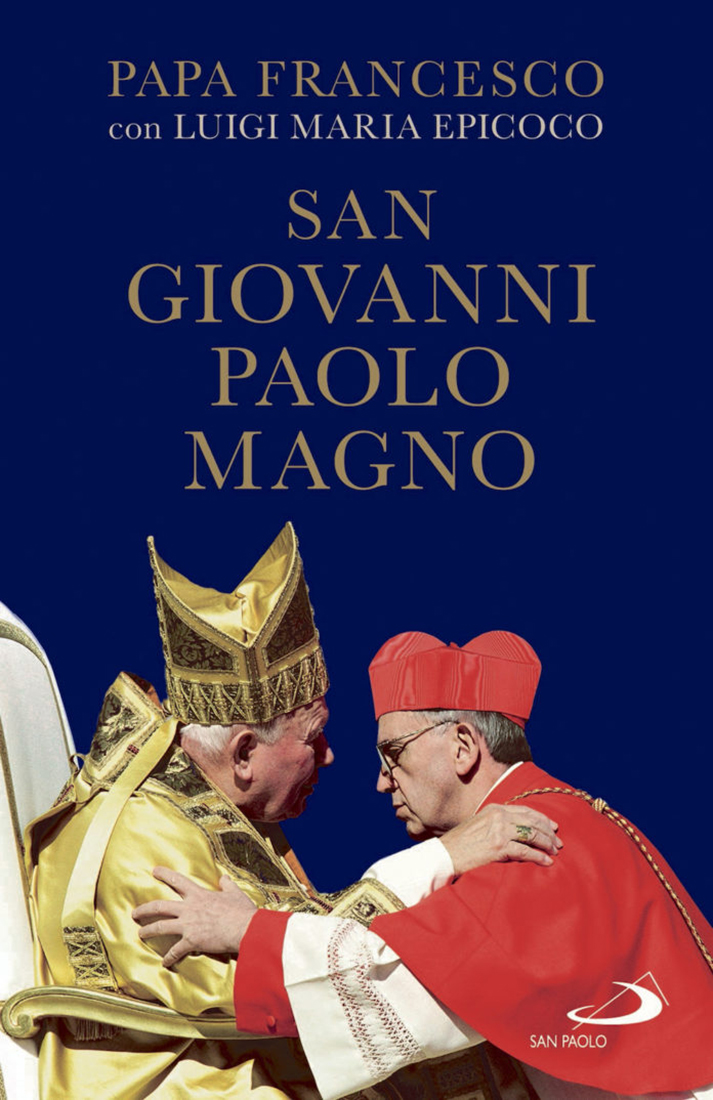 Among the topics discussed in the text are some of the thorniest facing the Catholic Church at this moment. These include the ordination of women, gender theory and the importance of priestly celibacy.

The latter has been a particularly hot-button issue since the last gathering of bishops, in October, which addressed the possibility of ordaining tested married men in remote areas where there is a shortage of priests.

Since then, the Vatican has made concerted efforts to reduce expectations for any changes in the church’s rules about celibacy. Notable figures in the Catholic Church, including the now retired Pope Benedict XVI, have spoken out in defense of celibacy, and Pope Francis has told bishops from the U.S. visiting Rome that he doesn’t “think the Holy Spirit is working on that now.”

This book, released only one day ahead of Francis’ final document resulting from the synod of bishops, seems to align with rumors the pope has taken a step back from the issue.

“I am convinced that celibacy is a gift, a grace, and walking along the path of Paul VI and then John Paul II and Benedict XVI, I feel strongly the need to think about celibacy as a decisive grace that characterizes the Roman Catholic Church,” Francis said in the book.

The Argentine pope delivered once more a clear “no” to the ordination of women, adding that the position John Paul II held makes it clear “the question is no longer under discussion.”

Another position on which the pope and his predecessor are in agreement is gender theory, which was initially shut down by John Paul II and then opposed by Francis. His opposition stems from the belief that gender theory’s attempt to make everyone “homogenous, neutral” is an “attack on God, to man and to woman.”

Making a comparison to the tower of Babel in the Bible, which “eliminated diversity to find in this annulment a single language, a single form, a single people,” Francis warned “this apparent uniformity led them to self-destruction.”

“In gender (theory),” the pope said, “one can see how an idea wishes to impose itself on reality and it does so subtly.”

Epicoco clarified that the book was written before many of these topics emerged in the news and that Francis asked to review the text, especially regarding gender, many times. He also said when Francis discusses gender theory, he doesn’t mean sexual orientation, adding the pope said “the church has the duty of accompanying homosexuals.”

“If we abolish differences then we will remove the most profound and true dignity of people,” Epicoco said, “and this is diabolical, according to the pope.”

A comparison between John Paul II and Pope Francis meets resistance among some Catholic faithful who believe the first, known for his conservative ideology and Curia, is incompatible with Francis’ progressive line on society, economy and teaching.

“This juxtaposition is born from a secular view of the church, in the sense of thinking about the church as you would any other reality,” Epicoco said, adding that such “sociological and political outlooks can capture many interesting points, but not the most important.”

In the book, Francis tells of how he was snubbed by many in Argentina for being a conservative because he defended the magisterium of John Paul II. This points to a deeper understanding of the Catholic Church, beyond division and politics, the priest said.

“What holds the church together isn’t the fact that we all agree, but a word that many have forgotten: communion,” he said, where “different parts collaborate for the good.”

This doesn’t mean there isn’t a difference in style between the two popes, Epicoco admitted, in large part due to the very different historical context. While John Paul addressed the ideologies of communism and capitalism at the height of the Cold War, Francis is faced with the challenges of globalization.

John Paul “had the courage to say that at the center of the utilitarian economy there must be the human being and not profit, which Pope Francis considered to be a prophetic idea that he tried to bring forward.”