They also don’t want to punish anybody, said Eckery, a communications consultant.

But — whether they wanted it or not — a culture war might be upon them.

It has been more than four years since the Missionary Guadalupanas of the Holy Spirit first began their legal battle against California’s requirement that insurance plans cover abortions. For the most part, the sisters had hit brick walls and disappointments — until last month, when the Trump administration brought attention to their efforts and the state’s response.

In a Jan. 24 notice, the administration threatened to cut off federal health care funding if California didn’t comply with a law known as the Weldon Amendment.

The federal law prohibits such funding from being provided to states or entities that practice discrimination against a health care organization on the basis that it “does not provide, pay for, provide coverage of, or refer for abortions.”

“And yet you call yourself ‘pro-life’ @realDonaldTrump??” Newsom said in a tweet. “You sicken me.”

Trump is threatening to take away ALL OF OUR HEALTHCARE FUNDING.

TENS OF BILLIONS of dollars.

10 MILLION PEOPLE who are:
poor
sick
kids
seniors
families
will LOSE their healthcare.

And yet you call yourself “pro-life” @realDonaldTrump?? You sicken me. https://t.co/pXdmeZwbSm

Newsom said a federal opinion four years ago confirmed California’s compliance with the Weldon Amendment. He said California “won’t back down” as the Trump administration tries to “rile up its base to score cheap political points.”

In a statement, California Attorney General Xavier Becerra said women’s health “should never be dangled as bait for the sake of political grandstanding.”

“In California, we will continue to protect our families’ access to healthcare, including women’s constitutional right to abortion. Nothing changes,” Becerra said.

It’s been nearly three weeks since the Jan. 24 notice gave the state 30 days to comply or risk losing federal funding. The Trump administration has not given further details on the timeline it is proceeding with, or more information about the unspecified funds. Officials with the state attorney general’s office did not comment on whether it’s been in communication with the Trump administration.

This threat, Trump health officials said, was prompted by the complaints filed by the Missionary Guadalupanas and Skyline, a megachurch in San Diego County. These are organizations “whose religious beliefs preclude them, in good conscience, from helping to pay for insurance coverage for elective abortions,” Trump health officials said in the notice.

Messages seeking comment from Skyline were not immediately returned. The church filed the complaint in September 2017 and believes abortion “is a grave moral evil” that “violates the Bible’s command against the intentional destruction of innocent human life,” according to the notice. 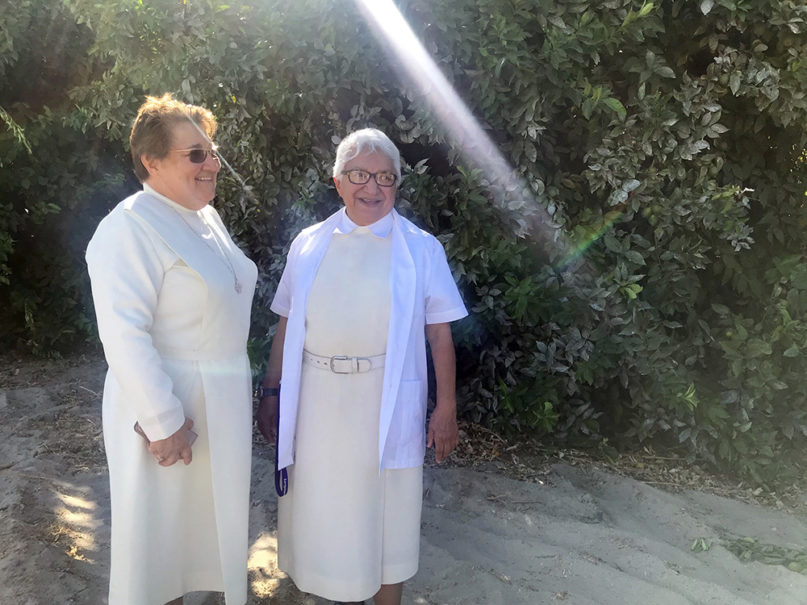 Maria Teresa Pacheco, left, and Aida Sansor are with Missionary Guadalupanas of the Holy Spirit, a nonprofit of Catholic women who seek to bring the Catholic faith to indigenous and migrant communities. RNS photo by Alejandra Molina

The Missionary Guadalupanas of the Holy Spirit are a nonprofit corporation of Catholic women based in Mexico City, but with provincial headquarters in Los Angeles, where they filed their complaint with the U.S. Department of Health and Human Services’ Office for Civil Rights in June 2017.

The Missionary Guadalupanas lost a lawsuit, filed in 2015, that challenged the state’s abortion coverage requirement. A state appeals court threw out the case in 2019. As a result, the group had to get insurance coverage that includes abortions.

“Presumably its members, finding abortion morally, ethically, and religiously unacceptable, would never have an abortion,” the three-judge panel of the state Court of Appeal found. Instead, the Guadalupanas object to “other plan participants being allowed to have abortion coverage that is funded in any amount by the members’ premiums.”

That lawsuit was filed on different legal grounds than the 2017 complaint that claims the state is in violation of the Weldon Amendment, said Stephen Greene, the attorney who represents the Missionary Guadalupanas.

Eckery, a spokesman for Greene, said the sisters are not interested in cutting off funds. He said the Missionary Guadalupanas are not eager to cut off “any of the welfare programs.”

If the state does not comply with the Trump administration’s notice, “then that’s their call,” Eckery said. “They may face consequences that we neither asked for or desired.”

The Missionary Guadalupanas center their identity and pastoral work on the Virgin of Guadalupe, the patron saint of Mexico. On the group’s website, the sisters said they strive to “live the attitudes modeled by Our Lady of Guadalupe: presence, accompaniment, solidarity and compassion towards the poorer people, especially the indigenous, migrants, and the marginalized.”

In 2018, a couple of Missionary Guadalupana sisters were brought on by the Diocese of San Bernardino, which serves Riverside and San Bernardino counties, under a three-year contract to reach the indigenous Purépecha community living in the Coachella Valley. In certain parts of the rural region, Catholic parishes are hard to access for residents without cars. The sisters aim to bridge that gap by ministering to those communities.

“We’re just interested in having a productive conversation that addresses the legitimate conscience concerns of the Guadalupanas and of others,” Eckery said.