(RNS) — One hundred years ago this week, the Philadelphia Inquirer recorded the arrival in its city of a South Asian man in a green and gold turban. Others noted his “Gospel likeness” and “flowing” beard, as one who “spoke like a Biblical prophet.” Upon seeing him, one young girl would later remark, “Look, Mother, Jesus Christ has come!”

Immigration officers denied him entry because they feared that Sadiq, the first Muslim missionary on these shores, would promote polygamy. He persisted and was detained. From his cell in Gloucester, New Jersey, he wrote to the secretary of state in Washington to explain that as a Muslim, he was duty-bound to obey the law; if America outlawed polygamy, he would obey. Seven weeks later, on April 11, 1920, Mufti Muhammad Sadiq was released.

By the time he left two years later, Sadiq, an Ahmadi Muslim, had established a lasting example for Muslim American relations. 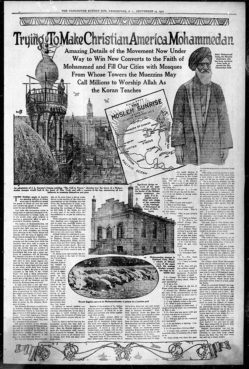 A Sept. 24, 1922, article about Mufti Muhammad Sadiq in The Vancouver Sun. Courtesy image

The environment for Muslims that Sadiq experienced was not unlike today. Coverage of his arrival ranged from the amusing — he was mistaken for a Hindu and a Buddhist — to the sensational — he was called an “infidel” whose “militant followers” would “invade (with) Allah’s army.”

Federal bans targeted Muslims even then. They were barred from entry under the Immigration Act of 1891, as officials falsely conflated the practice of polygamy in some majority Muslim lands with the assumption that Islam mandated polygamy. The 1907 Pacific Coast race riots included attacks by Washington state locals on Indian migrants whom they saw as competitors for jobs. Subsequent legislation — the Oriental Exclusion Act of 1917, Johnson Act, Johnson-Reed Act — all served to deepen suspicions of Muslims.

Against this backdrop, Sadiq’s feat of winning his entry through legal, peaceful means was extraordinary. It eased subsequent immigration for non-whites, reinforced America as a country where the rule of law is oftentimes respected, and demonstrated that “Muslim American” is not an oxymoron.

Holding six doctorates, speaking “faultless English” and six other languages, Sadiq personified the value immigrants could provide. He delivered more than 50 public lectures and earned favorable coverage from newspapers in more than 25 states, from New York to California — a testament to America’s fairness and a powerful rebuttal to those who fear Islam. If Sadiq had anything “un-American” to say, it would surely not have gone unnoticed. Indeed, in Sioux City, Iowa, the local ministerial association plotted to kick out Sadiq, not for any crime, but because of his critique of some Christian missionary work in India.

From Highland Park, Michigan, Sadiq inaugurated what is considered America’s first mosque, declaring it open to “believers of all religions.” He explained it is a Muslim’s religious duty to be a good citizen and learn that country’s language to promote understanding. The Detroit Free Press in February of 1921 encapsulated the inauguration’s spirit: “Moslems Avow Loyalty to US.”

Sadiq was also the most prominent voice in rebutting American misconceptions about Islam through a jihad of the pen. From April to May 1920 alone, he published 20 articles. In 1921, he founded the first English-language Muslim periodical in America, The Moslem Sunrise, which is still published today as The Muslim Sunrise. He corresponded with President Warren Harding, Thomas Edison and Henry Ford. His success, as one newspaper noted, spread Islam “without the sword.” 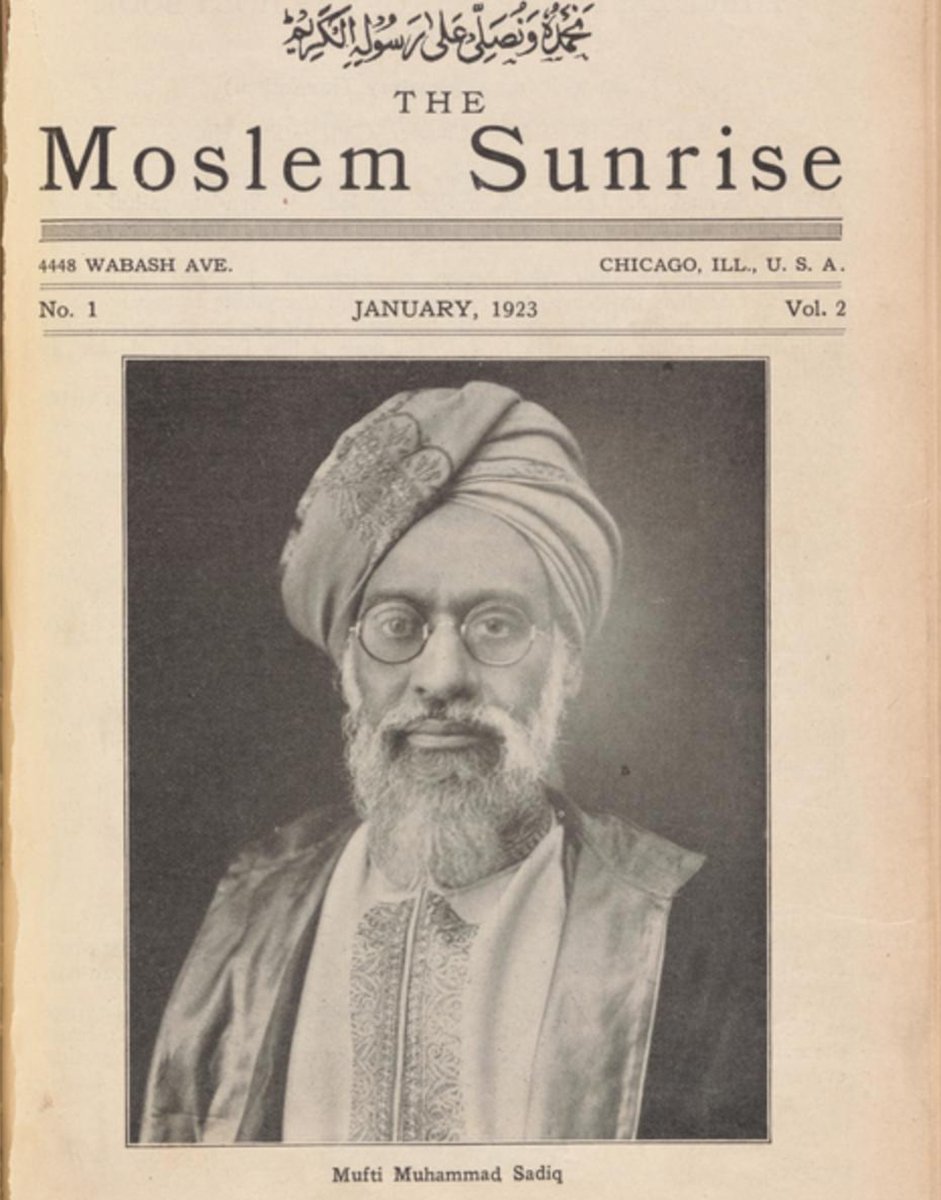 Portrait of Mufti Muhammad Sadiq in a 1923 edition of “The Moslem Sunrise,” a periodical he founded. Photo courtesy of Creative Commons

And spread Islam he did. During his sea voyage to America, he converted men from Bosnia, England, Syria and China. While detained, he converted people from Argentina, Belgium, France, Germany, Guyana, Honduras, Italy, Jamaica, Poland, Portugal, Russia and Spain. He befriended Marcus Garvey and converted many of his followers. Sadiq also worked with the (white) United Automobile Workers. Within 13 years of his arrival, 20,000 Americans had become Ahmadi Muslim.

The irony of Sadiq’s pioneering missionary visit is that in America today, some Muslims refuse to acknowledge Ahmadis as true Muslims or their first mosque, Masjid Al Sadiq in Chicago, as America’s oldest. In some parts of the Muslim world, too, Ahmadi Muslims are sorely persecuted. In Pakistan, for example, a constitutional amendment declares all Ahmadis to be “non-Muslim” under punishment of imprisonment and death.

But Sadiq’s work continues. To celebrate its centennial on February 15, 2020, the Ahmadiyya Muslim Community USA will conduct a variety of community service events in nearly 30 states, from food and clothing drives to neighborhood cleanups. Open mosque events, inviting people from all walks of life, will be held during Ramadan, including at Baitul Aafiyat (Philadelphia’s largest purpose-built mosque, which opened in 2018).

In May and November, “Muslims for Remembrance” and “Muslims for Veterans” initiatives will honor the military. On July 4, the “Muslims for Loyalty” campaign will coordinate various events to celebrate Independence Day. And, in remembrance of 9/11, the 10th annual “Muslims for Life” blood drive will be held across America in September to save American lives. As Sadiq espoused 100 years ago while walking the streets of Philadelphia, as Americans, it is our duty.

(Amjad Mahmood Khan, an adjunct professor of law at University of California at Los Angeles, is national spokesperson for the Ahmadiyya Muslim Community USA. The views expressed in this commentary do not necessarily reflect those of Religion News Service.) 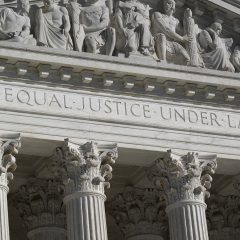 Religion Hub
Transgender rights, religion among cases justices could add
Follow us on Facebook!
Submit your photos to RNS