NASHVILLE, Tenn. (RNS) — The Southern Baptist Convention’s Executive Committee will launch a task force to examine the activities of the Ethics and Religious Liberty Commission, the convention’s public policy organization headed by the theologian and author Russell Moore.

Southern Baptist leaders fear controversy over Moore could lead to a drop in donations.

Moore, 48, who has been president of the ERLC since 2013, has been an outspoken critic of Donald Trump since the president began campaigning for the White House. In 2016, Moore called Trump “an arrogant huckster” and wrote an essay for the National Review citing “Trump’s vitriolic — and often racist and sexist — language about immigrants, women, the disabled and others.”

In response, Trump attacked Moore on Twitter, calling him “a terrible representative of Evangelicals and all of the good they stand for.” The same tweet called Moore a “nasty guy with no heart!”

The request for an inquiry came from the Cooperative Program Committee, an SBC body that deals with giving from churches to the convention’s national ministries.

Mike Stone, chair of the Executive Committee, said in a news conference Tuesday (Feb. 18) that committee members have heard anecdotal accounts of churches withholding money or reducing giving because of concerns about the ERLC. He said that local church leaders and state Baptist leaders have expressed concerns in private but not on the record. The task force will give them a place to officially lodge their concerns.

Stone added that the Executive Committee does not know if concerns about the ERLC have indeed caused giving to drop. He also said that there is a lot of “fake news” about the convention and about the ERLC and that the task force will try to find the truth.

In early February, Baptist Press, the official news service of the SBC, reported that giving to the Cooperative Program was up about 3% from last year. Last year Baptists had given $64.5 million by the end of January. This year, giving totaled just under $66.5 million by the same point in the year.

Similar complaints were raised against ERLC in 2017 over Moore’s anti-Trump comments. At that time, Moore met with Frank Page, the former president of the Executive Committee, and the two agreed to work together for the good of the convention.

Stone said the task force is not an attempt to remove Moore from office.

“I am fully aware that we may find, as we did in 2017, that what we’re hearing is not as significant, in fact as it is in perception,” Stone said. “And what we want to find is just where the facts would lead us.”

He added, “Southern Baptists can joyfully and in a unified manner resolve this question so that it does not continue to be a potential source of discussion that distracts us from our mission, which is to take the gospel of Christ to the ends of the earth.”

Moore does not report directly to the committee. However, the committee does oversee the funds from the denomination’s Cooperative Program, which in turn awards funding to the ERLC. Stone said that while ERLC’s trustees govern the commission’s activities, the Executive Committee has a responsibility to act when giving is affected.

Moore is the second ERLC president in a row to face controversy. Longtime ERLC President Richard Land was censured in 2012 by the commission’s trustees for plagiarism and insensitive comments about race on his radio show. He retired the following year.

Given the controversy the organization has generated, Stone was asked if the ERLC had outlived its usefulness and whether funding the commission was still a good use of Cooperative Program funds.

He said he expects the task force will look into that question.

The task force will “review the past and present activities” of the ERLC, said Stone, and “assess whether the actions of the commission and its leadership are affecting Cooperative Program giving or the further advancement of the Cooperative Program.”

Elizabeth Bristow, ERLC press secretary, told RNS in a statement that the commission relies on the “sacrificial giving of churches.”

“We hear from our churches every single day with questions about some of the most complicated issues imaginable,” she said.  “In every case, we work to serve our churches with gospel-focused answers.”

The statement added that the ERLC occasionally gets questions about its work from churches.

“Thankfully those questions are easier to answer,” Bristow said in the statement. “That’s because, every day the men and women serving at the ERLC stand for the unborn, advocate for religious liberty, work to address the crisis of sexual abuse, and labor to equip men and women to answer ever-changing questions in light of the everlasting promises of our Lord.” 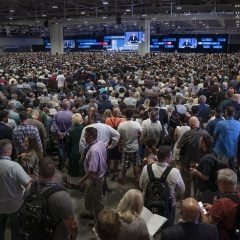