The 80-plus-member body, which acts on behalf of the Southern Baptist Convention when it is not in session, took a vote to disfellowship Ranchland Heights Baptist Church in Midland, Texas, during its regularly scheduled meeting in Nashville.

Ranchland Heights is “no longer to be considered in friendly cooperation with the Southern Baptist Convention,” said the Rev. Mike Stone, chairman of the Executive Committee.

“The EC has moved to disfellowship Ranchland Heights Baptist Church in Midland, Texas, because of its employment of a lifetime registered sex offender as pastor,” the post stated.

The church expelled Tuesday is the first to be recommended for removal by the newly formed Credentials Committee, which was created last year in response to the sexual abuse crisis in Southern Baptist life. Media reports in 2019 found widespread sexual misconduct among Southern Baptists who hold formal church roles.

As a part of its reckoning, voting representatives of Southern Baptist congregations changed the convention’s bylaws during its 2019 annual meeting held in June in Birmingham, Alabama, to create the Credentials Committee. 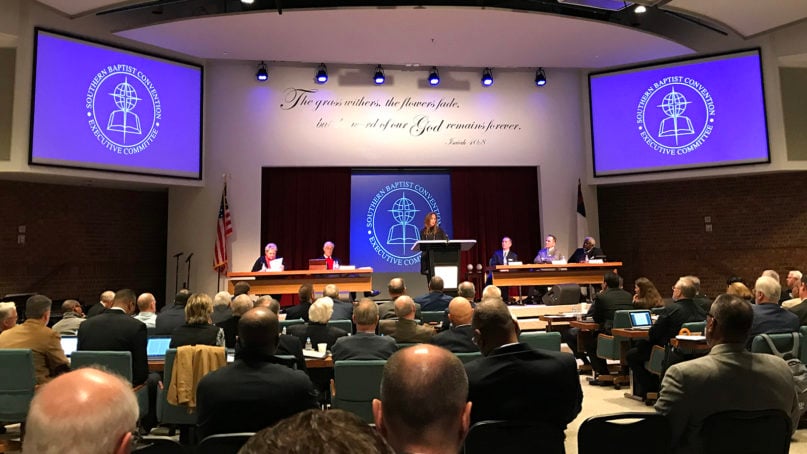 The nine-member Credentials Committee now plays a role in determining whether a church can stay in the Southern Baptist Convention, the largest Protestant denomination in the U.S., or if it has to go.

But the Credentials Committee does not have the final say.

On Tuesday, the Executive Committee announced its decision to remove the church after meeting in executive sessions.

The Credentials Committee is not an investigative panel; instead, it makes inquiries.

The Credentials Committee also does not just address issues concerning sexual abuse. What the committee assesses is whether a church with a complaint against it is in friendly cooperation with the convention or if it has departed from Southern Baptist polity, doctrine or practice.

Prior to the Credentials Committee’s creation, the Executive Committee could expel churches. The last church to be kicked out of the Southern Baptist Convention was Raleigh White Baptist Church in Georgia. Raleigh White was removed in 2018 over charges of racial discrimination.

Southern Baptist churches also have been removed in the past for LGBTQ-related issues.