(RNS) — When a major storm knocked out our electricity for a few hours recently in Charlotte, North Carolina, where I live with my family, I posted a brief complaint on Facebook. A few friends extended their sympathy for my minor misfortune, but none struck me as hard as one friend in Yemen, which has been wracked for years by a brutal civil war. He mentioned, without intending to provoke the guilt I suddenly felt, that his family has been without power for more than three years.

As an immigrant from the Middle East and a person of the Baha’i faith, my guilty feelings run deeper than matters of daily comforts. Another Yemeni friend, whom I will not name for his own safety, is one of 24 people the Houthi authorities are putting on trial Tuesday (Feb. 25) on charges of apostasy and espionage. These charges are baseless, obscuring the fact that the true reason for their prosecution is that they are Baha’is. These charges carry the death penalty.

Those who practice the Baha’i faith have always been persecuted in Iran, where it was deemed an affront to the finality of Islam as a divinely ordained religion, though its peaceful principles have been largely welcomed in almost every other country of the world. But since the Houthis, clients of Iran’s theocratic government, came to power in 2013, they have begun a program of systematic persecution against the Baha’is reminiscent of Iran’s historical enmity. The same charges of espionage and apostasy that the Houthis are attempting to stick to my friend are the very same used to justify the execution of hundreds of Baha’is in Iran in the 1980s. 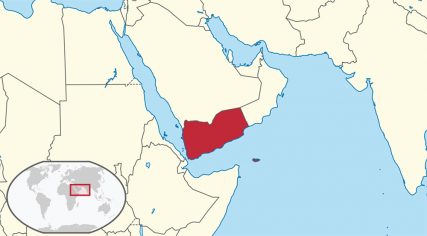 Yemen, in red, in the Middle East. Map courtesy of Creative Commons

While my friend has so far avoided being detained, the Houthis have imprisoned a number of his fellow believers, including Hamed bin Haydara, who was sentenced to death more than two years ago on identical charges. Despite an outcry from human rights organizations, other governments and the media, Hamed’s case has stagnated in the appeals process. With his next court date set for March 31, his fate is surely linked to that of my friend and his co-religionists.

Their persecution is familiar to Baha’is across the region. I remember well from growing up in Egypt the rapid beating of my five-year-old heart as I was chased down the street by older boys with switchblades. I recall my confusion as my primary school teachers told me repeatedly in front of all my classmates that I was an infidel.

When my brother died, my father had to go from government office to office asking for a permit to bury him, finally being granted permission to bury him in a “free-thinkers’” cemetery. Later, the cemetery was seized by the government as they further tightened the noose around the Baha’i community in Alexandria.

After I came to Canada as a refugee in 1965, my father was arrested back home and imprisoned over and over on charges of apostasy and subversive activities merely for practicing his faith.

It hurts to see these stormy memories, long settled in my distant past, whirl to life again in Yemen, buffeting my friend and his community with the same terrible force.

The echoes of repression from my friend to me haunt me and bring the urgency of the principles for which we have suffered into high relief. The conflict in Yemen began as a low whistling wind of hatred. It has since erupted into a deadly squall.

And while the Houthi authorities and their enemies squabble over power, the rest of the country has gone into a blackout. My friend, and even the Yemeni Baha’i community as a whole, is merely one small part of that story. But whatever happens to him, and whatever happens to them, will be a part of that story forever, the old and dismal story of what happens when humanity chooses war over peace.

(Nabil Elias is dean of education at Ethical Business Building the Future and an emeritus professor at the Belk College of Business, University of North Carolina, Charlotte. The views expressed in this commentary do not necessarily reflect those of Religion News Service.)

Editor’s note: paragraph 2 has been modified for clarity and to correct omitted text.