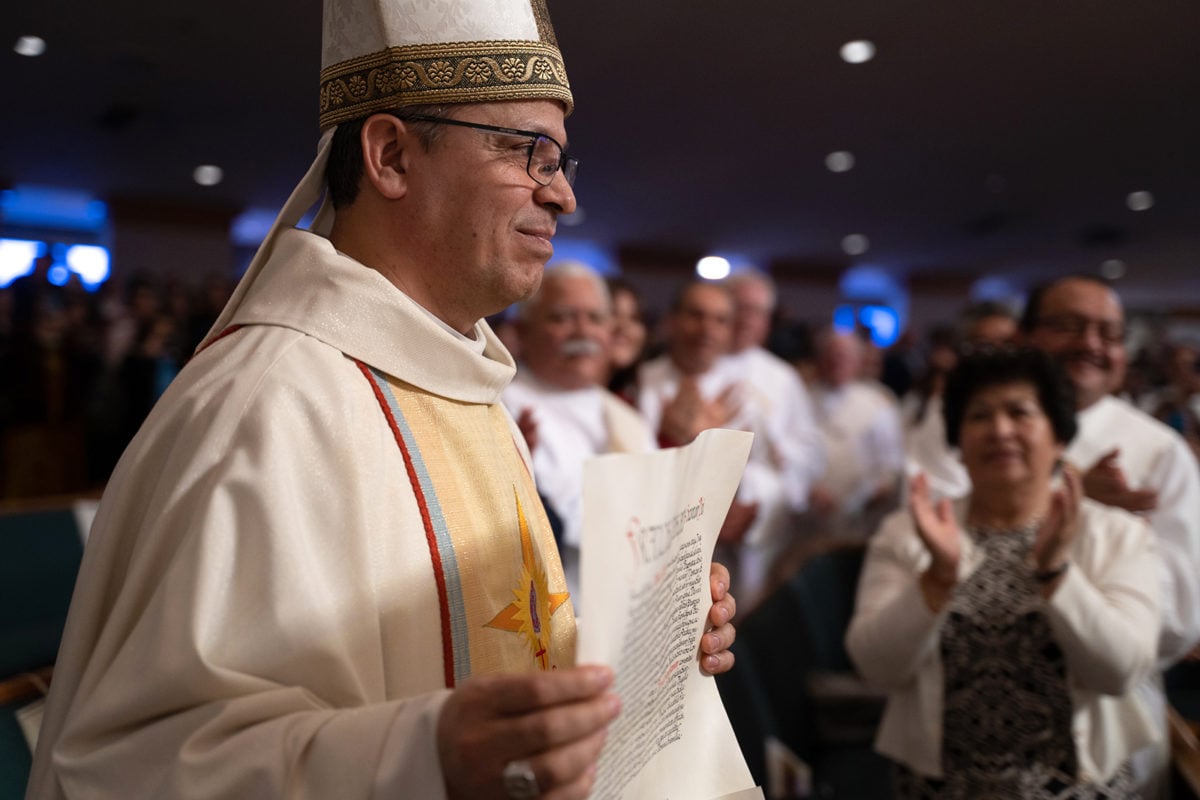 CHINO HILLS, Calif. (RNS) — Hundreds of people gathered Monday (Feb. 24) at St. Paul the Apostle Church for a Mass that welcomed Bishop Alberto Rojas — who was named to lead the Diocese of San Bernardino, one of the nation’s largest Roman Catholic dioceses.

Pope Francis appointed Rojas, a former auxiliary bishop in Chicago, to be coadjutor bishop of the Diocese of San Bernardino. As coadjutor, Rojas will assist Bishop Gerald Barnes — who has led the the diocese for more than two decades — in administering the diocese in the months leading to his June 2021 retirement.

The estimated three-hour service was held in English, Spanish, Vietnamese and Igbo. Archbishop Christophe Pierre, the papal nuncio to the United States; Archbishop José Gómez, president of the U.S. Conference of Catholic Bishops; Cardinal Roger Mahony; and visiting priests and parishioners from Chicago and Mexico were among those in attendance.

The church appeared to be at capacity, with parishioners filling the halls of the service as well as a separate room where a video of the Mass was broadcast.

During Mass, Pierre read the apostolic mandate from Francis that declared Rojas as the coadjutor of the San Bernardino Diocese. Worshippers stood in applause as Rojas walked the room while displaying the pope’s mandate.

People of First Nations, Latino, African and African American, Asian and Pacific Islander and European descent each walked up to the altar to welcome Rojas.

In his homily, Rojas — who was born in Aguascalientes, Mexico — preached in English and Spanish about the dangers of division.

He recalled a recent meeting with Pope Francis where he asked the pope about his greatest fears. “With no hesitation, he said it right away: 'division,'” Rojas said.

“That is our challenge, as missionary disciples, to help the world to distinguish good from bad, good religion from bad religion,” he said. 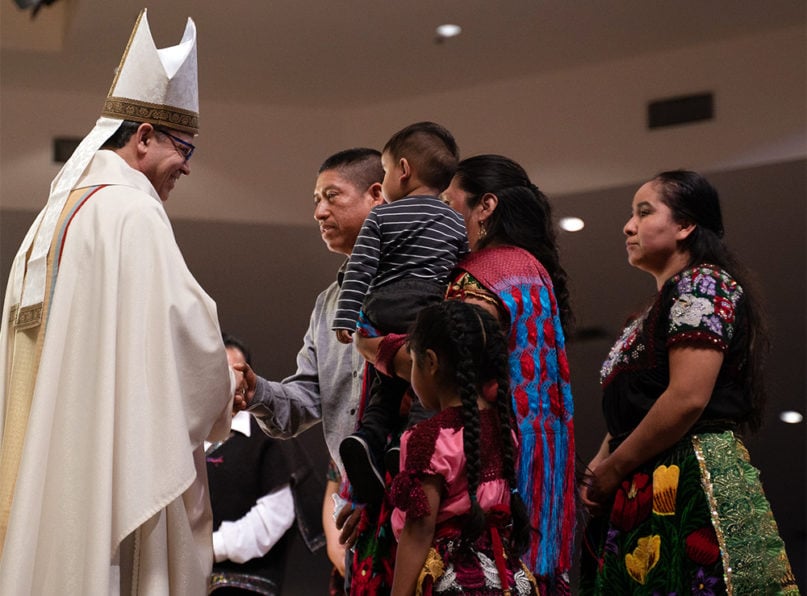 Rojas cited Bob Dylan's song “Gotta Serve Somebody,” when preaching about making the decision to serve God. In the lyrics, Dylan sings: “Well, it may be the devil or it may be the Lord. But you’re gonna have to serve somebody.”

“We want to serve the Lord,” Rojas said.

He went on to quote Francis, saying, “Unity does not imply uniformity.

“It does not necessarily mean doing everything together or thinking the same way, nor does it signify a loss of identity,” Rojas said.

Rojas praised the diversity of the region’s Catholic population, which, although largely Latino, celebrates Mass in more than 10 languages, including English, Spanish, Tongan, Korean, Igbo and Indonesian. Priests have been white, Asian and Pacific Islander, Latino and black.

In a recent news conference announcing his new position, Rojas said he aims to minister to the poor, the incarcerated and the youth. He also praised Barnes for pushing the church to embrace immigration reform.

Rojas said that even though he’s lived in the United States most of his life, he can identify with the experience of immigrants “because I believe I am among them.” He said his father worked hard in the U.S. and eventually gained residency for himself and his family. Rojas said he hopes to follow in Barnes’ footsteps in advocating for immigrants.

Carlos Gonzalez, who like Rojas is from the Mexican state of Aguascalientes, couldn’t help but beam with pride as he admired Rojas’ personal coat of arms that was emblazoned on a pamphlet for the Monday service.

Rojas’ emblem incorporates wavy bars of two shades of blue to represent water, a symbol of Aguascalientes, which in English translates to “hot springs.” Inside the shield is also a white arch that represents the San Marcos garden in Aguascalientes.

Gonzalez, 51, said he felt grateful that a “fellow countryman is at the feet of our Lord.”

Parishioners at the ceremony, like Mary Dyall, said it’s important that a bishop have a warm personality so “you don’t feel intimidated when you approach them.” Maria Michels, 64, said the bishop should embody humility “because that’s how the world is going to get better.” Michels said it’s important for her that the new bishop bring different ethnic communities together as well as address the Catholic youth leaving the church.

Lupita Rosales, 26, said she is excited about Rojas’ leadership. She said Barnes led as an example and inspired Catholic youth.

“I can see that he’s very humble, very approachable as well and very much a people’s bishop,” Rosales said of Rojas.

Rosales related to Rojas’ sermon on division, especially when talking about young Catholics leaving the church. “It’s something that hits close to home because I have found truth here and I just wish that a lot of young Catholics that are leaving would find the same truth that I’ve found,” she said.

As a Catholic, she's passionate about anti-abortion and immigration issues. “My parents are immigrants so I think that’s going to be a topic that is going to matter to me for a very long time,” she said.

The ceremony, Rosales said, is “something that I will remember forever.”