(RNS) — A bill introduced in the Ohio Senate on Wednesday (Feb. 26) to allow student athletes to wear religious apparel without the need for special waivers was inspired by a Muslim teen who was disqualified from a track meet last year due to her hijab.

Sen. Theresa Gavarone invited Noor Alexandria Abukaram, an athlete and junior at Sylvania Northview High School in eastern Ohio, to the Statehouse to help introduce the bill ending the waiver requirement. The bill has moved to a Senate committee for review.

“Freedom of religion is a fundamental right and civil liberty in this country,” Gavarone said in a statement. “My hope is that through this legislation and Noor’s story we will be able to ensure that no one, regardless of religious affiliation, has to choose between playing a sport or their religious beliefs.”

No Ohio school or interscholastic organization will be permitted to limit “wearing religious apparel when competing … including requirements that participants obtain advanced approval, written waivers, or any other permission,” except in cases in which wearing such apparel could pose a “legitimate danger to participants,” the bill reads.

Gavarone began drafting the bill after she reached out to Abukaram and her lawyer on Jan. 24, a few months after Abukaram had been disqualified from a district cross-country meet. That same day they met, the teen had held the launch event for her new advocacy organization, Let Noor Run, alongside other prominent Muslim athletes who had faced hijab bans in sports.

“This bill really just emulates everything I’ve been working toward since I started this mission,” Abukaram said. “The whole idea is just to make sure this never happens to anyone ever again, whether they’re Muslim or whatever it is that they believe in. They shouldn’t have to stop playing sports because of their beliefs.”

Today, I welcomed Noor Abukaram & her family to the Statehouse. Noor was disqualified from a cross country race last year because she wore her hijab.

I asked her to help me introduce SB 288 to ensure that no one has to choose between playing a sport or their religious beliefs. pic.twitter.com/MKEHOSQF8k

In October, the 16-year-old made national headlines when her fastest 5K of the season was disqualified due to a uniform violation. Abukaram had worn her hijab to previous meets with no issues, but officials said they were simply enforcing rules requiring coaches to submit a waiver for a uniform exemption in order for athletes to wear religious headgear. 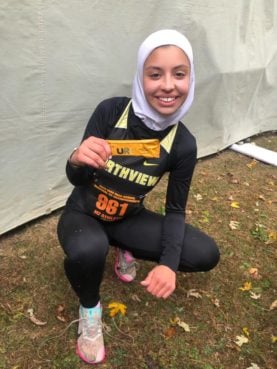 A week after being disqualified, Noor Alexandria Abukaram ran a new personal best on Oct. 26, 2019. Photo via Facebook

Abukaram told Religion News Service the rule change was insufficient, with coaches remaining as intermediaries between the association and athletes in discussions of uniform regulations.

“Through this bill, me and all other athletes in Ohio are protected,” she said. “The actual rule change ended up taking athletes out of the equation and made everything have to go through the coach. They completely forgot about me as a player and decided they’re going to go inform my coach instead.”

Abukaram said the new bill is “well thought out” and that she is confident it would, if passed, provide athletes with much stronger protections against religious discrimination.

As the bill awaits review, Abukaram says the Let Noor Run team will continue to push against the waiver requirement in Ohio and across the country.

Articles of Faith
It’s beyond time to remove bans on religious attire from sports uniforms
Follow us on Facebook!
Submit your photos to RNS