VATICAN CITY (RNS) — Catholic priests and seminarians prepare to toss their cassocks aside and give their all on the soccer field, as Rome launches its 13th annual Clericus Cup.

“It was really cool to come to an international place like this, especially coming from the Midwest,” Paul Floersch, a native of Omaha, Nebraska, told Religion News Service on Friday (Feb. 28). Floersch, a seminarian at the North American College, is competing for the third time in the Clericus Cup.

“To see all these countries coming together in this Catholic setting brings together two of my favorite things: the church and soccer,” he added.

What started as a small tournament for clergy in the Eternal City has become a global attraction, as many international seminarians studying in Rome compete for the sought-after prize.

The annual games and their collared soccer players have garnered public attention in recent years, from media reports to an appearance on the Italian Masterchef show.

The games will begin on March 7, with 16 teams taking part in the tournament, which is promoted by the Italian Sporting Center with the patronage of the Italian bishop’s conference, the Vatican Department for Lay people, Family and Life and the Pontifical Council for Culture. This year’s events are sponsored by the Knights of Columbus.

The finals will take place on May 30, and the team captains will have a private audience with Pope Francis on May 27. This year also marks the debut of the Argentine team from the country’s seminary in downtown Rome, and team members say they “feel the pressure.”

“We’ve got some big and tall priests,” joked the captain of the Argentine team during a press conference on Feb. 27 at the sporting center of the Knights of Columbus, which overlooks the city of Rome and the large dome of St. Peter’s Basilica, expressing his hope to do well in the tournament.

Francis, who was named “honorary captain” during a meeting with some players, will bless the Clericus Cup, shaped like a soccer ball but with the “saturno,” a traditional hat worn by Roman Catholic clergy.

Floersch won the championship the first year he played in 2018, saying that it was a “great and fun experience.”

For the seminarian from the Midwest, soccer isn’t all about winning. “Sports in general are an excellent way to build the faith,” he said. “Something about being committed to the practice is not unlike being committed to prayer.” 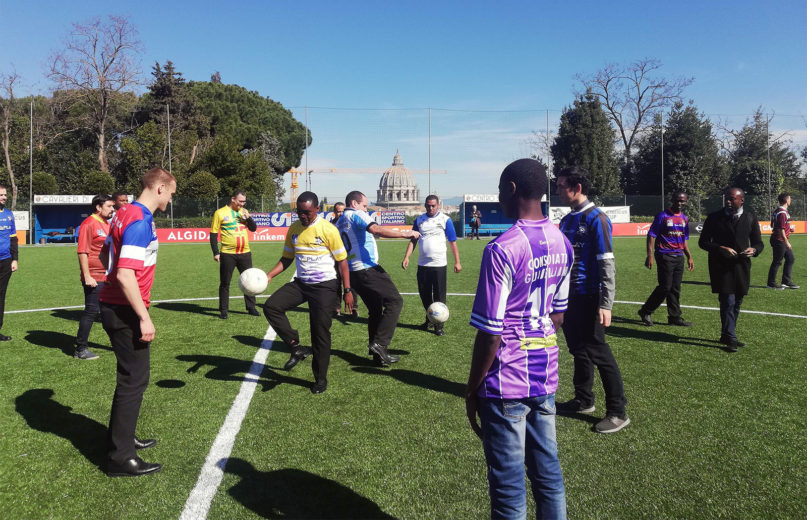 Kyle Poje, a seminarian from Seattle, Washington, also studies theology at the North American College and has participated in the tournament for two years. He, too, finds a strong connection between living out the Catholic faith and competing on the soccer field.

Before the press conference, teammates celebrated mass together as they do after every game. In previous years, players would often kneel to pray after a goal or victory. But not everything about the Clericus Cup is holy — one can expect even priests and seminarians to play foul.

“There are red cards, yellow cards and blue cards, which show the Christian idea of redemption,” Poje said. Blue cards, a unique aspect of this Catholic soccer tournament, require players to take five minutes of reflection off the field.

“We come here, and we play hard and, yeah, we sometimes hurt each other,” he said. “Then the beauty is that we can forgive each other and move forward.”

On his fourth time participating in the Clericus Cup, Father Eric Boateng from Ghana will play for the Altomonte College in Rome. For him this tournament is an opportunity to meet with other seminarians and make friends with people who have the same calling and the same passion for football.

“We still try to win!” he told RNS, adding that even when he gives it his all on the field, he still tries to remember the virtues of patience and charity.

Toni Faltak, a priest at the Gregorian University in Rome who is originally from Croatia, hopes this will be the year his team brings home the prize. The prestigious university has so far had to accept second or third place.

“Maybe this is the year!” he told RNS hopefully.

The motto for this year’s Clericus Cup championship is “pray and play,” in order to promote an evangelizing perspective on soccer and sports in general.

“We don’t just play,” said Mons. Melchor Sanchez, undersecretary for the Pontifical Council for Culture at the Vatican, during the press conference.

“For us, as priests and future priests, sport had another educational function,” he said, noting that many seminarians and priests will one day return to their home countries and be able to adapt this model in their parishes, seminaries and youth work.

For Totomalaza Docellin Antonio, a seminarian in his third year studying theology, this rings especially true, as this will be his final chance to play for the Clericus Cup. He told RNS he hopes to promote soccer tournaments with the young people he will administer to in his home country, where soccer is a very popular game.

“People think priests don’t play soccer, but it’s actually fun for them to get a chance to see us play,” he said. “Seeing us this way creates a new culture.”