A state of emergency was declared Tuesday morning (March 3), according to the Tennessee Emergency Management Agency.

“Please keep the great people of Tennessee in your hearts, thoughts and prayers,” the agency posted on its Facebook page. “Strong storms and tornadoes have caused severe damage, injuries and death. Our state is strong, because our people are strong.”

Faith groups will assist with the cleanup from the storm.

“We have local teams that have already gotten out and are trying to help people in Nashville and the surrounding area,” Jones told the Tennessee Baptist and Reflector, the state Baptist paper. “Meanwhile we are working with emergency management services to better understand where we can deploy resources.”

Chris Turner, spokesman for the mission board, said some volunteers were already at work in their local areas. 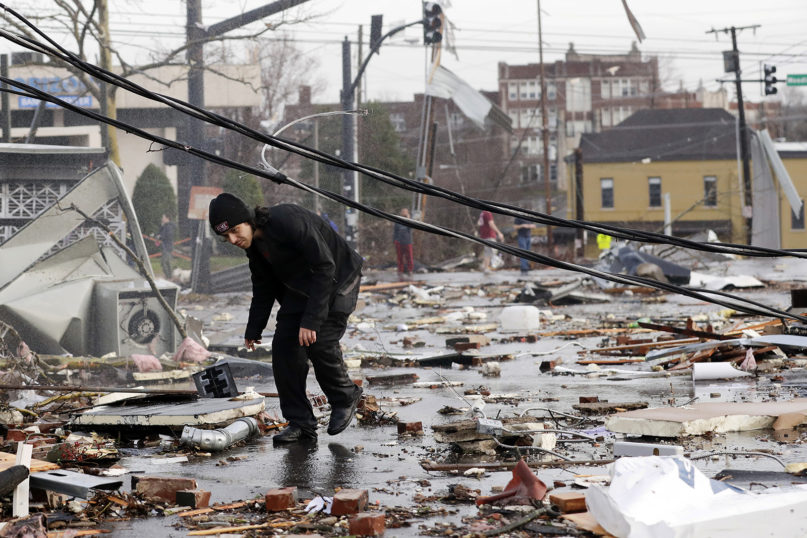 The Baptist and Reflector reported that one church staff member was killed and six church buildings were damaged.

Donations to assist in disaster relief are being accepted at tndisasterrelief.org. The Community Foundation of Middle Tennessee is also accepting donations to assist victims. Hands On Nashville, which coordinates volunteer efforts, is accepting sign-ups from those interested in helping with relief efforts. Churches of Christ Disaster Relief Effort Inc., which is based in Nashville, is doing assessments.

Two people who attended separate Church of Christ congregations in Cookeville were killed, according to The Christian Chronicle newspaper. Other church members were injured or saw homes damaged.

East End United Methodist Church was also damaged by the tornado, according to The Associated Press.

“It’s this beautiful Richardson Romanesque church; the bell tower is gone, the triptych widow of Jesus the Good Shepherd that they just restored and put back up a few weeks ago is gone,” Paula Wade of East Nashville told AP. East End UMC is not far from St. Anne’s Episcopal Church, which suffered major damage in a 1998 tornado.