(RNS) — Every week, thousands of Catholics from all walks of life swarm into St. Peter’s Basilica at the Vatican to participate in Mass with Pope Francis, who has put concern for the poor at the center of his papacy.

But now, a few lucky people may have the opportunity to attend a private Mass with the pontiff.

That’s according to a six-figure offer that appeared recently in the exclusive new Whispers app, which was unveiled last month and is only available to owners of new Rolls-Royce automobiles.

The app offers inspiration for the elite and access to “transformative, inspiring and entertaining experiences,” according to a Rolls-Royce video posted on YouTube.

“Whispers is an ethereal companion from Rolls-Royce Motor Cars, effortlessly connecting like-minded individuals who dare to change the world,” reads an official promotional image for the app.

According to screen shots obtained by Religion News Service, the app featured an offer that promises a one-hour private audience and Mass with the pope, followed by an “exclusive” tour of the Vatican and other sites around Rome.

“The Pontiff himself will personally provide over and celebrate a private Holy Mass with you,” the offer reads. “He will administer the Holy Sacrament by his very own hands, leaving you and your guest(s) with personal blessing that will be unique to each of you.”

In addition to being promised “limousine transportation” and “five-star accommodation,” applicants are also told that a minimum “fully deductible” donation to the Catholic Church of 100,000 euro, or around $112,000, is requested and will be “hand delivered to the Pope himself.” 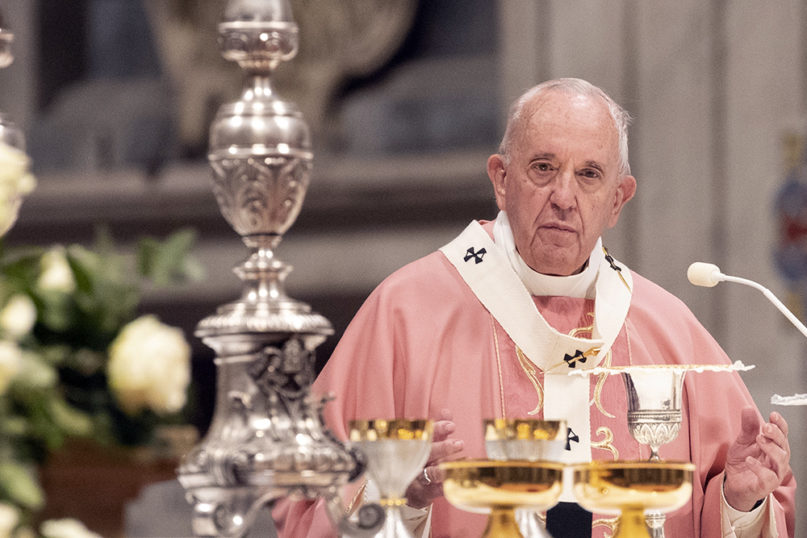 Pope Francis celebrates a Mass for the Philippine community of Rome, in St. Peter’s Basilica at the Vatican, Sunday, Dec. 15, 2019. (AP Photo/Alessandra Tarantino)

A spokesperson from Rolls-Royce told RNS that the offer is “not operated by Rolls-Royce, but rather a third-party facilitator” which is listed as Italian Luxury Living. This is the first Pope Francis trip ILL has offered.

A representative for ILL said that the recommended church donation is in addition to the cost of the overall trip, which is listed as 120,000 pounds, or $155,000.

“Whilst there is no expectation of a minimum donation from the church, we recommend something in the region of (100,000 euros) in respect of the unique opportunity to meet the pope in person,” the representative said.

While there have been inquiries, no one has formally booked a trip to meet with the pontiff, who often is transported in a humble Fiat. The ILL representative noted that any funds provided to the church were not set aside for any specific purpose and that “the coronavirus issue is certainly not encouraging traveling to Italy at the moment.”

Any meeting with Rolls-Royce owners might catch Pope Francis by surprise: A Vatican spokesperson said the press office was unaware of the offer.

It is not unheard of for the pope to meet with dignitaries or wealthy businesspeople. In 2016, Francis met with both Facebook founder Mark Zuckerberg and Apple CEO Tim Cook.

But an exclusive, high-priced offer to meet the pope is unusual, especially given that Francis has repeatedly emphasized the plight of the poor and sometimes spoken critically of the wealthy. In his 2013 apostolic exhortation “Evangelii Guardium,” Francis decried so-called trickle-down economics, which he said “has never been confirmed by the facts,” and called on the rich to serve the impoverished.

“Money must serve, not rule! The Pope loves everyone, rich and poor alike, but he is obliged in the name of Christ to remind all that the rich must help, respect and promote the poor,” he wrote. “I exhort you to generous solidarity and a return of economics and finance to an ethical approach which favors human beings.”

In 2018, he lamented that “the wealthy few” enjoy what “in justice, belongs to all.”

“The cry of the poor daily becomes stronger but every day heard less,” he said, adding that the cry is “drowned out by the din on the rich few, who grow ever fewer and more rich.”

At the end of one’s life, he said, “the power of money and of economic means with which we presume with presumptuousness to buy everything and everyone won’t be able to be used anymore.”