(RNS) — In her new book on Christian nationalism, investigative reporter Katherine Stewart argues that large segments of the religious right are not simply fighting culture war issues, such as abortion or same-sex marriage.

They are, in fact, coordinating an effort to replace democratic institutions and the American system of government with a kind of biblical-based rule.

Her new book, “The Power Worshippers: Inside the Dangerous Rise of Religious Nationalism,” is intended as a wake-up call — directed at more liberal Christians and others concerned with the fusion of God and country.

In it, she argues that the ultimate goal of Christian nationalists is to take over government institutions — from school boards to the federal courts — and imbue those institutions with a very select and punitive biblical morality.

Stewart, who is Jewish and whose husband was raised Catholic, said she first became aware of Christian nationalism when her daughter’s public school in Santa Barbara, California, hosted a Good News Club, which encouraged elementary-grade children to try to convert peers to their evangelical faith.

“I thought it was wildly inappropriate in a diverse public school community,” said Stewart, who wrote about the ministry in her 2012 book, “The Good News Club: The Christian Right’s Stealth Assault on America’s Children.”

In “The Power Worshippers,” Stewart probes the Christian right’s efforts to rewrite American history and place Christianity at its center. With that accomplished, she writes, it has now moved to draft model legislation to exclude protections for members of minority faiths and LGBT Americans, stack the courts with conservative justices, recruit clergy to help register Republican voters and gain power in the Trump White House.

Stewart earned her journalism chops working with Wayne Barrett, the legendary investigative reporter for The Village Voice. This interview was edited for length and clarity.

How do you define Christian nationalism?

Christian nationalism is a political ideology that ties the ideas of America to specific cultural and religious identities. It’s an anti-democratic ideology because it says the foundation of legitimate government is not our Constitution, our democratic system of governance or our imperfect history of absorbing different people from all over the world into pluralistic society — but rather, our government is tied to specific cultural and religious identities. It’s also a device for mobilizing and often manipulating large segments of the American public. 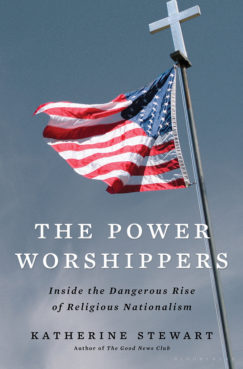 “The Power Worshippers: Inside the Dangerous Rise of Religious Nationalism” by Katherine Stewart. Courtesy image

Many of the rank and file may believe they’re fighting for things like a defense of the traditional family or a ban on things like abortion, but leaders of this movement have framed the issues to capture the votes of a large subsection of the American public. They understand that if you can get people to vote on a few issues you can control their vote. They use their votes on the culture war issues to gain political support for the political leaders the movement favors. When movement leaders talk to pastors, it’s all abortion all the time. Abortion is the beginning and the end. But you hear leaders talk among themselves or to their funders, there’s a real expansiveness on economic questions, domestic policy, foreign policy. This hits home the fact that Christian nationalism is a political movement not merely a stance in the culture war.

For example, Ralph Drollinger, founder of Capitol Ministers, which targets political leaders with his powerful Bible study groups, argues that social welfare programs have no basis in Scripture. He says God believes in deregulation, lack of environmental regulations, lack of regulation on business. This hits home the fact that the movement is not just about banning abortion or reinforcing the traditional family. It’s about government, power and access to money, private, and to some extent, public.

Is abortion still the No. 1 gateway issue for getting evangelicals on board?

The last Values Voters Summit I attended, Tony Perkins, the head of the Family Research Council, stood up on the stage as three or four volunteers pushed out these enormous baby cribs filled with baby hats. It’s a stunt to communicate to rank and file: This is about abortion. Abortion is the most important issue. At another event for pastors, movement leaders tried to communicate to pastors the issue they should persuade their congregants to vote on. One of the leaders said, “When you’re talking to congregations about financial issues, what’s more important: the minimum wage or life?”

Over the years, leaders of a movement called the New Right, one of the intellectual movements that played a very strong role in forming the coalition we see today, settled on the issue of abortion as an issue to unite various disparate strands of the movement.

What kind of threat does the movement present to democratic norms?

Religious nationalism doesn’t just represent its political opponents as people with honest differences of opinion. Trump stood up at this year’s March for Life and accused his political opponents of pushing believers out of the public square. Tony Perkins represented people who vote differently as though they were allied with the rulers of darkness or demonic. This is very dangerous language. If our democracy is to function effectively, we need to recognize that even though we may hold differences of opinion, we share a common humanity. Demonizing one’s opponents has been proved to be dangerous around the world. Our pluralist country has avoided the most toxic forms of religious division.

If you were to advise groups on how to fight back, what would you say?

I remember at a Road to Majority conference, Ken Eldred, a key player in one of the big organizations I’ve written about, said this election is about judges, judges, judges. The focus on judges is really clear. The movement receives a lot of strategic direction from leaders of the legal right-wing advocacy groups, like the Liberty Counsel, Alliance Defending Freedom, the Federalist Society. People who oppose the politics of division and conquest should focus less on personalities than on what kind of justices are they going to appoint. Are those justices going to uphold Constitutional principles and the integrity of the electoral process? Will they uphold the democratic process? Will they accept plurality in a diverse society?

There are other things people can do. The right invests in data, media and messaging. There’s no reason why political progressives can’t make their own investments in data, media and messaging to reach voters and help them make smart decisions at the ballot box. We can all support organizations that are fighting voter suppression, race-based gerrymandering and who support church-state separation. Religious nationalists are using the tools of democratic political culture to end democracy. I continue to believe those same resources can be used to restore it.