VATICAN CITY (RNS) — Streets near the Vatican, usually bustling with tourists, are empty. Restaurants and gift shops are deserted, and idled tour guides sit on the sidewalk, smoking cigarettes and complaining of not having worked in days.

As fears of the coronavirus have spread across Italy, with more than 3,000 cases and 141 deaths reported as of Friday (March 6), many shop owners who depend on tourism are weighing whether to cut their losses by reducing their hours of operation, while others have already closed entirely.

“Starting from Monday before last there has been a drop of at least 80, 90% of our clientele compared to last year,” said Leonardo Di Bartolomeo, the son of the owner of the restaurant La Vittoria, only a few steps from St. Peter’s Square, in an interview with Religion News Service on Thursday (March 5).

Groups have canceled their reservations until at least late April, when pilgrims from all over the world normally flock to the Eternal City for Easter celebrations. But for now seats remain empty and morale is low as business owners look for any sign that the spread of COVID-19 is beginning to stabilize.

Di Bartolomeo said that Americans have led the cancellations since last week, when President Trump recommended not flying to Italy as the virus, which first had its major outbreak near the northern cities of Milan and Venice, began to spread to the rest of the peninsula.

“If things go on like this I think that either someone will have to go on leave of absence or we will have to start laying people off,” said Di Bartolomeo. “Otherwise we can’t cover our bills; that’s the problem.”

While Di Bartolomeo worries that La Vittoria, a fixture in the neighborhood since 1919, may not survive, he notes that limiting his inventory will pass La Vittoria’s hardship on to his suppliers, creating a domino effect through Rome’s economy.

Italy’s leftist governing coalition has suspended taxes for shopkeepers for the month of March, but Di Bartolomeo fears the next month when he will be faced with double the amount of taxes, with no increased income.

Still, he said, they carry on “with a smile.” After all, he added, “We’ve been here a while… we’ve got broad shoulders.” Across the street, Martin Duli, the owner of the bistro Feffo, sits in his empty restaurant, eager to share his concerns. “For the moment, things are really bad,” he told RNS. “We are considering closing, at least from Tuesday to Friday.”

“The problem is that all of us are trying to bring the bread home,” he added, pointing to the only waiter in service, who has also just become a father. “What happens to him if I send him home?” he asked.

Just outside St. Peter’s Colonnade surrounding the square, a religious gift shop called Mondo Cattolico is completely empty, and the numerous staff has little to do.

“After doing all the cleaning and making the place suitable for visiting tourists, there are no tourists,” said owner Gabriele Rossetti as his staff gathered around him. He blames the media for creating a “climate of terror” that discouraged even the few visitors willing to face coronavirus fears from rescheduling their canceled flights.

“From a financial point of view, it’s clear now that this is a disaster, but we try and think about the health of everybody,” he said.

For now, he dismisses the prospect of having to close down but added that if things don’t get better soon he will have to ask his worker for “little sacrifices” in order to keep the shop running.

Near the Vatican museums, the situation appears to be even more bleak. The Saints Tour Agency, normally a hub of visitors eager to see the historic Vatican collections, is completely unpeopled except for three downcast employees.

“The situation is tragic. Some tour companies have closed, others have fired employees,” Eslayed Eslam, one of Saint’s tour guides, told RNS. “They lowered our hours from full time to part time.” Though he has suffered an attendant drop in salary, he adds, “They did it in order to not leave us in the streets.” 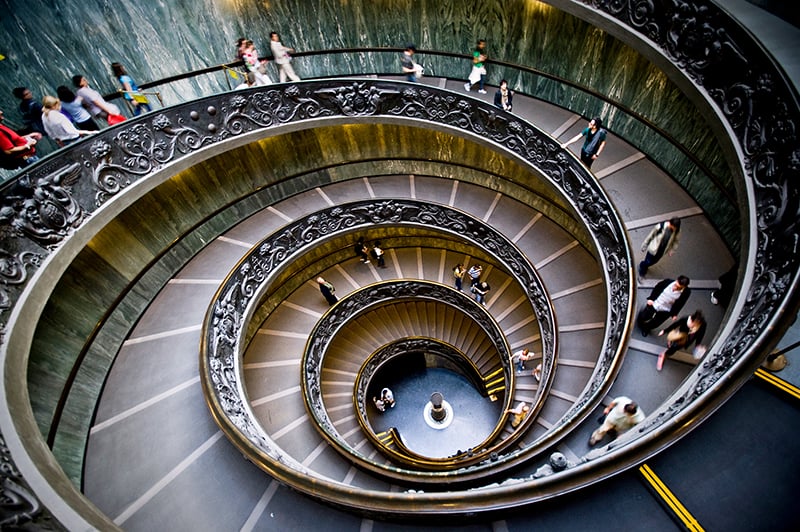 People descend the modern ‘Bramante’ spiral stairs of the Vatican Museums in April 2010. The stairs were designed by Giuseppe Momo in 1932. Photo by Vicente Villamón/Creative Commons

Tour agencies, he explained, buy tickets for the Vatican museums months in advance, at a cost of $50,000 to $60,000 a month, and resell them to their customers. If the tourists don’t come, the companies are not reimbursed. With cancellations extending until May, the unexpected financial burden risks crippling the agency, said Eslam.

The Italian newspaper Il Messagero reported this week that the Vatican museums have lost as much as 60% of their revenue in the past month, but Eslam suspects the number is much higher.

“Just 60%? If only! I think they are losing much more,” he said. “The museums are completely empty.”

In his nine years working at the tour agency, Eslam said he has never seen the number of visitors plummet as it has in recent weeks. “We had Isis, we had terrorists doing all sorts of things, we had the jubilee,” he said, referring to the Catholic Church’s Year of Mercy in 2016, which brought smaller crowds than vendors had hoped. All the things that happened and ruined tourism,” he said. “But never, never, have I seen something like this.”

The only visitors still coming for the tours are from China and Japan, apparently not afraid of contracting the virus in Italy, Eslam said. “I guess they say, ‘it can’t be worse!’”

The few who brave the coronavirus outbreak are getting a rare opportunity of seeing the Vatican’s attractions without crowds — “once in a lifetime,” said Eslam. Visitors can get up close to Raphael’s work, experience the beauty of the Sistine Chapel in eerie silence and pose for selfies in front of ancient Greek masterpieces without fear of interruption.

James Livick-Smith and Jessica Drew, visiting from the U.K., were among the few who took an empty flight to see the abandoned sights. They told RNS that even though there were people wearing masks inside and rubbing Purell on their hands, they “were not afraid to come to Rome.”

“If you look at the facts of it, it doesn’t seem so scary. The flu is more dangerous,” they said.