Staff meetings are abuzz with this question today.

Of course, that’s almost always a local decision, in consultation with your state health department and in awareness of what’s going on around you.

It’s on the mind of churches because major events and gatherings all over the world have been canceled. We want to gather as a faith community, particularly in times of tumult.

This is good and healthy.

Sometimes love tells us that perhaps for a season we must forsake the gathering together of the saints because of our love for our neighbor.

We know that meeting together could cause harm to people in our congregations, our communities and our world.

We know for example, that if the coronavirus spreads, older adults and those with serious chronic medical conditions like heart disease, diabetes and lung disease are at greater risk.

Look around your congregation.

Likely, you have people who fall into this category. Even if it seems as though everyone is healthy, the reality is that you may not know for sure.

Our job as church leaders and as a family is to take care of those at risk among us.

In Kentucky and in the Pacific Northwest, government leaders have asked churches to close. That request may soon be widespread.

But the question still remains for many — why can’t we just meet and trust God?

Because of something medical experts call “social distancing” — intentionally avoiding gatherings where healthy and infected people may mix. Limiting major gatherings is an effective tool we can use to care for our communities by limiting the spread.

The Centers for Disease Control and Prevention defines social distancing as “remaining out of congregate settings, avoiding mass gatherings, and maintaining distance (approximately 6 feet or 2 meters) from others when possible.” The purpose is to slow down the spread of the illness by limiting its opportunities to infect healthy people.

The reasoning behind social distancing is in part, as The New York Times reported, to “flatten the curve” of the epidemic. Doing so, The Washington Post reported, can slow the rate of infection to ensure that the health care system and other vital social services aren’t overloaded with a flood of new patients.

It is about slowing the rate of disease spread — which happens much faster when we gather together. A graphic from the CDC illustrates. 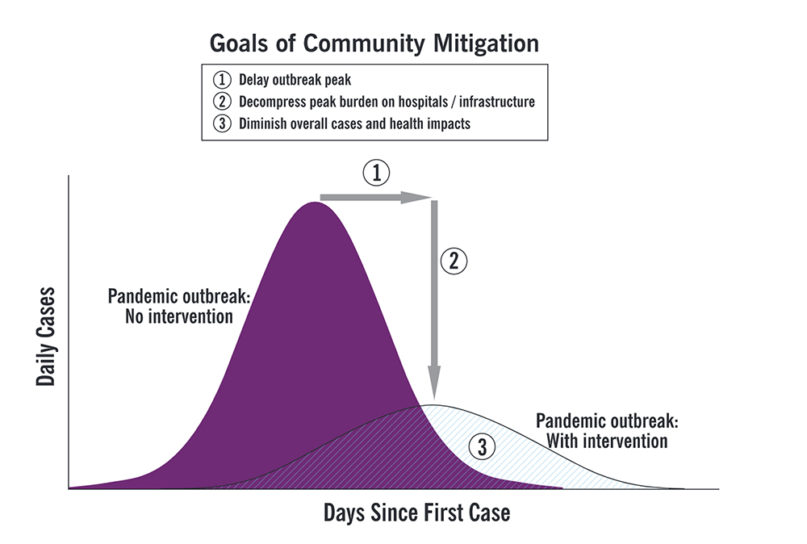 A 2007 analysis by Drs. Richard J. Hatchett, Carter E. Mecher and Marc Lipsitch provides a powerful outline of the different approaches and their consequences from two cities in the 1918 Spanish Flu pandemic:

“The contrast of mortality outcomes between Philadelphia and St. Louis is particularly striking. The first cases of disease among civilians in Philadelphia were reported on September 17, 1918,” according to the report, “but authorities downplayed their significance and allowed large public gatherings.”

By the time social distancing was implemented a few weeks later, the disease had “already begun to overwhelm local medical and public health resources.”

In St. Louis, social distancing was implemented soon after the first cases were reported, dramatically reducing the spread of the disease. As the report concluded, the difference of roughly 14 days in response times represented “approximately three to five doubling times for an influenza epidemic.”

Church leaders face a similar challenge of caring for their people even when it might require difficult decisions of suspending events or gatherings.

For many Christians, the very concept of not gathering as the people of God is unacceptable. And yet even in a time like this, we can find gratitude. We live in a time when technology allows us to stay connected in ways once unimagined.

Cellphones allow us to stay connected, videoconferencing and livestream allow us to stream out sermons. What would it look like, for instance, to:

If we have to not meet for a while, it won’t last forever.

God will bring us back together, stronger and more on mission than ever. And while we are not meeting, we can engage our neighbors — checking on them, particularly those most vulnerable to this disease.

Listen to your health department. See what your local schools do. Consider the age of your congregation. And then, decide accordingly.

We love gathering in person — with feet and faces — but for now, we may best love our neighbor by gathering via electrons and avatars.

Laurie Nichols contributed to this article.

(Ed Stetzer is the executive director of the Wheaton College Billy Graham Center, which just launched CoronavirusAndTheChurch.com in partnership with Saddleback Church and the Humanitarian Disaster Institute.  The views expressed in this commentary do not necessarily represent those of Religion News Service.)