(RNS) — The envelopes Howard Shulman carried into the Catholic Diocese of Raleigh contained dozens of printed black-and-white photos of all sizes.

There were images of St. Peter’s Square, of Swiss guards stationed outside the Sistine Chapel, of white smoke billowing out of the roof signaling a pope had been elected, and of the new pope sitting on his throne.

All dated 1939, the photos, plus a folder stuffed with negatives, document the coronation of Pope Pius XII, elected just six months before the outbreak of World War II. They were shot by Samuel (Sammy) Schulman, a professional photographer from New York City who worked for International News Photos, which later came under United Press International (UPI). 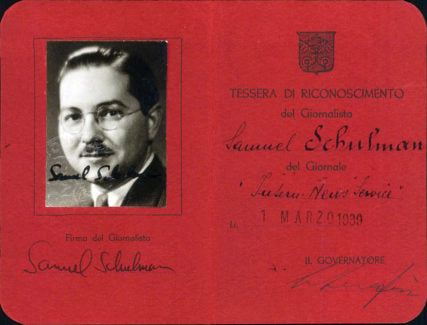 Schulman, who was Jewish, was the only U.S. photographer credentialed by the Vatican to cover the coronation of Pope Pius XII.

When he died in 1980, Schulman’s photos came into the possession of his son-in-law, Howard Shulman, who is also Jewish.

Shulman didn’t know it at the time, but his choice to donate the photographs came just as Pius XII was coming back into the spotlight.

Last month, the Vatican announced March 2 as the date it would open its archives and allow researchers to scrutinize the archives of Pius XII. (The opening has now been pushed back to April due to the coronavirus pandemic.)

For decades, the Catholic Church has been fighting perceptions that the wartime pope was publicly silent about the murder of six million Jews during the Holocaust. Critics have argued he also did little behind the scenes to stop Nazi atrocities. His supporters insist that after the Nazi invasion of Italy he secretly ordered Catholics all over Europe to hide Jews in churches, convents and monasteries.

The archives, it is hoped, may help shed light on his motivations.

Shulman, who was 92 and widowed last year, has no bone to pick in the ongoing controversy over Pius XII’s wartime conduct. 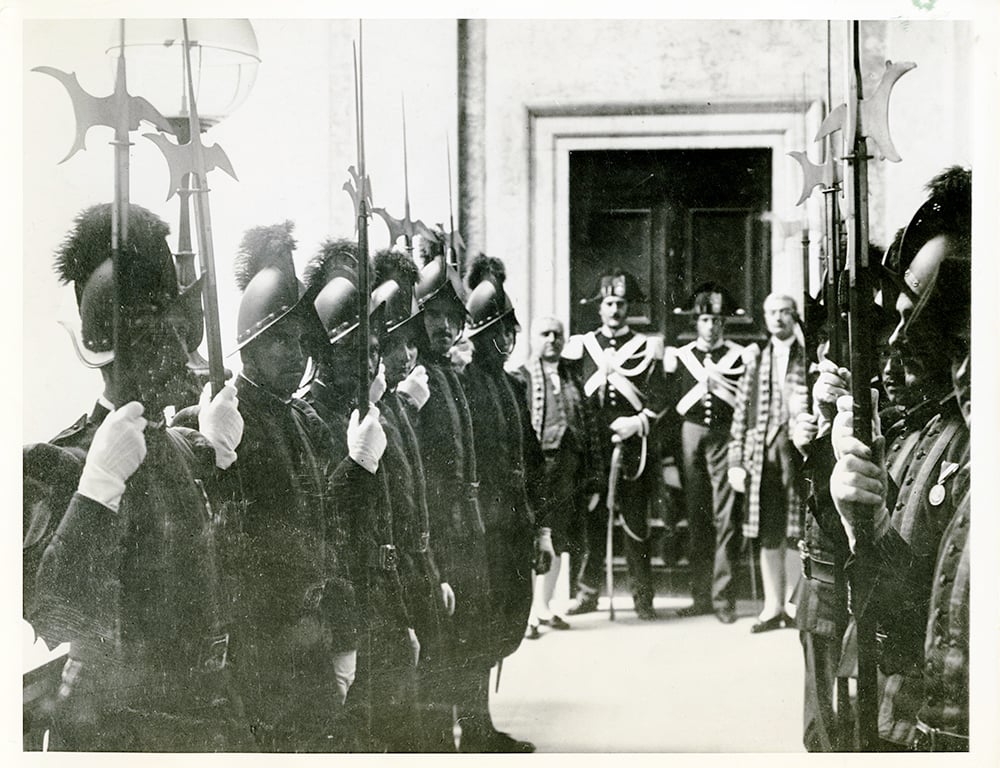 Swiss Guards surround the Vatican quarters where the voting cardinals reside during the election of the 262nd pope in 1939. Photo by Samuel Schulman, courtesy of Howard Shulman and the Diocese of Raleigh

A few months ago, he was packing his Cary, North Carolina, home to move into an independent living complex and wanted to downsize his father-in-law’s collection. He had called a few Catholic churches to ask if they’d be interested in the photos, but nothing came of it. Then he called the Diocese of Raleigh where the communications team was eager to see the photos.

“I decided to donate it to somebody who would cherish it,” said Shulman. “They were very excited.”

The retired insurance agent and broker said he feels good about the donation and hopes the diocese may put the rare photos to good use.

“There’s too much hate between religions,” he said. “Everybody has a right to his own way of believing. I think this is a step in that direction.” 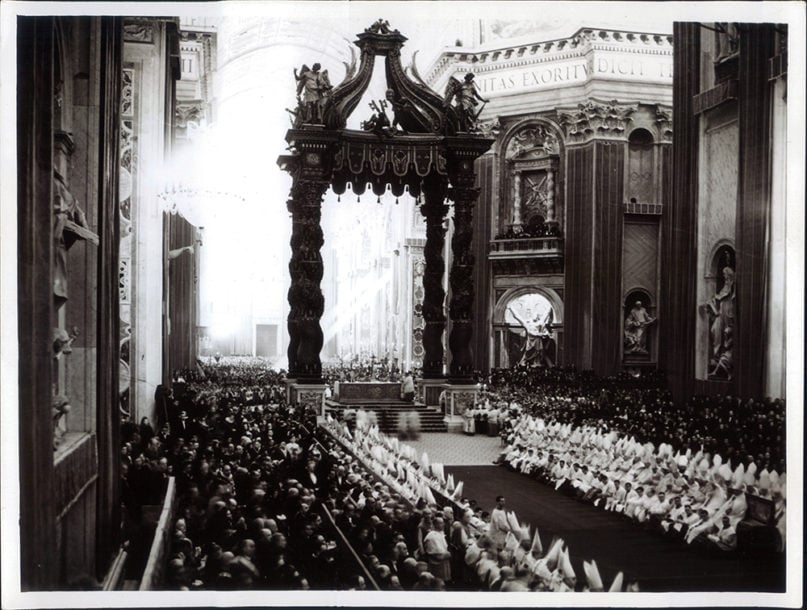 St. Peter’s Basilica during the coronation of Pope Pius XII. Photo by Samuel Schulman, courtesy of Howard Shulman and the Diocese of Raleigh

What’s more certain is that the opening of the archives will also reopen the discussion over the Catholic Church’s relationship with the Nazis, and, by extension, the Jews.

The issue is important because depending on what those archives reveal, it could advance or put to rest the effort to canonize Pius XII as a saint — a process some Catholics have been pushing since 1965. 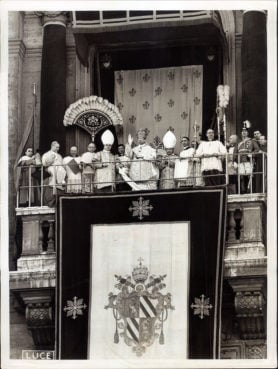 Pope Pius XII blesses Vatican City during his coronation on March 12, 1939. Photo by Samuel Schulman, courtesy of Howard Shulman and the Diocese of Raleigh

Before he became pope, Eugenio Pacelli was the papal nuncio to Germany and later the Vatican’s secretary of state, responsible for foreign policy. He concluded dozens of treaties between the Vatican and various countries, the most famous being the 1933 Reichskonkordat.

That agreement allowed Catholic churches in Germany certain autonomy — to administer the sacraments and to name bishops and pastors. In return, it stipulated that priests could not engage in political activities or hold public office. Indeed, it required bishops to swear an oath of loyalty to the Reich.

The agreement was criticized for giving Hitler legitimacy soon after becoming chancellor of Germany. It also had the effect of silencing Catholic disagreements with the Nazi party and muzzling protests or social justice actions.

But that does not mean Pius XII was a Nazi sympathizer, scholars say. In fact, research has shown Pius XII thought the Nazis — and even more so, the communists — were a threat to the church and the stability of Europe.

Still, Pope Pius XII never mentioned the persecution of the Jews. In his 1942 Christmas radio broadcast, the pope made some generalizations about “humanity’s obligation to the hundreds of thousands of persons who without any fault on their own part, sometimes only because of their nationality or race, have been consigned to death or to a slow decline.”

Some understood that as an oblique reference to the Jews. 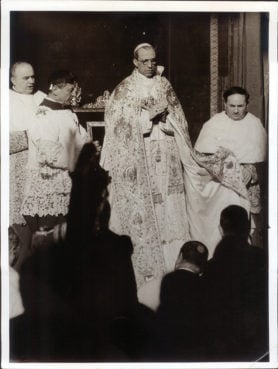 The coronation of Pope Pius XII on March 12, 1939. Photo by Samuel Schulman, courtesy of Howard Shulman and the Diocese of Raleigh

“I think the pope had been warned that if he spoke out on some things, he would make things worse,” said the Rev. Gerald Fogarty, professor emeritus at the University of Virginia who has studied the Vatican archives from during the war period.

But even after the war — Pius XII died in 1958 — he never spoke about the Holocaust or the church’s role in it.

Still, Pius XII was probably not the anti-Semite some have portrayed him to be, said Massimo Faggioli, who teaches theology at Villanova University.

“I don’t believe he behaved in a way that was significantly different from the way Catholics behaved in those years,” Faggioli said. “He was one of them. He was very limited in his understanding of the Jewish question.”

It was only in 1965 that the Catholic Church changed its approach to Jews, notably in its famous document Nostra Aetate, Latin for “In Our Time.” The declaration rejects the charge that the Jews are responsible for Jesus’ death, an accusation used for centuries to justify the persecution of Jews.

In 1998, the Vatican went further and apologized for its inaction during the Holocaust. Two years later, St. John Paul II visited Israel, met with Holocaust survivors and said he was “deeply saddened by the hatred, acts of persecution and displays of anti-Semitism directed against the Jews by Christians at any time and in any place.”

Moving beyond the past 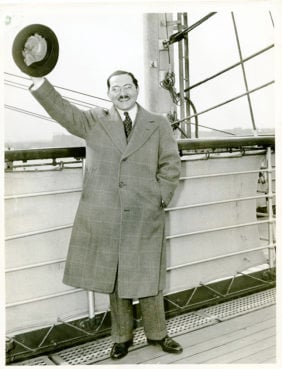 Photographer Samuel Schulman aboard the S.S. Rex as he sails to Rome in February 1939 to cover the election of the 262nd pope on the throne of St. Peter. Photo courtesy of Howard Shulman and the Diocese of Raleigh

Sammy Schulman likely had no clue who would be chosen as the new pope when he was asked to go to Rome following the death of Pope Pius XI on Feb. 10, 1939.

“That’s a great assignment for a rabbi’s son,” Schulman reportedly told his editor.

In a few of the photos donated to the Raleigh diocese, Schulman is grinning at the camera and waving his hat as he stands on the deck of the S.S. Rex, the ocean liner that would take him from New York to Italy. While on the ship, he shot photos of a Mass for Pope Pius XI while world-famous tenor Beniamino Gigli sang “Ave Maria.”

By the time he got to Rome, Schulman was well regarded as a photographer to President Franklin Delano Roosevelt. In his autobiography “Where’s Sammy?” he said he shot some 5,000 photos of the president.

His son-in-law described the photographer as an adventurer and  a raconteur. He was in his element in Rome, reportedly waking at 4 a.m. to dress in a tux for the installation ceremony of Pius XII before returning home to Queens. Years later he would shoot photos of the 1959 Cuban Revolution — one of which is in the permanent collection of the Museum of Modern Art.

Shulman (who spells his name without a “c,”) fell in love with Schulman’s daughter Barbara when she was still a child (the Schulmans and Shulmans used to vacation together in upstate New York). Howard and Barbara married and had four children. After nearly 65 years of marriage, Barbara died in June. 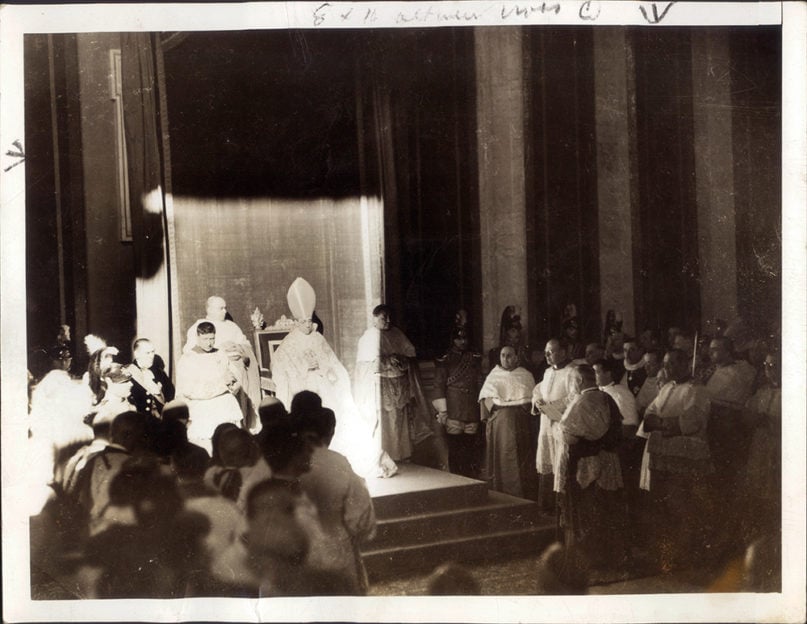 The coronation of Pope Pius XII on March 12, 1939. Photo by Samuel Schulman, courtesy of Howard Shulman and the Diocese of Raleigh

During their life together, the couple had many Catholic and Protestant friends and neighbors. They traveled all over the world, taking 33 cruises, starting with their honeymoon. In his study, Shulman has an illustration of the Cologne Cathedral drawn from musical notes.

He remains hopeful that Catholics and Jews can move beyond their painful past.

“The people I dealt with at the diocese — there’s no friction whatsoever,” Shulman said. “It’s history. You don’t write history out of the books. But you don’t have to live it forever. You just have to make sure you don’t repeat it.”

Of his own donation, he added: “I think this is one way of not repeating that history.” Smoke rises from the Sistine Chapel during the election of Pope Pius XII in 1939. Photo by Samuel Schulman, courtesy of Howard Shulman and the Diocese of Raleigh