LOS ANGELES (RNS) — Catholics seeking standard Sunday services were met with something new this past weekend.

At the Cathedral of Our Lady of the Angels, the mother church of LA’s Archdiocese, church bells tolled over deserted streets and an empty plaza on Sunday (March 15).

In lieu of the typical door greeter, visitors were met with health advisory signs and a stack of flyers titled, “Prayer in the Time of the Coronavirus.”

Inside the sanctuary, fewer than 100 people gathered in a space that can fit 3,000. Before the Mass began, an usher walked the aisles and whispered that the offertory bowl would not be passed around in an effort to avoid the spread of germs. In its place, a lonely basket sat in the center of the aisle for people who wished to drop their gifts.

“Health is on everyone’s minds during this pandemic,” he said, his voice echoing through the mostly empty church. “Health is important, but as Christians, we cannot forget that we are truly children of God destined for eternal life. This is why Jesus reminds us over and over again in the Gospels: Do not be afraid.” 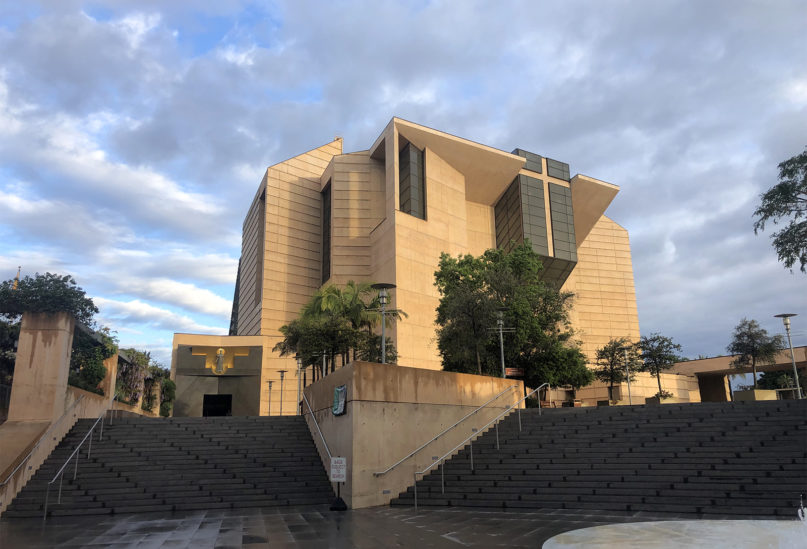 The typically bustling plaza at the Cathedral of Our Lady of the Angels sat empty ahead of Sunday morning Mass, March 15, 2020, in Los Angeles. Photo by Hayley Smith

But people are afraid.

News reports of the deadly virus have occupied the media for days on end. The WHO’s latest numbers declared 118,000 diagnoses across 114 countries and 4,291 dead. In Italy, home of the Vatican, the disease has spread so quickly that there is a national quarantine, and Catholics seeking reassurance from the Pope have instead found announcements of closures and cancellations.

Like most people across the world, the parishioners at Our Lady of Angels were looking for answers at a time when few answers exist.

“I never lived through 9/11 or polio or any of those things,” said 17-year-old David Boneta after the 8 a.m. Mass. “Those aren’t things that ever even occurred to me. Coronavirus is the only real thing, and it’s scary.”

Across town at Our Mother of Good Counsel in Los Feliz, the atmosphere before the 10 a.m. Mass was similarly unsettled. Ushers collected offerings while wearing face masks, and parishioners pumped hand sanitizer into their palms from dispensers in the aisles.

Like Gallardo, the Rev. Mark Menegatti began his service by addressing the concerns of the crowd.

“Archbishop José Gomez has granted dispensation to all Catholics in the Archdiocese from the obligation of attending Mass this week, next week, or the week of March 28 and 29,” he said, referencing a letter published by Gomez on Friday. 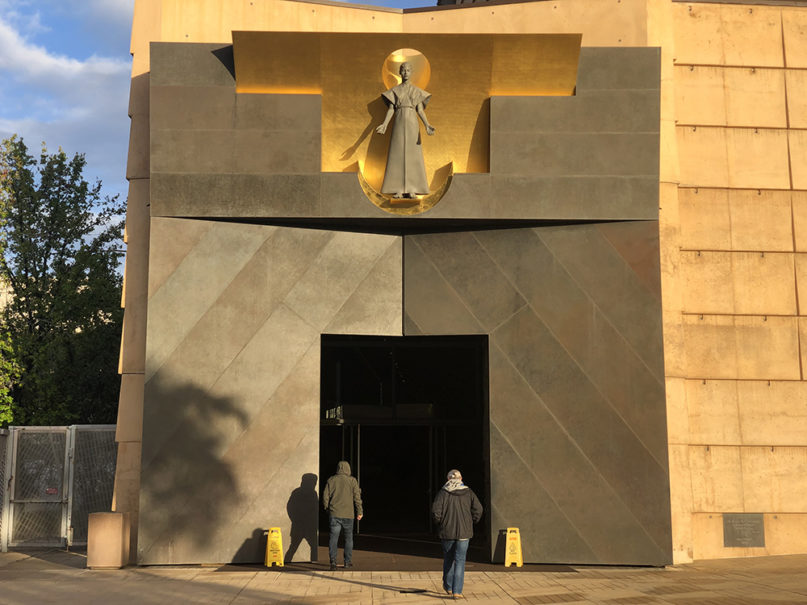 Only roughly one hundred people attended Mass at the 3,000-capacity Cathedral of Our Lady of the Angels in downtown Los Angeles, Sunday, March 15, 2020. Photo by Hayley Smith

Almost all churches in Los Angeles are following Gomez’s orders, which include eliminating the communal chalice and avoiding any direct bodily contact. When Menegatti’s Mass reached the moment of communion, parishioners lined up and cupped their hands to catch the hosts instead of taking them on their tongues.

“It feels apocalyptic,” said parishioner Sal Lopez after the service at Good Counsel. “It was so empty in there.”

His friend, Tomás Olmos, said he hasn’t felt this way in years.

“Every generation has their apocalyptic challenge,” Olmos said. “The atomic bomb, the AIDS scare, the swine flu, the Cuban missile crisis — there has always been some catastrophic thing threatening each generation. The best thing we can do at this time is pray and keep the faith.”

The Bible is rich with passages about sickness and compassion, including directives to “heal the sick” (Matthew 10:8) and provide for those who are suffering. “Is anyone among you sick?” reads James 5:14. “Let him call for the elders of the church, and let them pray over him.”

Still, the highly contagious nature of the virus has left many people grappling with questions of obligation and faith. How does one help the sick when it might mean endangering the lives of others?

Lopez said he thinks that instead of isolating people, the virus could help bring people together.

“Spiritually, it’s kind of nice for all of us to take this moment to pause,” he said.

“If you go down by the (Silver Lake) reservoir, you’ll see a lot of families together,” she said. “The whole tribe. Students are coming home from college, and people are gathering and spending time with their families because there’s nowhere else to go.” Parishioners at Our Mother of Good Counsel cupped their hands to catch the hosts without making physical contact, Sunday, March 15, 2020, in Los Angeles. Photo by Hayley Smith

At Our Lady of Angels, Gallardo also searched for deeper meaning. He read a passage from the Gospel of John in which Jesus asks for water from a stranger.

He used the story to remind parishioners of both their humanity and their glory.

“The real human needs that we have — thirst, food, shelter, education, a job, leisure — all of these things are important,” he said, “and we feel them when we don’t have them. The problem comes when we let these worldly concerns overwhelm and blind us to the deeper thirst, to the need for God.” 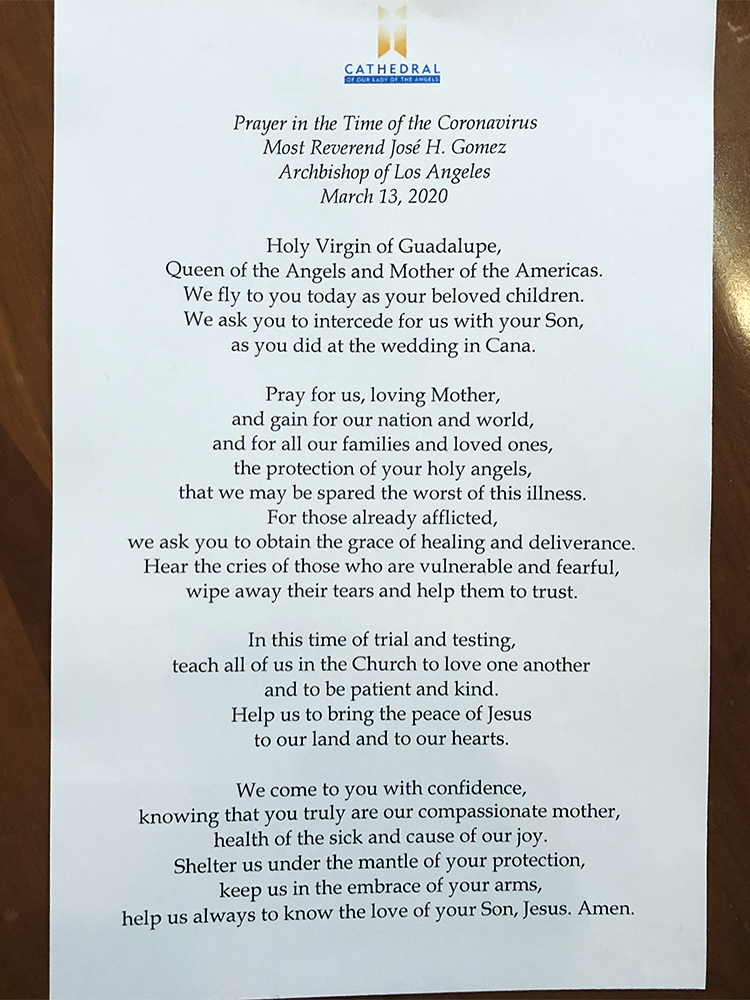 Flyers with the “Prayer in the Time of the Coronavirus” were handed out at the Cathedral of Our Lady of the Angels in Los Angeles. Photo by Hayley Smith

Gallardo then led the room in a recitation of “Prayer in the Time of the Coronavirus,” which was written by Archbishop Gomez.

“In this time of trial and testing, teach all of us in the church to love one another and to be patient and kind,” the prayer said. But the room felt quiet, even as one hundred voices spoke.

After the service, people shuffled out quickly and quietly. Most didn’t linger or stop to chat, but one couple moved slowly and appeared shell-shocked.

“That was so empty,” said Frank Masterson. “There are usually many, many more people in there.”

His wife, Caren, said it’s a frightening and confusing time. She’s struggling with the question of what can be done for the sick and how far people of faith should go to help them. One of her friends relies on an oxygen tank, and just yesterday he told them he thinks he has the virus.

“We weren’t sure what the right thing to do was,” she said.

The couple debated about whether to offer to drive their friend to the hospital, which could mean putting themselves or others at risk of getting sick. Ultimately, they decided against it.

“I think the best thing we can do for him is pray,” she said.