VATICAN CITY (RNS) — Over the past 2,000 years, the Catholic Church has weathered wars, natural disasters and plagues.

As Italy faces one of its gravest challenges in recent years in the coronavirus pandemic, the church’s rich history contains lessons about how to live out the Catholic faith in times of crisis.

Among those lessons: how to hold papal Masses without the faithful during Holy Week and Easter.

Last week, the Prefecture of the Pontifical Household announced that it would no longer be selling tickets to the Holy Week celebration in St. Peter’s due to the coronavirus pandemic.

As of Tuesday (March 17) there have been 26,062 cases of the coronavirus in the peninsula, where the disease has had the second-largest outbreak worldwide, claiming 2,503 lives in total, 345 more than the previous day.

For many Catholics in Rome and globally, attending Holy Week Masses in St. Peter’s with the presence of the pope is a yearly activity. The prospect of those being canceled seems unprecedented.

But celebrating Easter with the pontiff, or any papal Mass actually, is a far more recent practice.

“From the 15th century forward, papal Masses were said in private in the Sistine Chapel or the Cappella Paolina during Holy Week,” said Gregory DiPippo, an expert on Catholic old rite liturgies and editor of the New Liturgical Movement, in an interview with Religion News Service. A Catholic worshipper using protective gloves prays with a rosary at the Santa Maria de Cana parish in Pozuelo de Alarcon, on the outskirts of Madrid, on March 15, 2020. (AP Photo/Bernat Armangue)

Papal ceremonies, he said, were “so rich and complicated” that it was difficult to incorporate the faithful. Masses until after the Second Vatican Council (1959-1969) were said in Latin and with the celebrant facing the altar.

The papal Masses for Easter, Christmas and the feast of Sts. Peter and Paul were so rich in symbolism and ritual that they were held in private for the most part, with the only exception of the diplomatic corps, in the Sistine Chapel or the nearby Cappella Paolina.

“So public papal Masses are not such a long-standing tradition,” DiPippo explained.

DiPippo noted that “there is no precedent for Easter being postponed,” adding that “the liturgical year goes on.”

In the 1960s Pope John XXIII, often called “The Good Pope,” introduced the idea of  celebrating these papal Masses with the faithful present.

During Lent, John XXIII began to celebrate Mass in the Roman parishes he visited.

His successor, Pope Paul VI, was the first to eliminate the constraints that impeded the participation of regular Catholics in the Mass.

He required clergy to no longer celebrate Mass in Latin, so that everyone could understand. He adjusted the liturgy so that the priest would be facing the congregation and not the altar. He stopped wearing the papal tiara and cut the 30-foot-long trains worn by cardinals.

Paul VI  took out “much of the papal ceremony,” DiPippo said.

This cleared the way for a celebration that included all believers standing in the pews, so they could not only attend Mass but also understand it and participate in it.

Before then, popes would preside over Masses but would not celebrate them.

On March 7, 1965, Paul VI became the first pope in recent memory to personally administer Communion to the faithful. This led to the practice of celebrating the most important feasts of the Catholic Church in the presence of the pontiff in St. Peter’s.

Paul VI also began the tradition of televising papal Masses in 1967, allowing millions of Catholics to participate from their homes. 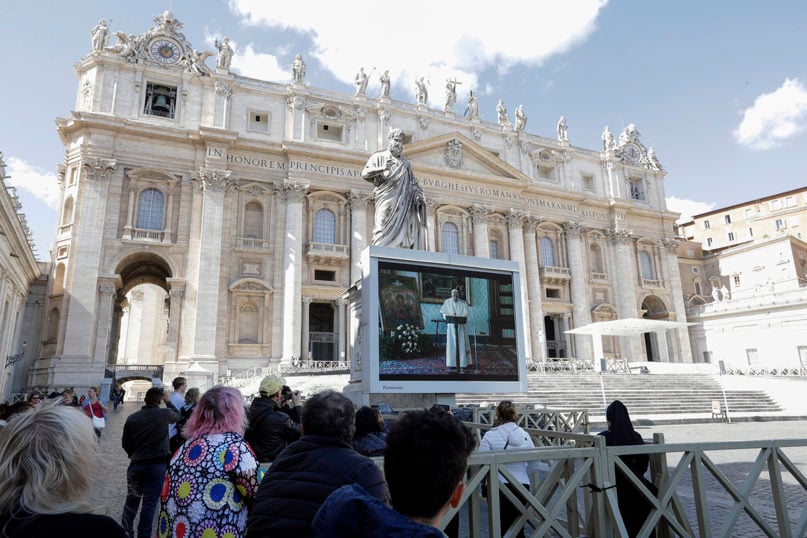 Faithful watch Pope Francis deliver the Angelus prayer on a giant screen to avoid crowds gathering, in St. Peter’s Square at the Vatican on March 8, 2020. In his streamed remarks, the pope said he was close in prayers to those suffering from the coronavirus and to those caring for them. (AP Photo/Andrew Medichini)

In his livestreamed Masses, Pope Francis has used his digital pulpit to send messages of hope and perseverance to faithful and members of the clergy.

“Let us also pray to the Lord for our priests, so that they have the courage to go out and go to those who are sick, bringing the strength of the Word of God and the Eucharist and to accompany health care workers and volunteers in the work they are doing,” he said during his morning Mass at the Domus Sanctae Marthae on March 10.

Inspired by the words of the pontiff, many priests throughout Italy have found other ways to continue their ministry. A notable example is the Rev. Fabio Stevenazzi, in the northern area of the peninsula where the coronavirus has struck the hardest.

The priest exchanged his collar for a hospital gown, to offer his help as a doctor, a profession he exercised before entering the seminary.

Masses have for the most part been banned in the country, in an effort to reduce contagion.

That’s happened in the past, said DiPippo.

“There have been times when there was a need to scale back the sacraments,” DiPippo said.

Some clergy in the past have found ways to still be present even during health crises.

Perhaps the most well known is St. Charles Borromeo.

Borromeo was archbishop of Milan during the great plague that hit the city between 1576 and 1577, which historians believe nearly halved the city’s population. Today, the area surrounding Milan is among the epicenters of the coronavirus pandemic, with as many as 300 people dying every day.

In August 1576, news of people dying in nearby towns because of the plague began to reach Milan.

Borromeo was among the first to take the threat seriously. When panic struck the city he stayed behind, unlike the many princes and nobles who fled. He catered to the sick, renovated hospitals and began something akin to a crowdfunding campaign.

Borromeo brought the sacraments to the homes of quarantined people and enacted prevention measures. 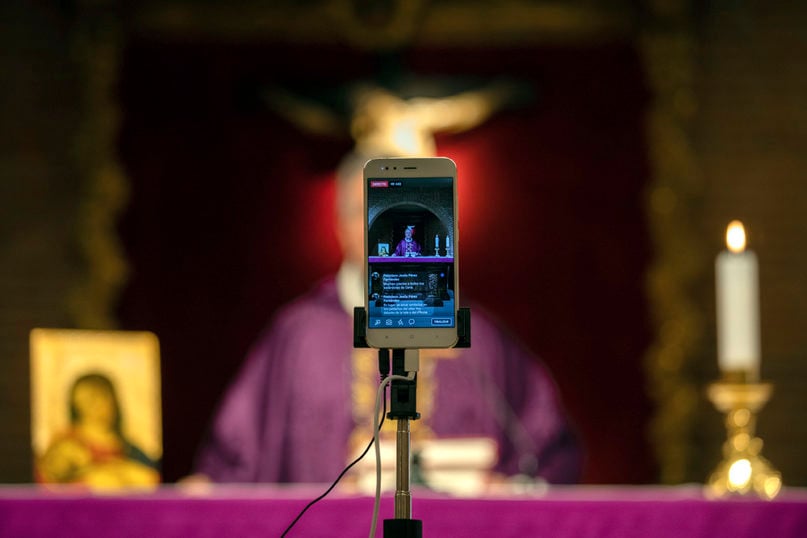 The Rev. Jesus Higueras, a Catholic priest from the Santa Maria de Cana parish, is seen on a smartphone during a livestreamed Mass in Pozuelo de Alarcon, on the outskirts of Madrid, on March 15, 2020. Pope Francis has praised people for their continuing efforts to help vulnerable communities, including the poor and the homeless, amid the coronavirus pandemic. (AP Photo/Bernat Armangue)

For the archbishop, merely physical efforts to fight the disease were not enough to combat what he believed to be a divine punishment, which required a spiritual response.

Against the demands of civil authorities, he organized processions, which he led barefoot throughout the deserted city.

“At the time, they didn’t know how virus spread,” DiPippo explained, but Borromeo found other ways to bring the Catholic faith to people’s homes. “He had the priests go out to public places where people were able to follow Mass from their windows and balconies.”

Still today, the main squares and arteries of Milan show the “Crocette” — stone pillars with crosses on top, where brave priests said Mass for all to hear. Through safety measures and faith, Milan survived the plague until its end in 1577.

Twenty-six years after his death, Borromeo was made a saint by Pope Paul V.

The images that spread on Sunday of Pope Francis walking in the deserted city center of Rome inspired many in Italy. He walked to the Basilica of St. Mary Major, dedicated to the Virgin Mary, and to the Church of San Marcello al Corso, home to a sacred cross believed to have cast away the plague in Rome in the past.

He talked about visiting the cross in an interview with the Italian newspaper La Repubblica:

“I asked the Lord to stop the epidemic: Lord, stop it with your hand.”