(RNS) — America is a byword for freedom: freedom of speech, religion, assembly, the press. And because of those freedoms, we have traditionally enjoyed one of the world’s most diverse and tolerant societies. People of different views, faiths and persuasions are friends and neighbors who live together in peace. This is thanks in large part to the First Amendment, the genius of which is respect for each person’s human dignity.

Power over things like expression and religious views is limited to persuasion, and that forces all of us to think critically, defend our ideas and consider others’ perspectives — even those we think are terribly wrong.

But American culture has been shifting. Changing hearts and minds can be difficult. Activists are turning to brute force instead. So it should come as no surprise that the First Amendment cases on the Supreme Court’s docket of late boil down to whether the government can force its views on citizens.

High court cases that have made headlines recently have concerned forcing devout employers to provide drugs capable of ending human life (Hobby Lobby, Little Sisters of the Poor, March for Life), shutting out parents if they work through foster agencies that recognize marriage is between one man and one woman (Fulton), or punishing a cake artist who declines to create certain custom messages or participate in sacred events that violate his religious beliefs (Masterpiece Cakeshop). In each of these, the same question arises: Must the state treat differing beliefs, consciences and views respectfully and with equal dignity?

If our freedoms and pluralistic society are to survive, there can be only one answer: We must stop treating those with whom we disagree like enemies and allow every voice to be heard.

America is a nation where everyone should be free to speak their minds and honor their deepest convictions without fear of government punishment or retribution. Otherwise, we are no better than countless nations whose dissidents have fled to our shores for these very freedoms.

We have forgotten this lesson before. As the Nazis were about to overrun France, a case involving two Jehovah’s Witness schoolchildren reached the Supreme Court. Lillian and William Gobitas (misspelled Gobitis in official documents) refused to salute the American flag or recite the Pledge of Allegiance. They took a strict view of the Ten Commandments and refused to take an oath to anything but God.

Their neighbors did not understand and ejected them from the public schools. The Supreme Court ruled 8-1 against the children, and afterward, Jehovah’s Witnesses faced intense backlash from coast to coast: Their halls were looted and burned, whole families were run out of town. Law enforcement for the most part did nothing, thinking that the Supreme Court had declared them traitors. 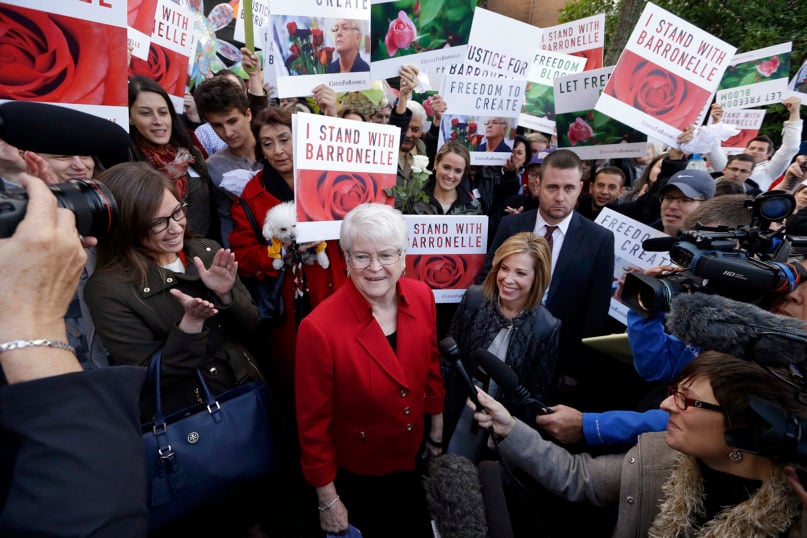 Barronelle Stutzman, center, a Richland, Washington, florist who was fined for denying service to a gay couple in 2013, smiles as she is surrounded by supporters after a hearing before Washington’s Supreme Court on Nov. 15, 2016, in Bellevue, Washington. Stutzman was sued for refusing to provide services for a same sex-wedding and says she was exercising her First Amendment rights, but justices questioned whether ruling in her favor would mean other businesses could turn away customers based on racial or other grounds. (AP Photo/Elaine Thompson)

Today’s cases look different, but the dangers they invite are the same. Consider Arlene’s Flowers v. Washington, which awaits a decision as to whether it will be heard by the Supreme Court.

Barronelle Stutzman is a floral design artist who loves and serves everyone at her small shop in Richland, Washington. For nearly 10 years, she developed a lasting friendship with Robert Ingersoll and created dozens of innovative floral arrangements celebrating major events in his life, including Valentine’s Day and anniversary gifts for his partner, Curt Freed.

But when the couple decided to marry, Barronelle was faced with a difficult choice: betray her religious convictions or disappoint a friend. Barronelle took her friend Robert aside, told him how much she loved him and explained that she could not create custom arrangements for, or participate in, the ceremony. She referred him to three floral design studios nearby.

Barronelle’s compassionate response is exactly what our society needs right now. But government officials are often more interested in shaming those with whom they disagree than respecting their freedom.

Washington state’s attorney general filed a one-of-a-kind lawsuit, bringing a consumer protection complaint instead of leaving the matter to the Washington Human Rights Commission and waiting for someone to file a complaint, as is usually done. The attorney general has also threatened not only Barronelle’s business, but, in a highly unusual move, has joined the ACLU in suing her personally as well.

The AG admits that Barronelle creates expression for a living but argues that the state can force her to create certain messages or even require poets to write odes consistent with the government’s marriage views. Barronelle has spent nearly seven years in litigation and as the object of public derision and death threats, all because she couldn’t speak a message or participate in a wedding ceremony her faith disbelieves.

Unless the Supreme Court steps in, people of good faith, like Barronelle, will lose not just their livelihoods and personal assets but will become pariahs, just like the Jehovah’s Witnesses who came before.

The court has not shied from righting such wrongs in the past. In Barnette, it eventually overruled its own decision against the Gobitas children, declaring that “no official, high or petty, can prescribe what shall be orthodox in politics, nationalism, religion, or other matters of opinion or force citizens to confess by word or act their faith therein.”

Freedom demands such limits. The Supreme Court should affirm that Barronelle’s religious view of marriage is honorable and that the government cannot punish her for her beliefs.

The alternative is that government bureaucrats will continue their relentless attacks on beliefs held as much by Muslims and Jews as by Christians. Freedoms are not a liberal or conservative issue. The government that supports your beliefs today may take the opposite position tomorrow based on public pressure or an election. If we want freedom of speech and religion for ourselves, we must extend those freedoms to all people, even those with whom we disagree. A win for Barronelle is a victory for all of us. 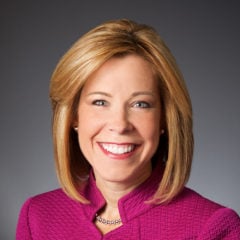 Merely enforcing the First Amendment’s free speech and free exercise guarantees does not “weaponize” them or pose a threat to civil society, as one recent commentator claimed. Quite the opposite: Protecting these freedoms is what has allowed our country to grow and flourish. The sooner the courts act to stop government officials from bullying those with whom they disagree, the sooner we can bring an end to cancel culture and the discord, mistrust and division it sows. If we want to see our diverse society survive, it is time to stop drawing lines between us.