LOS ANGELES (RNS) — Sabrina Maron, a Los Angeles transplant and member of the local Jewish community, filled her cart at the Whole Foods Market with all the fresh produce that wasn’t already picked over.

She was planning Shabbat dinner and meals for the week ahead.

“It looked like they were rationing onions,” she said while unloading her groceries. “So I just took a couple.”

Like many other concerned citizens around the country, Maron wanted to be prepared in anticipation of several weeks of isolation due to the COVID-19 closures sweeping across the country. She suspected her kids’ school at the local temple would soon close down.

“I got baking items, figuring that the kids and I would do more baking than usual,” Maron said.

But as people rush grocery stores and leave aisles empty in their wake, the emotions propelling them seem to have little to do with their beliefs about God, life and the afterlife.

“Politics has become religion to us,” said Ryan Burge, assistant professor of American religion of Eastern Illinois University. “So what our political leaders tell us is almost more important than what our religious leaders tell us.”

Burge looked at data about religion and fear and found that beliefs about the Bible, for example, did not seem to affect how people felt about the possibility of a pandemic.

“Being theologically conservative does not make anyone more or less afraid of a pandemic,” Burge tweeted earlier this week. “It’s a combination of theology and partisanship.”

A Quinnipiac University national poll of registered voters taken March 9 found that just over half of Americans (54%) were either very or somewhat concerned “they or someone they know will be infected with the coronavirus.”

While religious beliefs are known to affect political loyalties, they seem to have little to do with who’s stockpiling the toilet paper from Costco.

“It’s very hard to draw a straight line from, I believe X, therefore, I’m going to do Y,” said Nancy Ammerman, professor of sociology of religion at Boston University. “We’re not very consistent human beings. What we say we believe is not at all necessarily what leads us to act in any given way.” 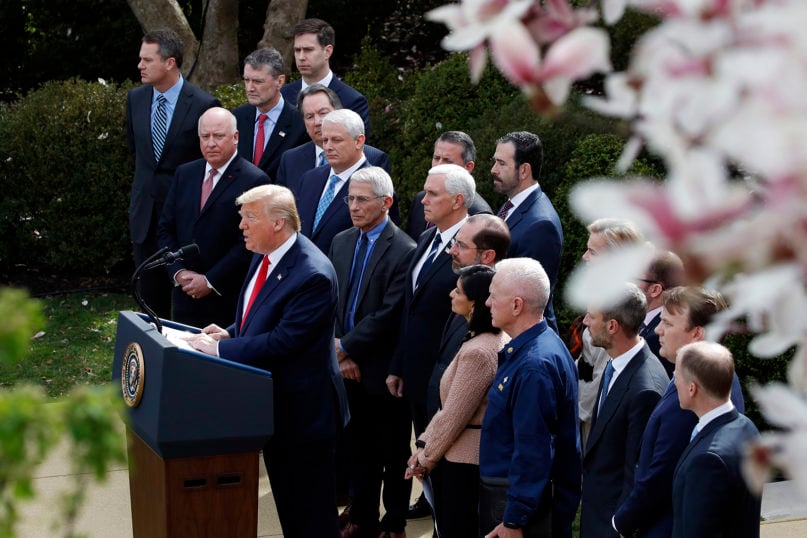 President Donald Trump speaks during a news conference about the coronavirus in the Rose Garden at the White House on March 13, 2020, in Washington. (AP Photo/Alex Brandon)

Melissa Petkov, who attends a Presbyterian church and is critical of the Trump presidency, has spent the past three weeks in self-isolation with her family of five in San Mateo County, California.

Her “ahead of the curve” response to the virus was based on information her investor husband obtained about China.

“He’s known for a long time this was going to be a big problem,” she said. “So when everyone else was very laissez-faire, he knew it was coming.”

Petkov’s religious beliefs stem from a childhood brought up adhering to the Bible at home, church and in her Christian school in North Carolina.

“My (faith) informs my every day because I rely on the strength that I derive from that on an hourly basis,” she said.

Chris Dunn, a fellow Presbyterian and a retired pulmonologist in San Mateo County, is taking the recommended precautions communicated by the federal Centers for Disease Control and Prevention.

“I’m not sick so I’m not wearing a mask out in public, and I wash my hands real frequently,” he said Friday afternoon (March 13). “And definitely we’re cleaning the surfaces.”

But despite being in a vulnerable age bracket, he did not let the COVID-19 crisis stop him and his wife from taking a Caribbean cruise with friends a week ago.

As for closing the local schools, Dunn, who falls on the conservative political spectrum, said it’s erring on the side of being extra cautious.

His faith seemed to have less influence over his actions than his close reading of CDC guidelines coupled with his own medical knowledge and political leanings.

Many churches have moved services online in response to calls by state and local officials and the CDC.

But some churches decided to hold in-person services despite calls for group meetings to shut down. Among them was First Baptist Church in Dallas, pastored by the Rev. Robert Jeffress, one of President Donald Trump’s evangelical advisers. 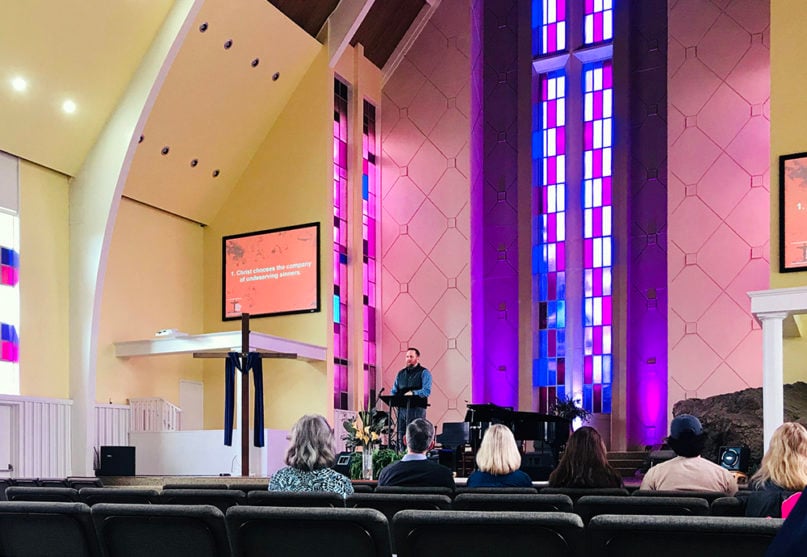 A Purell hand sanitizer station awaited people upon arrival to the church.

“God will protect us during this time,” the Rev. Ryan Johnson assured the few dozen people who attended the service, which featured prayers that worshippers not succumb to the panic and fear caused by the pandemic.

“We’re desiring to keep our doors open in a way in which we can love on others,” said Johnson. “We can’t please everybody, but we feel the peace of the Lord to use our church as a tool to serve our community.”

San Mateo County has allowed for religious exemptions to the 50-person gathering limit so long as people continue to practice social distancing and cleanliness guidelines.

Redwood Baptist leaders have since announced that services are being moved online.

“We want you to know, church, that we are staying up to date on everything that is going on with COVID-19,” Mykel Diego, the church’s youth pastor, said in a video. “And we want you to know that God is still on the throne and that he cares and is in control.”