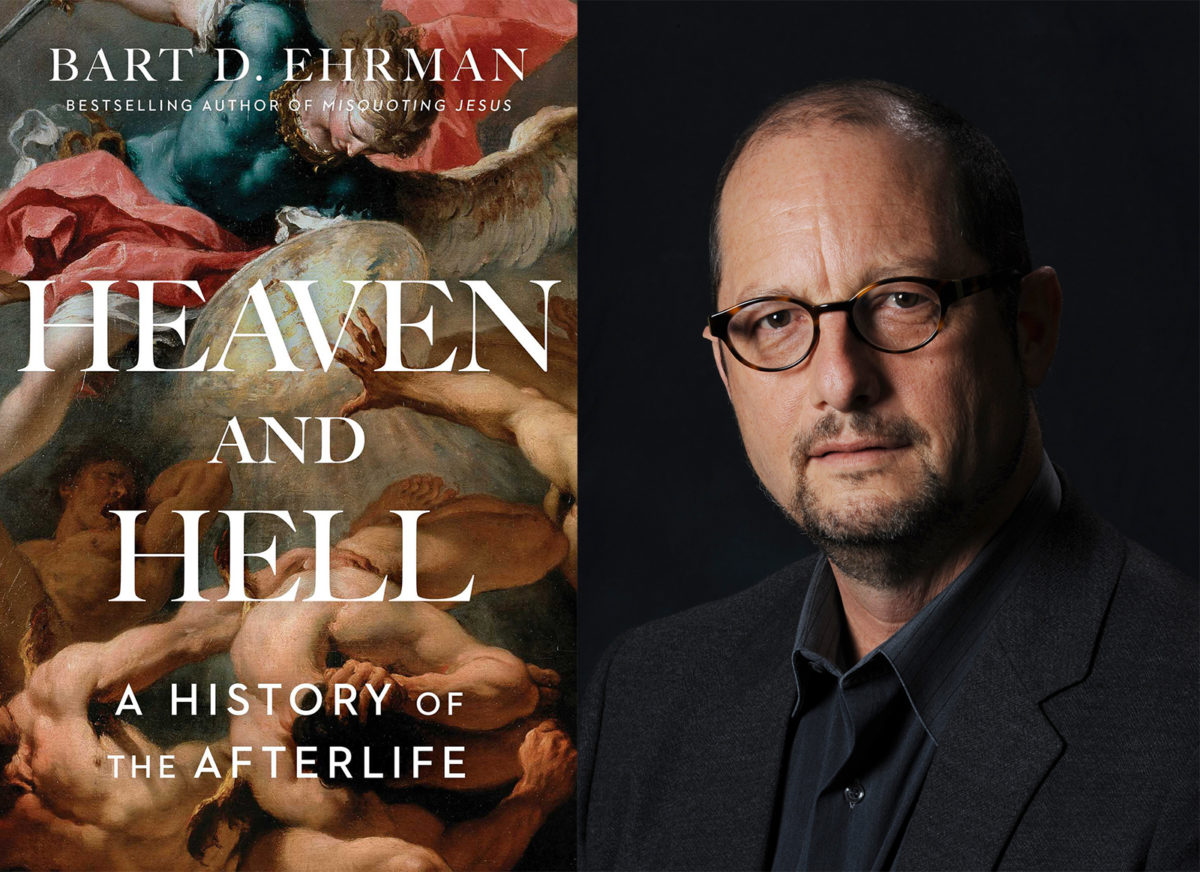 “Heaven and Hell: The History of the Afterlife” and author Bart Ehrman. Photo by Dan Sears/University of North Carolina at Chapel Hill
March 26, 2020
Yonat Shimron

(RNS) — With the novel coronavirus sweeping the nation, death is on everyone’s mind. Bart Ehrman’s new book, written before the pandemic, may offer the perfect antidote for settling the question of what comes after.

But whether “Heaven and Hell: The History of the Afterlife” is a balm or an irritant depends on the willingness of readers to challenge long-held beliefs.

In it, Ehrman, the celebrated New Testament scholar at the University of North Carolina at Chapel Hill, offers a comprehensive account of how Christianity adopted the view that saints and sinners will part ways at death and enter the everlasting hereafter in separate realms.

Best known for his popular books debunking the central assumptions of Christian Scriptures, Ehrman continues this quest in his latest book. He begins with some of the earliest surviving ancient Mediterranean texts and then examines Greek thought before finally, and methodically, mapping out how the early Jews and Christians were influenced by these ideas and how their thinking on heaven and hell evolved in relation to them and to historic events of their time.

Ehrman’s mastery of early Christian history is exhaustive, but his writing style is accessible and succinct.

His main point is that neither heaven nor hell was taught in the Old Testament, also known as the Hebrew Bible, and that Jesus himself did not subscribe to them in the way they are understood today. Heaven and hell are actually later developments.

Religion News Service spoke to Ehrman about the book, which goes on sale March 31. The interview has been edited for length and clarity.

A major point of your book is just how much the notion of heaven and hell evolved over time.

The thesis of the book is neither idea of heaven or hell is taught anywhere in the Old Testament and it’s not what Jesus taught.

The question is, why did this become the dominant view? At the time Christianity emerged most Jews didn’t believe there was a soul separate from the body. That idea came from the Greeks. Jews understood the soul as the breath. When you die, there’s no more breath. Jesus didn’t have any idea your soul would continue on because he didn’t believe there was an immortal soul.

Paul, like Jesus, was a Jew who thought there would be an eternal life for those who followed God but it wasn’t that your soul died and went to heaven. They believed in a resurrection of the dead. At the end of time, God would bring in a new kingdom on Earth, a bodily kingdom, and accompanying that is a resurrection of the dead. Those who died before this came would also receive it. They’d be raised from the dead. That’s what Jesus and Paul thought.

Paul realized in his later letters that he may die before the resurrection comes. He ended up thinking that surely since he’s so close to Christ, he’ll have a temporary body in heaven awaiting him when he dies, and then when the resurrection comes he’ll come back into his mortal body which will be made immortal.

This starts the idea that you can exist after death without your body. The people Paul was converting were gentiles who were raised on Greek thought and believed there was a soul that lasts forever. That’s the beginning of heaven.

That’s right. It’s because Jesus talked of the coming kingdom of God where the people who suffer for doing what’s right will be rewarded. Jesus talks about the people who aren’t rewarded with the kingdom of God and says they will be destroyed. He has parables about that. He’ll talk of (a farmer) separating the weeds from the good crop and he’ll burn the weeds in the furnace. That’s what it will be like for sinners — they’ll be burned. But the thing about weeds is that when they burn, they go out of existence. They’re gone. That’s what he thought would happen to people. They’d be gone. There was no idea of torment or punishment after death. The early Christians didn’t have that. It’s not until you start getting so many Christians raised in Greek culture that you have the idea that some will be rewarded and some punished.

Why was it necessary to develop the idea of eternal torment, rather than just death for sinners?

It was necessary because the premise of your soul going up to live in heaven was that the soul is immortal. It’s a Greek idea that was popularized mainly by Plato. By the first century, anybody in the Roman Empire thought the soul lived on. If you transfer the idea that the soul lives on after death into the idea that God will reward or punish people, then if he’s punishing people he’ll punish the immortal soul. It’s not what Jesus or Paul thought. It’s not even what the Book of Revelation thought.

This idea of heaven and hell is really about theodicy, or why God allows evil, right?

The way it developed historically is that in the oldest texts in our civilization when people die there’s no joy or pleasure after death. You get that in Homer and in the Old Testament. Then people began thinking that’s not fair. In pagan religions it was not a problem because people believed there are good gods and bad gods. If bad things happen to you it’s because of the bad gods. Jews and Christians couldn’t say that because there’s only one God. How do you explain the bad things happening? It’s because after this life God will reward the righteous and punish the wicked. It’s all about establishing justice. After a couple of centuries, Christians wondered whether it makes sense to torture people in eternity for 25 years of bad living. So it creates still more theodicy problems.

When does purgatory come along?

The doctrine of purgatory didn’t develop until the 13th century. But the idea that some people could get out of suffering goes all the way back to the New Testament period. There were people in the early church who said, actually, everybody eventually will be saved. You start getting doctrines of universal salvation and reincarnation in the third century.

You write in the afterward that you don’t believe in eternal torment but you’re open to the idea of a happy afterlife, even if you mostly sense that life is all there is. So who are you writing for?

This is the book that in theory should have the widest audience. Just about everyone wonders about life and death and what happens when one dies. In America, over 70% of people believe in a literal heaven and close to 60% of people believe in a literal hell. So people have this fear of the afterlife and I wanted to show them their expectation of what might happen is something that came about at a certain time in human history. The ancient Jews didn’t think this. Jesus didn’t think this. So I end the book saying, it’s possible we’ll live on after death but it’s not going to be eternal punishment. In my view there’s a possibility that there’s something to hope for. But there’s absolutely nothing to fear.

September 21, 2020
Related Posts
By Sameer Yadav
Trump was right. God can be hurt. But not by Biden election, say theologians
By Emily McFarlan Miller
How Jesus became white — and why it’s time to cancel that
By Thomas Reese
Who would you choose, Jesus or the Spirit?
By Adelle M. Banks
Chicago preacher Otis Moss III uses film to honor Ahmaud Arbery, address racism
By Yonat Shimron
A new book on Tara explores a portal to the divine in a female form