(RNS) — The COVID-19 pandemic has focused many of us on the state of the nation’s health care system. As the virus rages, all Americans need to raise their voices about the deep injustices it has exposed.

Even before COVID-19 struck, the Trump administration was doing too little for the millions of people without affordable health care or life-saving medicine. As the novel coronavirus spreads, it’s no surprise that those who are hurt the most are the poor, whose health concerns are exacerbated by a lack of living wages, adequate housing, food and household savings.

The pandemic has demonstrated that everyone’s fates are intertwined with that of the poor. It reveals the costs of having a two-tiered, privatized health system – where those who can pay get care, while millions suffer and die in close proximity to some of the best medical resources in the world. This public health crisis reminds us that we all are only as secure as those with the least health care access among us.

That shortsightedness is not being remedied in our handling of the current crisis. As nearly $1 billion of public monies have already been spent on research for coronavirus treatments, the Trump administration has refused to guarantee affordability and universal access to the treatments that result from this research. As Congress and the Federal Reserve give away trillions of dollars to Wall Street and big business, bipartisan stimulus proposals still exclude sufficient and permanent help for the 140 million poor and low-income people in the United States.

In a national emergency such as this, too many people are being forced to choose between the risk of getting and spreading the virus and losing their jobs, being unable to pay rent and going without food or medicine.

This is why the Lower Drug Prices Now coalition is demanding that all coronavirus vaccines and treatments be affordable for everyone. That is why Put People First-Pennsylvania, a group fighting to protect rural hospitals targeted for closure and advocating for the human right to health care, is building a nonviolent Medicaid army of the poor. 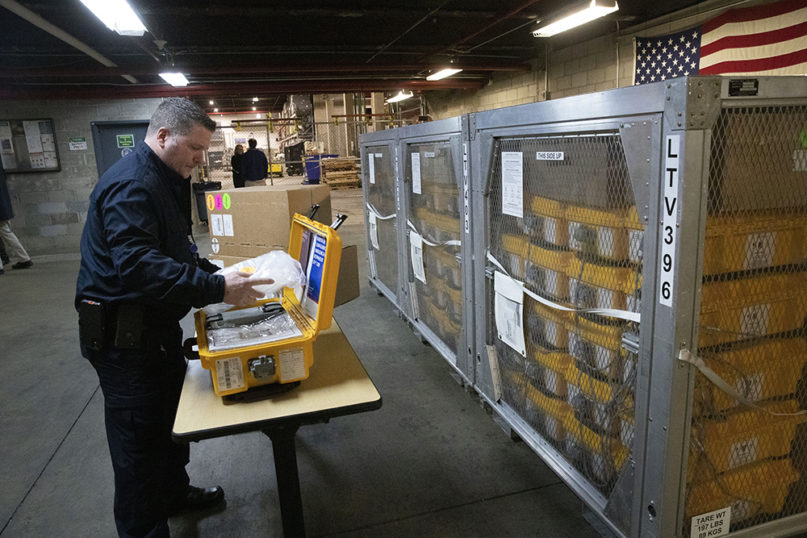 Vincent Dellova, a coordinator at the New York City Emergency Management Warehouse, packs up a ventilator, part of a shipment of 400, that arrived March 24, 2020, in New York. (AP Photo/Mark Lennihan)

I stand with New Yorkers in opposing the refusal of billions of dollars of stimulus money in order to cut hundreds of thousands of people off Medicaid in the middle of this major public health crisis.

This is why the Poor People’s Campaign continues to organize among the poor and those who are one $400 emergency away from deep poverty. We have released a petition demanding universal health care in this moment, as well as more than 20 other visionary demands.

As a biblical scholar and preacher, I look to our sacred texts, which teach that plagues always seem to arise in times of great poverty and inequality. These pandemics begin by affecting the poor, but inevitably reach to the heights of power, exposing the injustice and inhumanity of ruling authorities. In the Bible, prophetic leaders are compelled to call out the immorality of deprivation in the midst of abundance and to build the power necessary to right social and economic wrongs.

This is why our attempts to give everyone equal access to medicine can’t stop with health care reform. Last June, the Poor People’s Campaign released the Poor People’s Moral Budget, offering a path to building a better nation. It outlines a program based on a $100 billion infrastructure investment to create 1 million jobs and lead to $150 billion in economic growth; an increase in the federal minimum wage from $7.25 to at least $15 per hour to put $328 billion into the hands of families and households, who would reinvest most of it back into the economy; and on $1 billion in Supplemental Nutrition Assistance Program benefits that would create $1.7 billion in economic growth.

We have the material abundance and the technology to solve many of our immediate and long-term problems, but it will take political will built from the ground up to prioritize people over profits.

The Rev. Martin Luther King Jr. said, “Of all the forms of inequality, injustice in health care is the most shocking and inhumane.” As the world holds its breath as this global pandemic threatens the lives and livelihoods of so many, these words resonate and point us toward the real causes of our distress and the solutions necessary to build a truly healthy nation.

(The Rev. Liz Theoharis is co-chair, with the Rev. William J. Barber II, of the Poor People’s Campaign: A National Call for Moral Revival and director of the Kairos Center for Religions, Rights and Social Justice. A minister in the Presbyterian Church (U.S.A.) and a teacher at Union Theological Seminary, she has written or co-written several books, including “Always With Us? What Jesus Really Said About the Poor.” The views expressed in this commentary do not necessarily reflect those of Religion News Service.)

News
Justin Bieber’s new tour offers incentives for fans to do good, support nonprofits
Follow us on Facebook!
Submit your photos to RNS