(RNS) — It was a culture clash waiting to happen.

Pointing to the conservative Christian organization’s statement of faith, which all its health care specialists are expected to sign, they wondered if LGBTQ patients would be treated equally.

The 11-point statement of faith declares, “we believe that marriage is exclusively the union of one genetic male and one genetic female.”

Many New Yorkers were outraged. City Council Speaker Corey Johnson said he found it “extremely troubling” that Graham’s organization was involved in the city’s relief effort, and Mayor Bill De Blasio, a champion of LGBTQ rights, was immediately pressed to ensure the relief organization was “truly consistent with the values and the laws in New York City.”

Franklin Graham has a long history of spewing anti-LGBTQ hate speech and I find it extremely troubling that he and his organization are involved in our relief efforts in any way. I will be monitoring this situation closely.

Graham, a vocal opponent of same-sex marriage and a fierce supporter of President Donald Trump, immediately set out to clarify the matter. Although all Samaritan’s Purse heath care workers (doctors, nurses, pharmacists, lab technicians) must sign the statement, he told Religion News Service: “We don’t discriminate against anybody we help.”

“We provide our services to everyone regardless of race, ethnicity, religion, sexual orientation. We don’t discriminate. Period.”

The field hospital housed in a series of white tents is intended as a Christian mission. The idea is to treat overflow patients from Mount Sinai Hospital as it grapples with a surge of coronavirus cases. The prestigious medical center on Fifth Avenue and 98th Street does not have oversight over the field hospital.

Some 391 people in New York state died of the coronavirus Tuesday (March 31) alone. That brings the total number of people in the state infected with the virus to 47,349, with about 12,226 hospitalized.

De Blasio said he would send people over from the mayor’s office to monitor the Central Park hospital. New York Attorney General Letitia James added in a statement, “We will remain vigilant to ensure discrimination does not occur at this — or any other — facility.”

New York City is regarded as one of the most LGBTQ-friendly cities in the United States. Last year, the city passed an ordinance that allows a third gender option, “X,” on birth certificates, giving transgender and gender-nonconforming city residents new recognition. 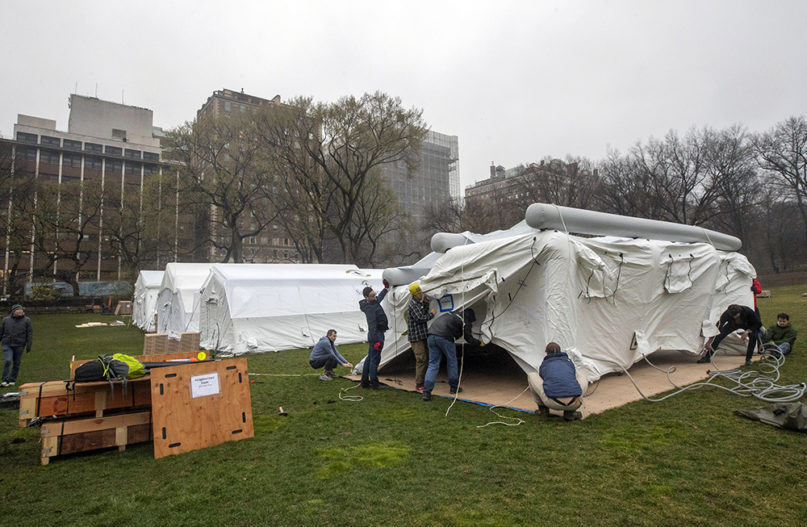 Samaritan’s Purse, the 50-year-old organization founded by Graham, who is also the head of the Billy Graham Evangelistic Association, is used to working in more socially conservative developing countries. It is based in Boone, North Carolina, and hews to conservative evangelical beliefs.

The organization may best be known for its “shoebox ministry” that sends Christmastime packages filled with personal care items and small toys to needy children all over the world. But Samaritan’s Purse is equally as active in its disaster relief efforts.

Graham estimated the New York City hospital costs about $1.3 million. It is outfitted with a respiratory care unit, including up to 10 intensive care beds with ventilators, plus a pharmacy and a lab.

“We hire men and women who believe in Jesus Christ,” Graham said. “But we don’t force our beliefs on anyone. We don’t use our faith to try to force someone to believe the way we believe. Jesus never did that. He healed people willingly and freely.”

Graham said health care workers are hired as contractors and available to pray with patients, too. But he said that if someone in his hospital requested prayers from a rabbi or an imam his staff would accommodate them.

This is not the first time Graham’s outfit has run into increasing resistance because of his strident statements.

In February, Graham was forced to seek out alternative venues for a spring tour in the United Kingdom after all eight venues reneged, saying his views on homosexuality were incompatible with the values of the British people. Graham responded by saying he would sue the sites where he had signed contracts to preach.

The tour has since been postponed.

“Every time we do anything, there’s someone who’s second-guessing and trying to throw a fly in the ointment,” he said. “It’s disappointing but it’s not going to stop us.”

On Wednesday, the field hospital treated its first patient.