(RNS) — Nearly 120 million Americans attend religious services at least once a week, according to the Pew Research Center, and as many as 50% of Americans belong to some religious organization. Based on my research on our religious communities, I believe that even with their doors closed, religious organizations can still be vital partners in transmitting accurate scientific information.

For the past 15 years, I have been studying the interactions between religious and scientific communities. While we may regard religion and science as at odds in our culture, the fact is that many Americans rely on their religious leaders to guide their attitudes about scientific findings. In my forthcoming book, “Why Science and Faith Need Each Other: Eight Shared Values That Move Us beyond Fear,” I show that 34% of evangelical Protestants and about 17% of all Americans say they would consult their religious leader with a question about science, especially science that seems to have moral implications.

The role that faith leaders can play in getting the word out about public health measures is considerable. As the director of Rice University’s Religion and Public Life Program, I host a monthly meeting at my home of 30 to 50 Christian, Muslim and Jewish leaders as well as civic leaders from around Houston. The constituents of these leaders alone number well over 300,000.

Congregants are more likely to trust not only their leaders but also those who share their faith, particularly people from their own tradition. One of the best things religious leaders can do, then, is partner with those in their congregations who are scientists, physicians or have other expertise on how viruses spread.

The interaction between religious and scientific communities can sometimes be inhibited by a perception that they don’t share the same world view. But my research shows that scientists often do their work out of a core value to heal the world around them. In my interviews with religious scientists, I’ve found that many of them have similar feelings about their work and their goals, sometimes drawing on the concept of Shalom, a Hebrew word that broadly refers to seeking the peace, harmony, well-being and prosperity that result from the flourishing of all creation. 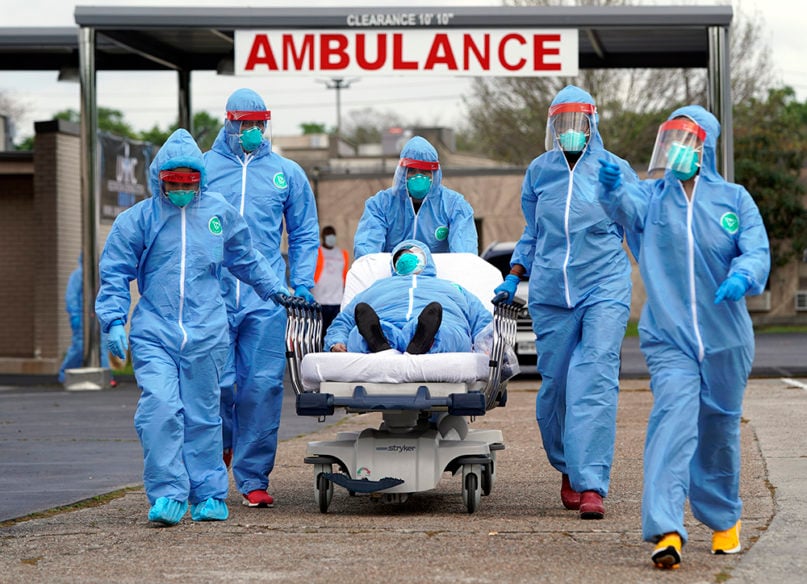 A person is taken on a stretcher into the United Memorial Medical Center after going through testing for COVID-19 on March 19, 2020, in Houston. People were lined up in their cars in a line that stretched over 2 miles to be tested in the drive-through testing for coronavirus. (AP Photo/David J. Phillip)

One immunologist told me not long ago, “I see science as an amazing tool to intervene on the human condition.”

If ever religious and scientific communities need to join together in pursuing wholeness and healing for the world, it’s now. Many studies over the past decade show us that congregations are often the first and most trusted responders in the most vulnerable communities. People are more likely to turn to their faith communities during times of anxiety and emergency.

While religious communities must help support the work of the scientific community, religious communities will also need help and support during this time. We need to think about what closing houses of worship means for those who rely on these organizations for mental health care or emotional support — and for our social safety net more broadly.

Americans will need to follow the recommendations of public health experts, staying physically distant to stay physically healthy, but many will also need their religious communities to stay emotionally and even financially healthy — even as those communities take, for the time being, a less physical but no less important form.

(Elaine Howard Ecklund is a professor of sociology at Rice University and director of its Religion and Public Life Program. Her new book, “Why Science and Faith Need Each Other: Eight Shared Values That Move Us beyond Fear,” will be published in May. The views expressed in this commentary do not necessarily reflect those of Religion News Service.)

News
Interfaith leaders join protest outside NRA meeting in Houston
Follow us on Facebook!
Submit your photos to RNS