(RNS) — They live secluded lives in a stone abbey near a privately owned forest in a rural part of eastern Iowa.

But the Trappist monks of New Melleray Abbey are not closed off from the world’s troubles.

Last week, in response to the coronavirus, the 22 monks living in the abbey, about 13 miles from Dubuque, decided to offer pine caskets to financially strapped families with members who have died from Covid-19.

So far they have not advertised beyond the Trappist Caskets website, and the orders have just begun to trickle in.

On Thursday (April 2), a family that lost five members to the virus asked for caskets. On Friday, five more requests came in.

The monks decided early on to close their guest house and church so as not to contribute to the spread of the disease.

But they wanted to do more. The men, who range in age from their late 30s to early 90s, had been offering free child caskets for years. Now they decided to offer adult pine caskets as well. (Shipping costs are not included.)

“Our traditional mode of showing hospitality has come to a halt,” said Abbot Mark Scott. “By offering these caskets to people in need, it’s another way to extend traditional monastic hospitality.”

The near-national shutdown has taken an especially tough toll on minorities and people with low incomes. More than 6.6 million people filed for unemployment from March 22 to 28, according to the Department of Labor.

With deaths mounting — more than 6,000 have died in the U.S. alone, and experts expect thousands more — the need is only expected to grow. 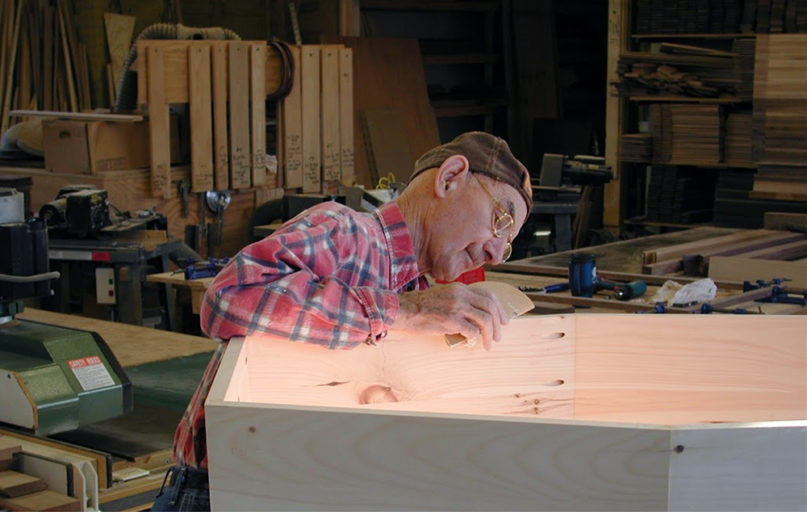 Trappist Caskets cost between $1,200 and $1,500. The company ships about 40 caskets and 25 cremation urns in a typical week, said Sam Mulgrew, a layman who directs the business.

The monks who rely on the business as their main source of revenue, are happy to keep it small.

“They don’t want a business that creates unnecessary burdens for them,” said Mulgrew.

They grow their own trees on 1,600 acres of forest — the state’s second-largest privately owned forest. They harvest mature pine, walnut and oak hardwoods and occasionally supplement lumber from other vendors.

They care about the environment and plant native saplings.

The New Melleray monastery was founded in 1849, and for years the monks farmed the land. That became unsustainable in the late 1990s and the monks transitioned to making and selling caskets.

They follow the Rule of St. Benedict, whose motto is “pray and work.”

Chief among the Benedictine values is “love of Christ and neighbor.”

So though they don’t engage outside the abbey grounds, the monks do have access to the internet and in normal times receive visitors.

Their commitment to helping at this time is all-encompassing.

“We have to keep some caskets in inventory, to honor caskets that have been purchased by customers in advance,” Milgrew said. “But the monks are prepared to give away all their caskets — even to shut down and rebuild.” 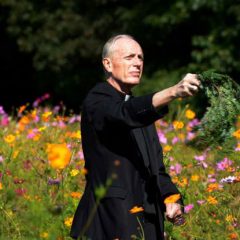 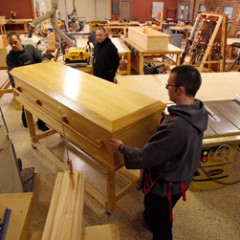 Beliefs
What one businessman learned about success from Trappist monks 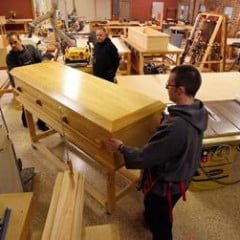 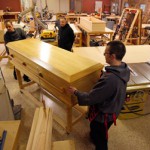 Beliefs
Monks win latest court battle in bid to sell caskets
Follow us on Facebook!
Submit your photos to RNS